Every year I try to put together a blog that wraps up our year.  In the past I’ve really enjoyed doing this but this year I’ve been putting this off, as I alluded to in a previous post, because this year’s key phrase for me has been “craptacular”.

When I think back about the year, my memories of the year are dominated with being in hospitals. I’ve battled thyroid cancer this year – but I’m now in remission.  I’ve also had to say a far too premature goodbye to my niece; which has left a big hole in my entire family.  Paling into insignificance, I also broke my arm snowboarding in Thredbo.  During times like this, you really do sit back and take stock of what is important to you.  One of the things that rang out clearly for me was just how important Gaia Resources is to me personally – it’s not just a job or a business venture to me.  It’s something I have a lot of passion for, and I love my job, and I really enjoy working with the people who are part of this thing with me.

So, despite the “crap” part of “craptacular” there’s also some “spectacular” parts.  Work wise, we’ve had a brilliant year – it’s been the most successful year we’ve had, I think, and we’ve really ridden a roller coaster ride to get to the end of it.

Our work this year has been dominated by our work with the Atlas of Living Australia (ALA).  Throughout 2010, this project has dominated the screens, disks and minds of our team here.  While I’ve been travelling around Australia talking to people about the Citizen Science software, the team back in our office in Leederville has been hard at work making it a reality.  We wouldn’t be where we are today – looking at another 18 months of work in this space with the ALA – without the hard work that the entire team has put in, including AJ, Ben K, Ben Z, Kehan and Timo in particular for their work on the software development, and for Tom in backing me up in the project management space, and helping with the User Centric Design workshops we helped run.

This ALA work has won three awards this year.  The precursor version of the Citizen Science software, which is in place at Climatewatch, won us both the Western Australian Spatial Excellence Award and the Asia Pacific Spatial Excellence Award.  In addition, our work with Museum Victoria implementing the new Citizen Science software at Biodiversity Snapshots won a Leadership in Public Programs award from Arts Victoria for Museum Victoria.  These were all really unexpected wins for us, and they really give me a good feeling we are heading in the right direction as a business.

We also won another award for the Rio Tinto Environmental Characteristics and Capabilities (ECC) project, which I’ve been involved with since the very first days of Gaia Resources.  Rio Tinto submitted the project to the Golden Gecko awards here in Western Australia, and received a Certificate of Merit for their work.  That was a pretty big thing; the ECC project has been a big part of my professional life for over five years – and even before that.  We’re going to be working on into 2011 with Rio Tinto in this area – and are hiring a new Spatial Analyst to join us to help look at some really interesting extension projects in that space.  And of course, our team behind the project here in the office – primarily Andrew with support from Akeal – has been a major part of that success.

We embarked on a few different other projects this year as well.  We’ve started hosting production sites, such as the Bushblitz site; we provide a range of services to the Australian Biological Resources Study (primarily through Mel’s hard work, when she is not working on the SWAEI project) in helping them to manage this web site, and we’ll be providing hosting services to a range of additional organizations – and continuing to use Hostaway, who have been great to work with, and the fact that they’re even greener than us is our primary reason to continue to use them.  How many green data centers do you know of?

Akeal and Charlotte started a new type of project this year, too – they are now “embedded” (that’s an AJ phrase I picked up) at Woodside, helping them with their spatial analysis and other work.  This is something that Charlotte will continue in 2011, with Akeal helping out for a couple of days a week.  Both Charlotte and Akeal are keys to the success of this project, with their dedication and desire to do the right thing standing us in great stead.  Charlotte, in particular, will be getting a huge amount of experience and knowledge in her first year out from university.

Incidentally, Charlotte is our longest serving employee (except for me!) and started with us as a recipient of our Curtin University Spatial Sciences scholarship, which we ran again this year, with Sean Gilmore receiving the award.

Backing up the people I’ve mentioned above are three very important people; Corinne, who has been at our front desk for a while now, and our two new staff; Lyn, who is on board to help manage our systems, and Sarah, who is on board as our accountant.  These girls are not people you’d see much of, (well, except for Corinne when you drop past our office), but they are really critical parts of our business and their inputs have been a big part of our success in 2010 (and will continue to be in 2011).

In the new year, we’ll end up with another two staff – another spatial analyst, but also another developer, who we’re still recruiting for.  We’ve got loads of interesting projects on the books, including work with not-for-profit conservation groups, mining companies, natural resource management groups, state and federal government and a few private companies thrown in as well.  So I don’t think we’ll be bored in this upcoming year.  Sadly, I think we’re going to be doing some of the things I was thinking about avoiding after seeing David Suzuki talk – we are going to grow again this year.

However, I’m also passionate about our other plans for making the business “greener” (i.e. reducing our environmental impact) but also including a few more social responsibility aspects.  The ball is rolling with our landlord to put up some solar panels on the roof, and skylights that will make this a better office (or so we think!).  We’ll also be looking to kick off a more formal student mentoring process – we’ve tried a few different things this year including mentoring software engineering students over at Curtin, but I also want to start helping out biological sciences students as well.  And of course, we will continue to be an open source company, and are looking to release a few more of our tools and projects as open source software in 2011 (the best move we made this year was moving to Zimbra and away from Exchange!).  I’ve got a few other things up my sleeve as well… but I’ll see if we can walk before I commit us to running a marathon.

Another thing I really want to work on is our vision, which I think is especially important to Gaia Resources.  One of the problems of 2010 has been how busy I’ve been (see my wall calendar below – yes, I still use one as well as my Zimbra calendar), because I’ve been too busy do-ing and not enough time direct-ing.  2011 will see me work harder at trying to realise that.  And to start with, I’ll be taking the week between Christmas and New year to recharge my batteries and sketch out new plans for the company; so that when we come back for our strategy day on the first day back, where I will be able to articulate our vision for 2011 to all of the staff at Gaia Resources. 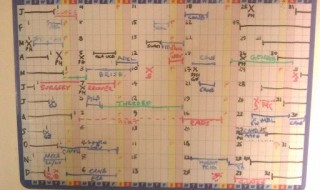 So finally, I just wanted to say that all of this would not be possible without the support we get from our colleagues, clients and suppliers all over Australia and across the world.  We are very grateful for all the support we’ve received this year, and look forward to working with you all in 2011.

I hope you all have a great break over Christmas – you can try to catch me on email, Twitter or by leaving a comment below – but please don’t expect a reply before we are back on deck on the 4th of January, 2011 – or on Friday the 24th December, because we’re all going sea kayaking for the day.