Over the past month or so, we’ve been working on the Perth Zoo Tiwest Night Stalk implementation of the Biological Data Recording System software, putting it into action for that particular project.  Last night, we got to get out and run a Night Stalk ourselves. So, off we went to Thomsons Lake in the southern areas of Perth, happily festooned with head torches, lights, mobile devices, insect repellant and kids… and had a safety briefing first, of course!  Once we’d talked that through, we set out the Anabat unit to record bat calls, we were off for real. 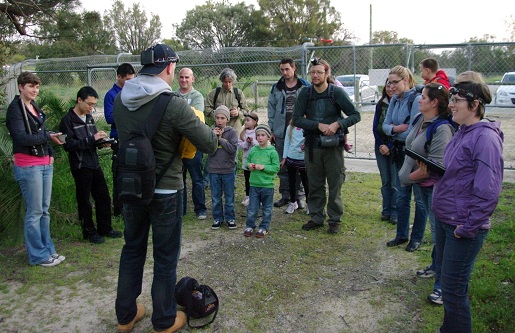 Safety briefing and planning for the Night Stalk

Once we were all aware of what was going to happen, we appointed Ben as the scribe and went out looking for what we could find. We all had different highlights, so I thought rather than try to paraphrase them we’d just let the people who were there say what they thought were their own highlights: 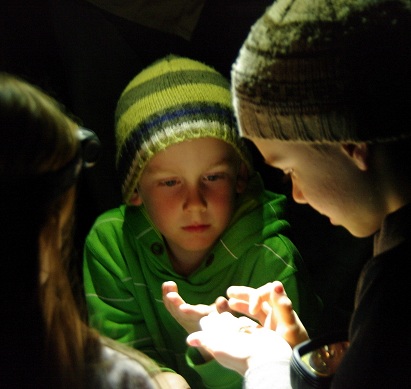 The kids get to hold a Crinia glauerti (gently of course)

For me personally, this was a great event.  I got to go and buy a torch (well, more of a portable tanning device) and get back to my field days for a brief period of time.  Thankfully, I’d done a recon trip the weekend before, and knew what to expect – and now that my health is back to “normal”, I’ve actually been getting out most weekends birding, so my calls are getting better (helped along by the fact I own a copy of the BOCA Bird Call CDs!).  That significantly helped with my ids – if I had to narrow it down to a single highlight, it would be taking a group of people who’ve never really done this out in the field, and seeing them interested in the environment that they live in.

The end results of the trip?  Well, here’s a species list:

Our records have been submitted to the Perth Zoo Tiwest Night Stalk site, and you can view all of the results on the site by going to the publicly available map located here.

I would like to say thanks to all who came along for the Night Stalk, especially Andrew and Natalia who came along (and who can identify frog calls, and also catch them very quickly!).  I think it was a great success and we will be back out there doing more things like this in the future.

Posted in Blog
« Birds Australia (WA) GPS Training
What does gaming have to do with Environmental technology? »