Once again it is that time of year, where we get to reminisce on the year that was.  It doesn’t seem that long ago that I wrote the 2011 one!

I’d describe 2012 as a real rollercoaster ride, and have been doing so more and more towards the end of the year.

We’ve worked on a range of projects over the year that have been highlights, ranging from volumetric calculations for waste dumps to volunteering on birdwatching trips in the Pilbara but there are a few projects that deserve a bit more attention in the end of year lineup…

This year our contract with the Atlas of Living Australia finished up, and that was a big challenge for us as a business.  The Atlas has done some good work and ending our contract unexpectedly early gave them more budget to keep staff on for another year.  Since then, we have maintained collaboration with the (smaller) Atlas team in developing the Biological Data Recording System (BDRS).  We have also landed many new clients who are using the BDRS for a range of different uses – and we are looking forward to announcing some new ways in which people can use the BDRS in the new year, so stay tuned for announcements around that space.  There are now somewhere in the region of 30 different organisations using the BDRS – including our own team, where this week we passed 14,000 records of birds, bats, trees and even coffee shops in our own implementation – over 90% of the records are birds and that’s probably down to me recording over 11,500 bird observations.

Another one of the highlights has been the publication of our first app, the ESA2012 conference app (see the announcement blog here from Steph and a follow up from Kehan). The app allowed the ESA2012 delegates to select the talks that they were interested in from the supporting web site, and the app then downloaded each delegate’s personal program to their Android and iPhone devices.  We set this up using open source frameworks, and we have this ready to be used again for other conferences in 2013.  If you are interested, then contact us and we’ll see what we can do for your conference – we’ve actually had a few conferences follow up already. 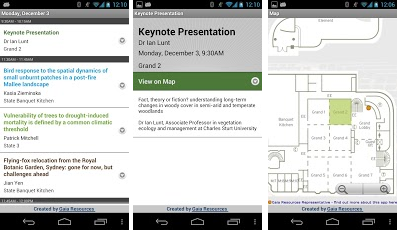 For me – and Kehan and Steph – most of the last few months have revolved around work with the Department of Culture and the Arts.  Earlier this year, we won and have been working on a project to implement open source collection management systems in the State Records Office (SRO) and the Western Australian Museum (WAM).  These projects have been something we’ve been wanting to do for a while, and we’ve finally been given the green light.  So we are working at the moment – and have been for a while – on replacing the different systems at these organisations with open source systems, and migrating data to the new platforms.  At the moment, we’re working with ICA-Atom at SRO and we’re using Collective Access at the WAM.  In addition to that, Kehan has been working on the Waminals project – stay tuned in the new year for more information on that, or check out his Slideshare presentation below.

On the social side of things, we’ve had a bit of fun during the year; and for those staff that came along to see Sir David Attenborough live in Perth was a highlight.  When we heard that Sir David was coming, we immediately booked out as many tickets as we could and many of us from Gaia Resources went along for the event.  Over the years, I’ve met many of the people that led me down this path to where I am today, and been inspired again by them – this was certainly no exception.

We’ve been to a wide range of conferences in 2012, as well.  Charlotte and Andrew started the year with the GeoNext conference,  Tom got to go up to Kalgoorlie for GEMG, Grit and I got to go to the Australian Bat Society Conference, Kehan thoroughly enjoyed the ESA 2012 conference and my personal highlight was the Spatial Information Day in South Australia, as well as the OGEO Conference here in Perth.  So we spent a lot of time in the year at conferences learning and networking – there were some really interesting outcomes from those conferences, and we’ve presented on a wide range of subjects as well.

When we weren’t at conferences, we were also doing sprints.  These have become of a tradition for us, ranging from setting up imagery web services and the big Townsville sprint that AJ undertook with our not-for-profit partner, Sciencemob.  I have to say, this was one of the best videos on our sprint days (thanks to Scott Mills’ great work on it) – the shot of AJ losing it at the start still cracks me up.

There were a few more sprints in there that we didn’t get to blog about, and there are some more planned for the start of 2013, including some with one of our clients – which will be a first for us.

Speaking of Sciencemob, I have been acting as the Treasurer for that organisation all year (with help from Tamara, who has been handling the book-keeping).  This goes along with our aim to support the industries that we work in and to give something back.  To that end, I’ve become a Director of SIBA and the Western Australian Chair, and Tom has maintained a solid involvement with SSSI.  Both of us have also been involved in 2012 in the organisation of Georabbles here in Perth, which have been very rewarding.  Unfortunately, the demands on my time meant that I have had to drop out of my council role with Birdlife Western Australia, although I am still maintaining some involvement with the local group.

So, looking forward, what do we see happening? As we look into our crystal ball, we see the continuing shift towards mobile data collection as both hardware (phones, tablets, etc) and software (like our BDRS and mobile apps) really comes of age. Data management systems are going to shift from being the focus to the enabling underlying technology that enables better data interoperability, availability and mobilisation.  Meanwhile, the spatial side of things continues to mature – it’s less about digitisation and cartography and more about remote sensing, analysis and data processing.  We truly belive that there are many opportunities out there in all of these spaces in the new year, so we’re heading into 2012 with a positive outlook.

Christmas presents (oh, the pun!) an opportunity to us as a small business to get a whole heap of things done in the break that we didn’t get to this year.  I’ve got a long list of things on my whiteboard to get done on the “break” that I’m really looking forward to getting done, and resetting us for the new year.

See you in 2013, and have a happy holiday season from all of us at Gaia Resources.