Editors note: What many people may not know is that we’ve been working with Jessie Oliver on a few citizen science projects, and as a result we also sponsored her trip to the Citizen Science Association conference (#CitSci2019) this year, in Raleigh, North Carolina.  This is the first of two blogs that she has written for us; stay tuned for the second one next week.

The #CitSci2019 conference hosted through the US-based Citizen Science Association in Raleigh North Carolina was nothing short of brilliant. I am beyond grateful to the team at Gaia Resources for their supporting my conference travel to continue my endeavour of exploring technological advances in citizen science globally.

In this first blog, I’ll cover the conference, and explain more about what you can do to get started with a citizen science project in my second blog.

One of the key ingredients to getting involved in citizen science is a passion for a particular area of science, be it one of the natural sciences, chemistry, physics, health computer science, or some topic that falls under the umbrella of science. For citizen science to work, however, there are also a broad suite of other critical roles and considerations that help to plan getting a project get off the ground, ensuring it’s sustainability, and maximising it’s potential benefits to science and society.  A starting point is to look for others who are similarly interested.

If you are interested in connecting with citizen science groups, know that there isn’t a directory for this yet. It’s worth noting, however, that several exist and more are on the way. Currently, for example, there are Citizen Science Associations established in Australia, Europe, the United States (US), and Asia. We all work cooperatively through a number of global working groups, which certainly would not have been nearly as feasible without the Information and Communication Technologies we all take advantage of today!

Each of these groups also uses a suite of communication technologies, from social media, to websites, email lists, and online communities to exchange information with their respective members as well. It’s worth checking these out to get an overview of what is happening in your region. In Australia, for example, several states have created regional chapters of ACSA, which might have activities you can dive into. If your region doesn’t yet have one, it’s never too late to start one! If interested in communications and citizen science advocacy, there is plenty of need for such movers and shakers!

While at #CitSci2019, I was elated to learn of several emerging groups and the citizen science these groups represent! Did you know there is an emerging group for Iberno-America? For those who are like I was and are unfamiliar with the term “Iberno-America”, this refers to all countries where Spanish or Portuguese are predominant languages. While attending the symposium “Towards Forming an Ibero-American Citizen Science Association”, I learned a huge amount about citizen science in these regions and complexities with forming a network we don’t need to consider here in Australia. Those of us involved with other established and emerging associations also happily exchanged our experiences during this symposium. To learn more about this forming group, check out the Ibero-American citizen science website, which Google can translate if you use Chrome as your web browser. 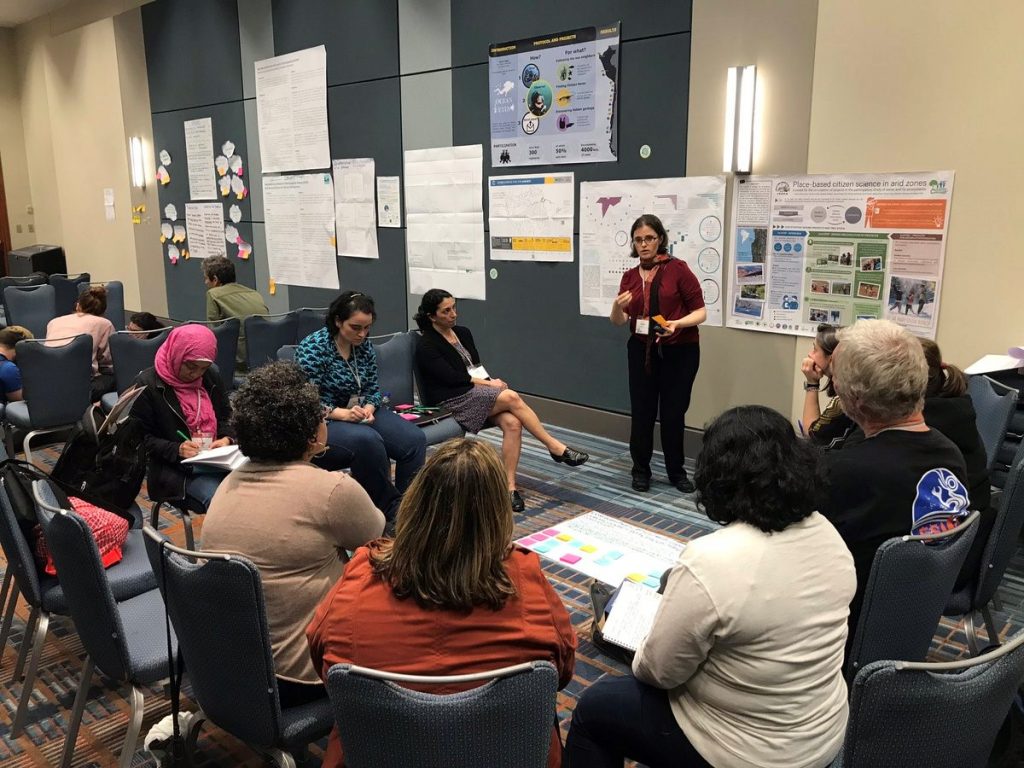 Jessie (standing) providing some insights into what went into the formation of the Australian Citizen Science Association over the past 5 years at the workshop (photo credit: @redricap)

#CitSci2019 also had one of the most thought provoking and important keynotes given by Dr Max Liboiron I have ever heard to date, entitled “The Power (Relations) of Citizen Science”. Dr Liboiron’s keynote unpacked a nuanced perspective on complexities of power dynamics and values such as equity and humility in relation to science. When discussing equity, Dr. Liboiron even gives a strong example of how instrument design can strongly influence who can contribute (and who can’t) using standard protocols and the importance of place-based design, particularly when trying to quantify marine litter.

As I listened to this keynote, I drew many parallels to my own professional work. Whether working as an ecologist or environmental educator in my past lives, or a technology design researcher now, this point articulated how I have strived to work:

“… we do research with people who don’t have science degrees and that science works–and by “works” I mean that people without science are invested in the work they do (because it’s theirs). They’re invested not because it’s my really good idea and I invite them to come in, but because the projects are theirs and I’m there to facilitate it.”  ~ Dr Max Liboiron

Seriously, I recommend checking out the thought provoking summary of this keynote address!

Technology often plays a critical role in citizen science (and more on that in my next blog), whether by making data collection and analysis possible, improving data quality, disseminating information, fostering learning, making activities playful, and more. Often the practices for designing technology, however, is currently given only a little discussion within the citizen science community. With this in mind, I proposed a symposium titled “Designing technology to maximize cultural diversity, update, and outcomes of citizen science” with other technology designers from the US and the United Kingdom, implementing Human-Computer Interaction (HCI) and User Experience (UX) design strategies. I aimed to find folks with particular skills in designing for a wide range of people and purposes, including designing technology for citizen science that includes education, accessibility for non-literate people, data management, technical infrastructure, online engagement, and conservation.

Together we ran our collaboratively created symposium, asking each other and the audience questions. After two-minute introduction from panellists, we allowed the symposium to flow very organically with heaps of audience contribution, so while we only got through two of the nine planned questions, we had an incredible discussion as a team of about 40 people! It was clear to us that there is a real interest for the citizen science practitioners, citizen scientists, technology designers, and technology developers to work in close partnership.  With such an enthusiasm for the topic being evident, on the fly, we all collectively decided to keep the discussion going, and we created a #CitSciCHI Google Group. Anyone interested in technology design is welcome to join!

If you are keen to read more about the discussion that took place and to read all related tweets from our symposium, be sure and check out notes via Muki Haklay’s blog post, which Michelle Neil wrote up during our symposium. What delightful crew to create a symposium with and even the summary was co-created. Go team!

I hope you found something fun and useful in this blog that highlights just a few considerations for technology and citizen science. If you have any questions at all or would like to suggest other areas of citizen science and technology that deserve more discussion, don’t hesitate to let me or other folks at Gaia Resources know (via their social media channels or directly through to Piers or Alex).  Stay tuned for the second blog that will be all about technology considerations and how to find out about, or start your own, citizen science projects – coming next week.