Last night I went to the Golden Gecko awards presentation, as our work with Rio Tinto on the Environmental Characteristics and Capabilities project was part of a submission this year. Much to our delight, the submission took home a Certificate of Merit!

The Environmental Characteristics and Capabilities project has been a major project for us since our inception as a company. Some of the important outcomes for Rio Tinto have been:

Importantly for me personally, we have also developed systems that are now being actively managed by Rio Tinto staff. It was important for me from the start that we build something that was sustainable for – and by – the client. We took into account the systems already there at Rio Tinto, and worked with them, rather than try to put in a completely new system.

Anyway, over the past few months, we have been working with Rio Tinto on preparing their submission for the Golden Gecko award, including a quick trip up to Rhodes Ridge (see picture below with the team) to demonstrate the system from start – when data is collected by consultants – through to the end use of the data, in the cabs of the dozers like the one in this picture. 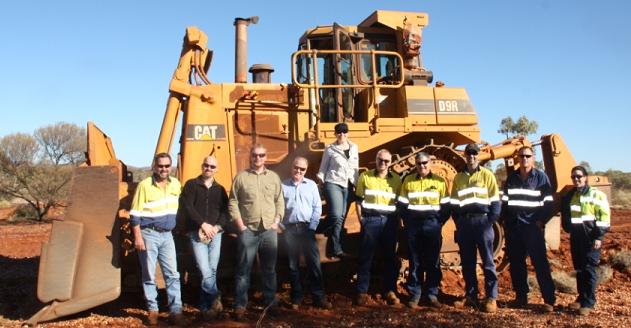 At the awards ceremony last night Rio Tinto brought home a Certificate of Merit.  While this isn’t the main award, out of 11 applicants, two major awards were awarded, and two Certificates of Merit.  I was really impressed with the quality of the applicants, and hopefully we can all get together in the future to share more information on our applications.

Our work on the ECC project has involved many people – just about everyone in Gaia Resources has worked on it in some capacity. Like most things we do, this was very much a team effort, and it was great to be rewarded with some recognition for our work.

If you want to know more about the ECC project, some details are on our web site, or drop me a line via email.

Posted in Blog
« Milestones in August
A visit from Batman »