Back in July 2012 Gaia Resources started on a project with the State Records Office (SRO), to help with the replacement of their archive management system.  Over this period we assisted with the evaluation, testing, migration and further development of the systems involved, and a couple of weeks ago the project went live and can be seen at http://archive.sro.wa.gov.au/.  At the launch the new system contained 804,023 items, arranged into 4843 series that have been accessioned through 5865 consignments from 1919 agencies – not a small project! 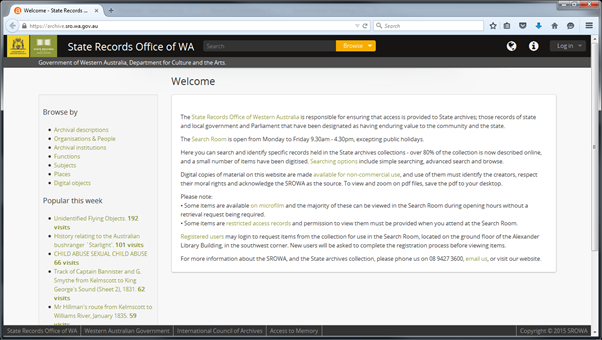 The full history of the project is well wrapped up by Lise Summers from SRO on their blog and a good summary is also in the AtoM wiki under the “Success Stories” part of their wiki.  So with those other summaries out there, what we thought we’d cover in this blog was our experience along the way, and some of the open source technologies we’ve used as well, with the focus being on Access to Memory (AtoM).

We’re no stranger to open source products, given we have produced our own (namely the BDRS) and we work with a number of others, including CollectiveAccess.  AtoM is an open source product, and so we’ve been working with the developers as well, and have contributed a range of things back to the codebase.  We’ve created or upgraded a bunch of AtoM functionality including loans, reports, importing data, user registration, as well as the inclusion of the Australian Series System.

Technically, we implemented the Australian Series System by creating new plugins, one based on the  built-in International Standard Archival Description plugin (for archival descriptions), one based on the International Standard Archival Authority Record plugin (for agencies/”actors”), and one for accessions (consignments), but with modifications in each to suit the Australian Series System.  Then we changed the routing rules so that everything goes through our plugins rather than the built-in “International Standard” ones.  Now that we’ve had a chance to catch our breath on this project, we’ll be looking at pushing up all these contributions to the source code for AtoM in the near future, so that they become available to the entire archives community.

We implemented AtoM within the infrastructure of the SRO’s host Department, the Department of Culture and the Arts. We’re planning to extend this work further by doing more on the digital archives– the plan is to ehance the system with the use of the open source Archivematica software. The work we have done with DCA for AtoM was, in part, a pilot for Archivematica, and for a specific reason – the State Records Act.  This Act prescribes where you can store archives, and to do so on servers that are not hosted in Australia would be in breach of this Act.  So, we have worked with the DCA infrastructure team to use the virtualised environments available to ensure that we are not in breach of this important piece of legislation, when we start working on digital archives. This will be another step towards providing the full digital archive component within the State Records Office.

Behind the scenes over the last few years of working with the SRO we’ve had a number of our staff involved in the project.  Over the course of three years, Steph, Mel, James, Lyn, Debbie, me, Serge, Adam, AJ, Kehan and Ben New have all participated in this project, and it’s been thanks to Kehan, Ben New and AJ getting it over the line in the last few months that we now have a project to celebrate. As a result of all this work – and a range of other projects on collections – we’ve now developed an internal “Collections team” – but that’s a blog post for another time.

We’ve learned a lot from this project (especially about archives, as well as archivists!) and it’s been another one of those proud moments where a lot of hard work has delivered a great outcome.