Last week, late local time on a Wednesday night, I was excitedly listening and watching presentations, writing notes and tweeting as a result of the the Digital Preservation Coalition’s (DPC) online seminar “Where are we now? Mapping progress with geospatial data preservation”.

When we saw that the DPC were putting on an event that included both archives and spatial data, I was super keen to be involved.  My first degree in Geography was all about spatial data – the love of which persisted through my ecology and environmental stage of my career to see the creation of Gaia Resources.  Along the Gaia Resources journey, as I talked about briefly at the recent Archival Society of Australia WA branch meeting, we have ended up working with Archives all around Australia… and then suddenly there was the DPC event, combining those two topics and giving me an excuse to stay up late and enjoy myself.

The event itself was run online, and included a series of talks followed by a short question and answer piece at the end, with some good breaks in between to present attendees from going mad looking at a screen for four straight hours.  The event itself was expertly facilitated and run by the DPC staff, which is still no mean feat these days.

The talks were varied, and included groups from a variety of organisations and industries, including: 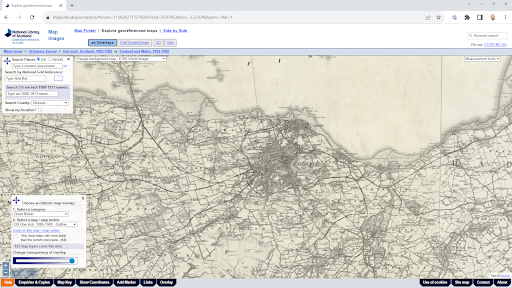 The National Library of Scotland “Map Images” website – find it at https://maps.nls.uk/geo/explore/

There was a lot of content in here to digest, and I pulled out a few points that I’ll summarise as the highlights for me, which were:

I was also pleased – and somewhat relieved – to see a whole bunch of things in the talks that reminded me of work that we’ve done.  Apart from the example of our digitisation work in the mining sector here in Western Australia, the National Library of Scotland “Map Images” site is our Retromaps project on steroids, and there was a fair bit of thought around the use of GeoPackages, which we’re building into several of our larger data collation and aggregation projects at the moment.

It’s definitely useful to see historical data, and making it available is a challenge. We had a go at @gaiaresources with the Retromaps project with @StateRecordsWA https://t.co/PmFxm92qPi #dpc_geo #archives #spatial

This was my first introduction to the DPC – I’ve heard about them before, but never been actively able to participate in an event.  It certainly was worth staying up late to get these different perspectives and how these different players deal with those challenges of archiving spatial data.

If you’d like to talk more about the event, or find out more about how we’re working on capturing, managing and archiving spatial data in a range of industries here at Gaia Resources, feel free to drop us an email or start a conversation on our social media platforms – Twitter, LinkedIn or Facebook.

I must also say thanks once again to the team behind DPC, and all of the speakers, for an interesting Wednesday night!