Bushblitz is a biodiversity discovery partnership between the Australian Government (ABRS), BHP Billiton and Earthwatch Australia, which over the past 18 months has succeeded in discovering over 500 new species on a large number of total biological inventory surveys throughout Australia. Gaia Resources also hosts and maintains the Bushblitz web site, and has had an active involvement in Bushblitz for some time.

The Bushblitz partnership had been invited on to Ned’s Corner Station to produce a biological inventory. The station is a former sheep range that has been added to the National Reserve Network through funding from the Federal Government and the Trust for Nature.  So, following on from our past field trials, last week AJ, Timo and myself went out on some field work testing the mobile data recording components of the BDRS as past of the Taxonomic Research and Information Network mobile data capture project. They’ve all worked really hard and had a lot of fun working with the cross disciplinary team from a large number of Australia’s biodiversity institutions.

We arrived just before midnight on Sunday after a short flight to Adelaide and then a long drive up to the Northwest corner of Victoria to discover that the Bushblitz logistics team had already put up some tents for us. We soon got the Anabat set up and the data logger on that just started going crazy which gave us a clue that we were in the right place for a biodiversity survey.

Next morning we started early and had chats with various scientists about what we were going to be doing over the next few days. A lot of people were interested in the potential of something that could streamline workflows and the double handling of data and wanted to see it working for themselves. We then double checked the custom forms and survey methodologies (AKA ‘Census Methods’ in the BDRS) with a number of scientists and made some last minute changes to the forms thanks to the flexible capabilities of the BDRS before downloading the form definitions and workflows onto the menagerie of mobile devices that we’d brought with us. Finally after lunch Timo I went out to start doing some real fieldwork. I scratched my botanist itch and went out with Val and Andre from the National Herbarium of Victoria and Dave from the Northern Territory Herbarium. Timo went out with the two Karens from the mammal team at Museum Victoria and AJ stayed in camp to keep an eye on the server and on the new records coming in from the field devices. 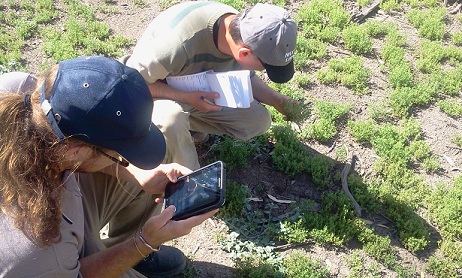 Over the next couple of days we all spent hours in the field helping the enthusiastic scientists record data, set traps, empty traps, catch reptiles, survey birds and get bogged vehicles out of the mud. We learned the ins and outs of every kind of trap on the market including Malaise and Pitfall traps for invertebrates and Elliots, pitfall and snap traps for mammals and reptiles. GPS coordinates and altitude were taken by hand and written down for each collecting locality. What became obvious to us all was that the field work day is a long and busy one, and the work was only half done by dinner time. Most of the scientists then spent the evening identifying, expanding their field notes with additional information and  preparing and processing any specimens they had collected so that they could be accessioned into their respective collections. All of them weren’t looking forward to the task of capturing and cleaning all their data on their return.

Over the course of the three days in the field we managed to log a records in a variety of surveys using a number of different methodologies. We managed to identify several easy to fix issues with the mobile tool that will greatly improve the user experience should they all be successfully implemented.

A sample overview map of records can be seen in the screenshot below – this is the bird survey that we were carrying out as a team as this is a group we were all reasonably all familiar with and we also have a bit of a competition with our director as to which species we’ve managed to twitch.

A lot of our clients know that fieldwork can be really good fun and really challenging, but it was good to get some of our developers exposed to the conditions that our clients experience. We got bogged in the mud, caught 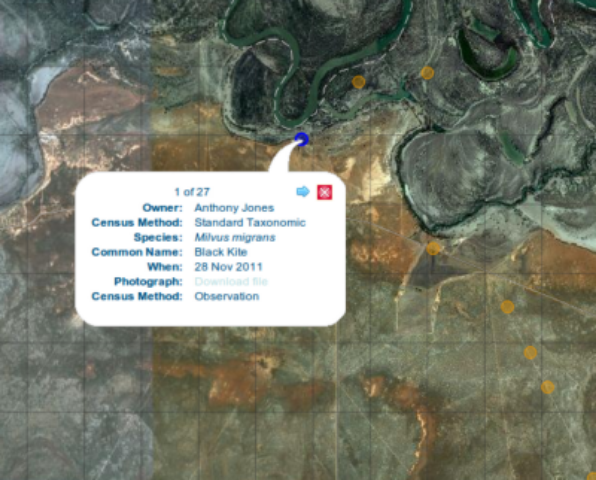 spiders, spotted birds and even went on an after dark reptile spotlighting expedition.

Here’s a slideshow of images either taken by Museum Victoria staff (most notably Mark Norman who is an excellent and prolific photographer) and the Gaia Resources team with their various phones, tablets and cameras.

Val Stajsic from the National Herbarium of Victoria asked AJ if he could convert UTM coordinates into something he could use to find collecting localities on a map. AJ decided to go one better and dump the coordinates out into a KML file that Val can now use in in Google Earth should the need arise. We then also discovered that you can point the Android version of Google Maps directly at a KML file on the web and it will map the points for you. I quickly uploaded the KML file into my Dropbox account and hey presto – a collecting map: 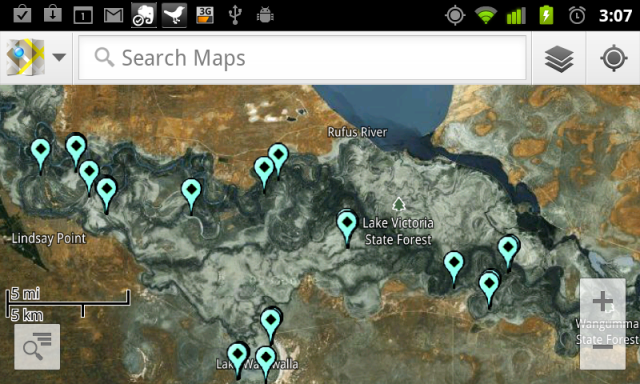 As a result this the three of us Gaia staff found ourselves guiding the botanist team via radio in to a collecting locality. Google’s imagery told us there was a track where we could not see anything directly as weeds had covered up the track. 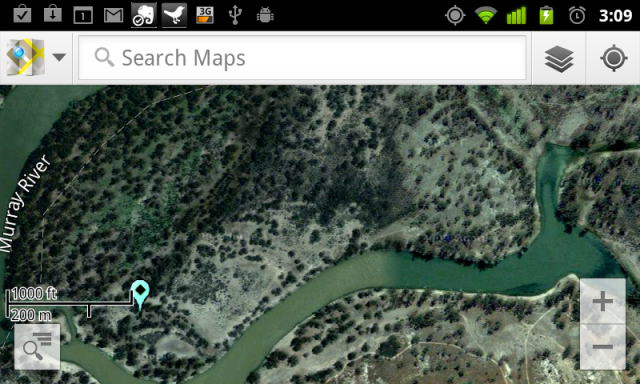 What about Battery Life? Rain? Dust?

I thought I’d put in a few observations on these things, and some thoughts for the future. Firstly, AJ’s car kit went really well with the Samsung GALAXY Tabs that Piers managed to pick up several months ago. We’ve been looking also at solar chargers, backpacks like the Voltaic Spark Tablet Case or even solar clothing. And in terms of general protection for the devices, as we are talkling consumer grade technology there is a whole ecosystem of suppliers that have answered the call of ‘I want something that will keep my device dry / dust free / unbroken’ including the Otterbox Defender series that’s even available for our tablet devices.

We all really enjoyed the trip – it is not often that we get to mix with so many leading scientists from such a great range of institutions. Timo summed it up well with his experience – he had a photo of a spider that one of the mammal pitfall traps had caught, and he went to Dr Barbara Baehr who then went on to suggest a website created by one of Australia’s leading Wolf Spider (Lycosidae) specialists , Dr. Volker Framenau who has this exact species as being listed as a member of a new genus. Bushblitz is great as it brings people from a whole suite of disciplines together to work on a great project.

The pleasing outcome for us was that the many scientists we worked with over the course of the trip could see that by using technology such as our tools, they could free themselves up from the data entry burden when they get back to the office.  I think that having us there as a team to support them in the field worked really well, and we had some great discussions about how they could use this sort of technology in the field – ranging from collecting data at the trapping site, knowing that you’ve hit a permit limit for a species, knowing where to go, or tracking where the teams are currently at.  There are many benefits to using technology in the field – our job is to minimise and remove any (real or perceived) risks.

In terms of our mobile software we found that the software setup coped well with custom forms (AKA field data sheets) and census methods (AKA defined methodologies). We found a few easy performance and user interface enhancements which will be going into the mobile tool ASAP. In addition to our software the great variety of other apps available in the various market places really makes commodity smart phones / tablet computers very useful tools to have in the field.

Our aim on this project was to get a prototype field data collection system up and running.  I think we well and truly achieved that, and a whole heap of additional outcomes that came about by just being on the trip itself.  Watch this space for more fieldwork / biogeekery…

Posted in Blog
« Spatial Reports with Java and Python
Behind the scenes: Testing the BDRS »