A few years ago we developed the Urban Wildlife app for the Clean Air and Urban Landscapes (CAUL) Hub.

The app allows the community to record sightings of certain urban wildlife species, which feeds into research and evidence-based management of these species. First launched in early 2017, it originally included modules for flying foxes, beneficial insects and some species of frogs.

We are very excited to have added a possum and glider module recently, as part of a collaboration between the Threatened Species Recovery (TSR) Hub and the CAUL Hub.

There are 27 species of possum and glider across Australia, so to save users scrolling through all 27 species when making an observation, we configured the app to provide a customised list of species for each user based on their current location (using a geofencing approach). 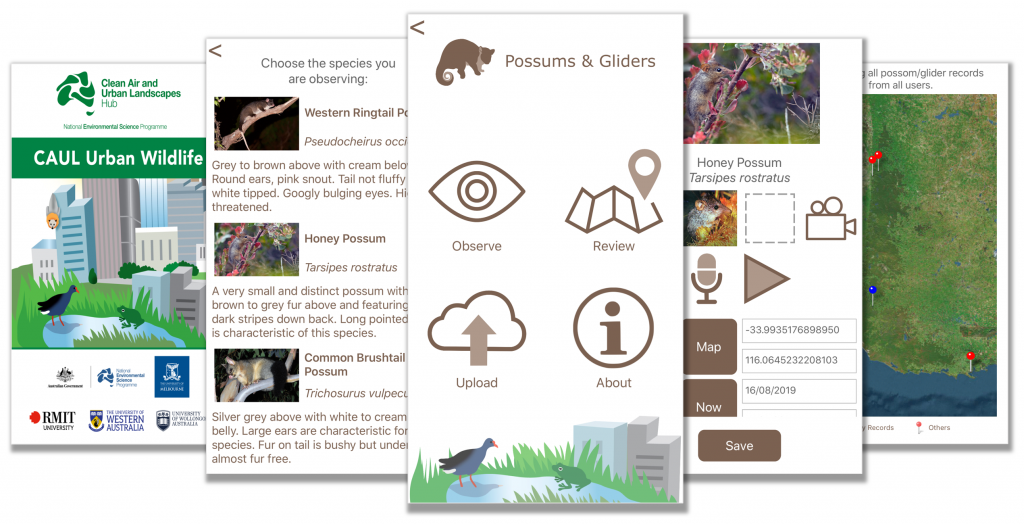 Possum and glider module in the CAUL Urban Wildlife App

I really enjoyed working with lead researcher Dr Rochelle Steven (University of Queensland) on this new module. Rochelle is very passionate about Australia’s possums and gliders and believes people in the community can do a lot to help support better conservation, especially in urban areas.

“Some people think urban areas are not important for threatened species conservation, but some species are only or mainly found in urban areas, like South Western Australia’s Critically Endangered western ringtail possum,” said Dr Steven.

“Almost a quarter of our possums and gliders are listed as threatened under Australian environmental law, and many more show signs of decline.

“The main threat to Australia’s possums and gliders is habitat loss, but in urban areas, dogs, cats, being hit by cars are also major problems.

“Knowing where species are and how they are using the urban environment is an important first step to conserving them, and we are calling on citizen scientists to help us by submitting sightings through the CAUL Urban Wildlife app”.

In this video, Rochelle describes her research into using citizen science for the management of threatened species, and the addition of the possum and glider module to the Urban Wildlife App.

Citizen science is surging in Australia, and represents a huge opportunity to engage the public to support threatened species conservation. Dr Rochelle Steven from the University of Queensland is working with citizen scientists and local partners to support the conservation of the Critically Endangered western ringtail possum, and has just launched a new possum data collection app. This Threatened Species Recovery Hub project is a collaboration between The University of Queensland, The University of Western Australia, South West Catchments Council (SWCC) and the Clean Air and Urban Landscapes Hub. It receives support from the Australian Government’s National Environmental Science Program.

For more information about the research project see the TSR Hub news.

The possum and glider citizen science project is a collaboration between the Threatened Species Recovery Hub and the Clean Air and Urban Landscapes Hub, with funding from the Australian Government’s National Environmental Science Program and the National Landcare Program through the South West Catchments Council.

The CAUL Urban Wildlife app is freely available on both iOS and Android platforms, and can be downloaded from the Gaia Resources pages on the Apple App Store and the Google Play Store.

For more information about the modular approach and technical solution we implemented for the Urban Wildlife App, please see our project summary.