After Friday, I realised I needed to start planning for the conference silly season in November, at first to see if I can get to Wellington for the SSSC conference where the Asia Pacific Spatial Excellence Awards (well, the individual ones!) will be presented.  When you work across a range of industries like we do(“environmental”, spatial and software engineering), there’s quite a few conferences to consider.  Here’s what’s on our radar for the rest of the year (in chronological order)… let us know what we’ve missed!

WALIS is the big, vendor-independent, spatial showcase event, and it’s a great opportunity to catch up with our colleagues, friends and clients in the spatial industry.  We went to WALIS in 2009 and Andrew presented a paper on our work with Rio Tinto and data standards.  We have had a stand in the past, but this year we’re focusing on attending, and I’m giving a talk on Citizen Science and the Environment (in the Social Impacts stream – see http://www.isde7.net/program/program-streams/the-social-impacts-of-the-changing-world).  All of our spatial team will be dropping past at different times and days to see what’s going on, so if you see one of our team, say Hi!

This was a conference Andrew and AJ went to in 2009 when it was in Sydney, and that was a really interesting conference for them both. As much as I’d like us to get to more of these international conferences, I don’t think we’ll be making this one this year.

OZRI is ESRI’s Australian user conference. I haven’t been to one for a while (although Tom and Akeal went last year, and blogged about it here).  It’s an ESRI specific event, but it is something I’d like to drop in on every now and then to see what’s going on. Andrew and I will be going – sparked by the realisation that the early bird registration closes tomorrow!

The TDWG (Biodiversity Information Standards) conference is something I’ve been involved with in the past, helping run the TDWG 2008 conference here in Fremantle.  I don’t think I was ever as exhausted as that event, but I’ve not made it to any other TDWG conferences simply because of the distance (2009 in Montpellier, France, 2010 in Woods Hole, USA, and 2011 is in New Orleans, USA).  We used to be more heavily involved in TDWG (we developed projects like the Biodiversity Information Projects of the World http://www.tdwg.org/biodiv-projects/ site), but in recent times there’s been less activity in TDWG and it’s dropped from our radar.  We likely won’t be heading to the US for this conference.

I went to the spatial@gov conference last year, and frankly, wasn’t really impressed.  There was no environmental stream at all (nor is there one this year, but there is a “water” one), and the quality of some of the talks wasn’t up to scratch.  I essentially went because of our nomination in the Asia Pacific Spatial Excellence Awards (where we won the award for ClimateWatch, as I blogged here).  I don’t think we’ll be going to this event this year, primarily because of the next one…

Just one day after spatial@gov starts is the Open Source Developers Conference (OSDC). The OSDC is something we’re particularly interested in for a couple of reasons; mainly that we’re hoping to participate in some form of open source developer workshop for the biological and environmental tools being developed by us and others under the auspices of the Atlas of Living Australia.  It’s likely that AJ and some of his team will head across to this conference – especially since we have quite a few clients and contacts in Canberra now!

Kehan and I went to the ESA conference last year, which was a lot of fun, and really interesting as well.  This was the conference where we sponsored the lanyards (on the left here), and I had a pretty surreal moment walking into the back of a lecture theatre to see our company name written on a thousand necks!

ESA 2010 was also one of the first events I covered using Twitter a lot, but given the ephemeral nature of tweets, they’re well and truly gone now. Nothing I seemed to do to keep these tweets has stuck around, either.  Anyway, this year the event is in Hobart, which is a great place to visit as I found out last year, and this conference is calling me back very strongly… but I do have some other obligations…

The Surveying and Spatial Sciences Conference is a new one for us to consider, and it’s in because of the APSEA award nomination I have for the Spatial Professional of the Year.  It looks like an interesting conference from my perspective because of the environmental streams I’ve seen in the draft program, and with Tom being involved on the national SSSI committee, looks like he and I might be heading across to that one.   Actually, this will be my first international conference in my career, I think (unless they’ve had really good conference dinners, and I’ve erased my memory)!

Adelaide did well to get this conference, which is an area we have been looking at for a while in our work with the Atlas of Living Australia, and other parties. I haven’t done enough research into how this would be of specific use to Gaia Resources, but the ability to identify species using their DNA as a barcode is a really interesting area for me personally.

Well this is in our backyard, and several of our team have a background in simulation and modelling.  We’re also doing more work on modelling at the moment in various projects, including one of our student projects at Curtin University, so I suspect a few of us will be rocking up to this one to at least check out the Environment and Ecology stream (http://www.mssanz.org.au/modsim2011/session_ee.html).

So, when you start to add them all up, you can see why we are having so many problems working out which conferences to go to… and especially when you look at the costs of travel, accommodation and registration – not to mention the cost to the environment! 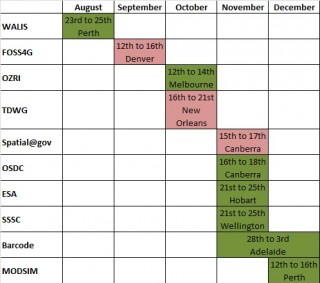 What about you? What are you heading to in the remainder of this year? Leave us a message in the comments below, or send me a message on Twitter or email.