Last week I was at the Mosquito Control Association of Australia (MCAA) conference in Tweed Heads, presenting an update on the Atlas of Environmental Health – specifically focused on the new work we are doing with the Department of Health and Human Services in Victoria. 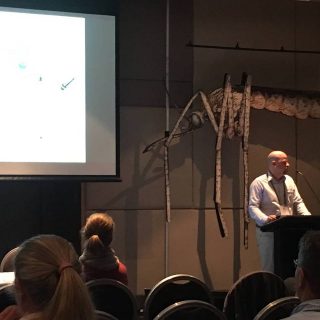 They sure do get large mossies in NSW…

I have been to quite a few of the MCAA events, starting at the 2014 conference in Mandurah where I presented on what we were planning to do with the Atlas, and then again in 2016 at Surfer’s Paradise, where I provided an update.  My attendance at this year’s one kept to my usual MCAA pattern, namely to attend a solid day of the conference to learn more about the work that people using the Atlas do, and to also do another update on the Atlas itself!

My update seemed to be well received – at least there were a few nice tweets about it (check out the #mcaa2018 hashtag for the full conference overview), and I had a few chats to people before and after my presentation.  It’s always a challenge being in the last session stream of a conference, but there was a lot to be seen on that last day – there were drone demonstrations, a range of really interesting presentations, and I think I saw a hangover or two from the dinner the night before, as well.

This year’s presentation (via Slideshare)

In my talk, I finished up with some really important success stories, and none more so than “Barry”.  “Barry” is one of the Victorian local government Environmental Health Officers, and he’s one of the people that’s making the Atlas a better piece of software, via his calls to us directly – he tells us what works, what doesn’t and what he’s having problems with – and that really helps us a lot when we’re trying to diagnose things.  We all decided when I was talking through this that we’d much rather have a “Barry” who calls frequently, with the good and the bad, than no calls at all.  So I will definitely be trying to get that #belikebarry hashtag going in the near future!

In the meantime, we’re working on a few new things with the Department of Health and Human Services, including loading a lot of historical information into the Atlas, creating linkages so that their PowerBI implementation can work directly with the data in the Atlas, and a whole new app component around ground surveillance – which is certainly the bit that interested a lot of people.  Certainly, working in this area with the Atlas has given us a whole bunch of new ways to make a positive outcome to the environment through the use of technology – something that makes the flights, driving, and all that time away from home very much worth it!

The Atlas will continue to be updated and developed over the near future so we can expect a few more updates from Chris and the team who are working on it.  In the meantime, if you’d like to know more about the Atlas, then feel free to contact me via email, or start a conversation with us via Facebook, Twitter or LinkedIn.