While James and I were at the recent Fauna Survey Workshop, there was a comment about groups doing environmental surveys needing to also assess the cumulative impact of their proposal.  I thought about this during the workshop and came back to the office to set another “challenge” to the team.

Firstly, we needed to think about how you could measure “cumulative impact”.  We thought of a few different things (such as National Pollutant Inventory reporting) and disturbance mapping data from the Mining Rehabilitation Fund (MRF) but in the end we thought that it would be best to stick to something simple for this project, and we chose to use the Native Vegetation Clearing Permits (NVCP).  There’s a nice diagram on the Department of Environmental Regulation web site showing when the NVCP permits are required, which gives you some context as to when you need to have one: 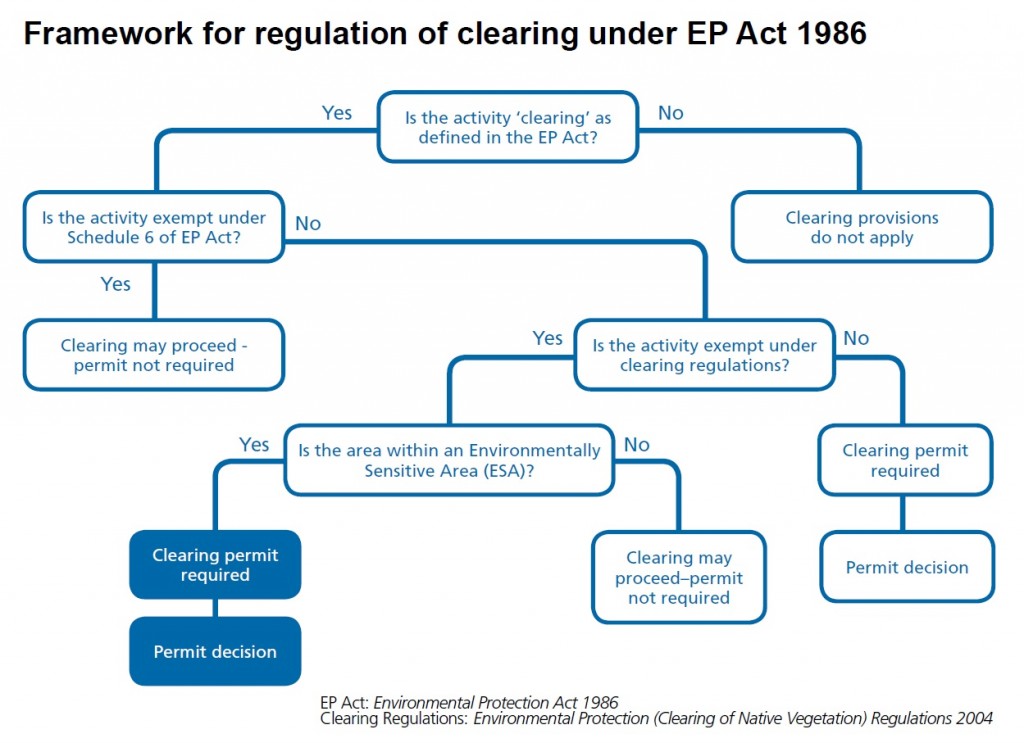 So, Tracey had the first job – to capture as much publicly available data on NVCPs as she could find – and in the end, we chose to start with the NVCP data that is available from the Department of Mines and Petroleum website (as a series of published notices).  We also found a range of data is presented in the Clearing Permit System web site, but for what we wanted to do, the PDF notices were actually easier to obtain and use.  The good thing is that there is spatial data there that could be used in the future to do this sort of thing more authoritatively!

Tracey captured data from each of the published notices, covering granted applications dating back to 09/05/2015 (including the start and end dates, mining tenement identifier, works to be carried out and hectares permitted to be cleared). This was captured in a spreadsheet, and was then linked to the DMP’s current mining tenement dataset to obtain spatial data – effectively we obtained both the polygon of the tenement and then the polygon centroid for each tenement.  All this side of the spatial analysis was done using QGIS.

Then the data was handed over to Jake to look at putting together some visualisations. The goal was to create two interactive web maps, which began with a model that ran through multiple processes. First off Jake took the tenement polygons and produced a union with both the Interim Biogeographic Regionalisation of Australia (IBRA) Bioregions (from the Department of Environment’s Discover Information Graphically (DIG) website) and the Western Australian Local Government Area (LGA) boundaries (from the Australian Government’s public datasets website).   The results were dissolved by NVCP number, summarised statistically, and calculated as percentages of their corresponding LGA and IBRA region.

The end result are two different maps, showing the cumulative impacts of NVCP to date.  The first is another of our time slider maps (which are a pretty neat way to visualise change over time).  We’re still using CartoDB (now called Carto) for this sort of visualisation while we wait for the next version of MapStory to come out (which we plan on running it through the same paces we did recently for Carto).  This map just shows a density value to show you how frequently the NVCPs are granted in areas (we could put metrics on it but this just illustrates the point).

You’ll notice the lonely 2010 data point.  This is because we could only capture data published after May 2015 using the web site, and this listed amendments to existing NVCPs as well – so this included an amendment to a NVCP originally granted in 2010 (and we use this commencement date of the NVCP for the date in the time slider).

The second map, shown below, is a more typical ‘layer’ based map.  Here, we simply show the points, the polygons of the tenements, two summary datasets (based on LGAs and IBRA regions).  For visualisation, we displayed each of the two summary datasets as a choropleth map that was quantified (using Jenks optimization method) in proportion to the total clearing in those areas, as a percentage. The darker basemap was put in place due to the complexity and size of the NVCP Polygons layer, and to make it much easier to see the results in the summary layers. Users are now able to see the majority of areas from a scaled out view of Western Australia.

So, the NVCP data shows up that up to 0.09% of any one LGA has been given approval to be cleared, or up to 0.03% of a bioregion – since May, 2015.  The actual data we tallied up is included in the attached spreadsheet we created, which is attached here.

If we had a more comprehensive dataset on NVCP (such as the one from the Clearing Permit System), going back to the start of the NCVP programme, then I think this would be a pretty useful dataset to start looking at trends and distribution.  With even this small set of data, this exercise at least proves that you can do this work – within the limitations of the fact that we only used the NVCP notices to capture information about clearing – and of course other clearing does happen out there as well, as the diagram up the top shows.

We also looked at being able to do some interactive searching using this data and the Carto plugin – addressing the initial challenge that a consultant could identify the cumulative impact in their area – but there are limitations to what we could did in a quick internal R&D project! In any case, both Tracey and Jake rose to the “challenge” I set, and proved that if you want to have some sort of measure of cumulative impact then we need to have some good data sources and ways to visualise and use this data!

We’d be keen to hear if you find this interesting or useful.  If you do, drop us an email, or have a chat with us via Facebook, Twitter or LinkedIn.