Gaia Resources has been involved in several surveys (Bush Blitz, Tiwest Night Stalk and ALA), either by supplying the software or the people.  Out of personal interest I took part in Super Tuesday the national cycle count on March 6th.  It’s when volunteers head to specific locations (they can choose from a list), wear a bright orange T-shirt and count the cyclist as they passed.  That’s a simple task – but when you are asked to record for each cyclist where they enter and leave the intersection things may get challenging.  The survey form gave me the impression that this task should be easy, but I wondered could an electronic form be used and offer any benefits.  I combined my personal interest in sustainable transport and a professional interest in field data acquisition and display.  So my question was, could technology improve the recording process?

The Super Tuesday crew are well organised and sent my survey form and instructions well in advance once I had chosen my intersection from their on-line map (tough to use on my mobile).  I duly read the instructions and reviewed the survey form. 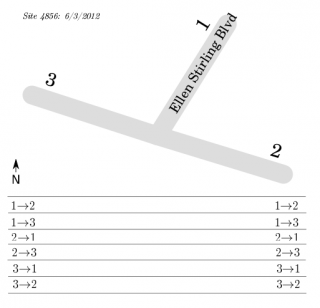 Easy!  I had weeks before the survey so I filed things away, but firstly I asked some of the Gaia Resources team what they thought of the survey form and whether they thought it could be made digital – for use on a smart phone perhaps.  We agreed that such an App could probably be developed – while the Spatial team aren’t App developers, we still could consider the usability.  I thought I’d test the App idea while doing the count.

March 6th came and I – wearing the supplied T-shirt, stood, leaned, sat in the bushes watching my intersection (thanks Google for the image) 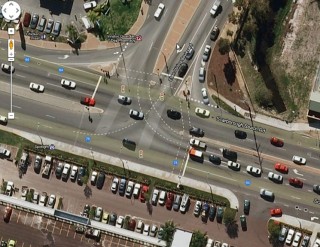 and recorded onto my full-page map the cyclists for two hours.  There weren’t many cyclists to start with so I thought I would individually number them, marking where they entered and  exited – even to the level of whether they were on the road, paths or through carparks.  That was more information than was asked for, but I kept up and recorded 38 cyclists.  I have ideas why there weren’t more cyclists, but that’s another story.

Back to my question, would an electronic App have worked?  Possibly.  By actually going to the field and taking part in the survey I learnt that there may be other information to record, or other factors to consider in the design.  I’m sure Super Tuesday have thought of this themselves but I wondered what the other intersections would be like?  More junctions, with many more cyclists?  Could an App and a device still be usable in all situations?  More testing would be required.

My story does not end there, once you have collected your data you should share it.  I logged onto the Super Tuesday site and was presented with a table to enter my results.  This confused me, I had my map with individual numbers, I would have to summarise my data into a table.  Not difficult (assuming I could read my scribble!) but a little time consuming.  This is when speaking to my father I realised that I had forgotten some of the instructions.  There were two recording pages, one-full page map and the other a page showing a smaller map and a…table.  If I had taken the table to the field I would have had less data, but an easier job supplying it.

Cycling has been in the news again over here in Perth, for speeding cyclists, and proposed cycling facilities for the CBD– Cycle Instead Bike Week is this week, March 18 – 25.

Could the cycle count have been done remotely and automatically by using feature extraction and remote sensing?  Let me know what you think: Twitter, email or leave a comment below.