Week 2: getting stocked up, unpacked and entertain the kids

Week 3: start the kids in school (thank goodness!) and work

As the timeline indicates, it is very early days here in the Gaia Resources Darwin office but in all that unpacking and getting grounded in our new home, I also really wanted to get a sense of how business works in the Northern Territory.

So I started by catching up with a few contacts I know here and attending a couple networking events in those early weeks. I used to do environmental and other spatial support activities for some major projects in Darwin, so there are some familiar and friendly faces which makes getting started just that little bit less daunting. I also know a few spatial people who call Darwin home, and am looking join (or establish) a Georabble or regular spatial meet-up event.

Everyone I’ve met has been really friendly too and quite willing to take a few minutes to welcome me and talk about life in the Top End. “How do you find the weather?” is the first question out of everyone’s mouths when they hear I’ve just moved (and they spot my Canadian accent). I’m sure that’s because we are experiencing one of the latest onsets of the monsoon season in recorded history. So initially it was humid and hot, and those two things together tend to send everyone inside into air conditioning or into a pool or just plain loopy (It’s got a name – Troppo). To be honest, I enjoy the heat and small doses of humid conditions – I’m lucky being mostly office based but I’m also not looking forward to my first power bill! 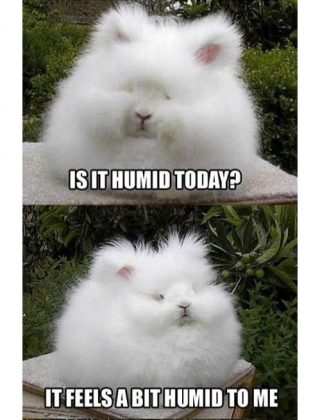 When it rains – it pours. Something I’ve learned about Darwin and surrounds really quickly is that you need to be prepared for sudden and torrential downpours. We headed out to Litchfield National Park knowing we might get rained on, but wanting to check it out. Initially we had a fantastic little swim at the Buley Rockhole but when the heavens opened the water levels rose quickly and the park Ranger came through to close down the site. We and all our gear got thoroughly drenched – queue the snickering from those who’ve spent some time up here! What a fantastic spot though within a couple hours of Darwin – we will definitely be coming back. 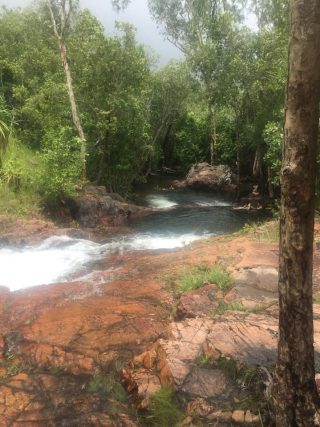 Buley Rockhole before the rains set in and the water levels rose dramatically.

So, like the creeks of Litchfield, I hope that the opportunities for Gaia Resources flow quickly, but I know that is not really how it works in a new setup. For now I have just been getting out there to networking events like the NT Energy Club and looking to meet with some interesting people in the environment, health and collections space. It is also about spotting connections with similar projects and people we’ve worked with in Western Australia, Queensland and across the country.  It was great to catch up with Rohan Fisher over at the Charles Darwin University- whose talk I saw at FOSS4G (see link to a blog on that conference) on spatial capacity building in Indonesia local councils – and to see his 3D printed topo models in action. Also nice to reconnect with Tom Lynch, a spatial software developer who made the move from Perth several months before me. In one sense the ‘rain turns into rivers’ metaphor fits, since those coffees and conversations add up to something bigger – and I’m looking forward to seeing how it all connects and flows.

I can already see that resource companies (oil and gas, mining) and the NT government play critical roles in progressing major projects and keeping the Territory’s economy and employment opportunities at a healthy level. Recently though, a major project has stepped down its staff and contractors as its processing facility moved into Operations mode, and the NT government is facing some challenging financial times ahead (see news article from December).  The feeling amongst those I talk to is that there are other major project opportunities in the making. The Territory’s first lithium mining lease has recently been approved (see news link) which bodes well for a strong foothold the renewable energy sector, and onshore gas is a major topic here with a lot of interest. I’m anticipating natural resource management groups and aboriginal corporations are also key components at the heart of the Territory’s health and sustainability – and so if you are in that space I’d love to start up a conversation.

In general, if you’d like to know more about what Gaia Resources is doing in the Northern Territory or want to talk about your own experience in the NT, hit up our Facebook, Twitter or LinkedIn accounts – or drop me a line on chris.roach@gaiaresources.com.au.