We recently participated in the Testing Within Government (TWiG) program as part of the Queensland Government’s Advance Queensland innovation program. This ran from June – September, and we collaborated with the Queensland State Archives to produce a public Proof-of-Concept called “Discovering Queensland”. Piers recently wrote his own blog about attending the presentation, and I also introduced the project back in August as we were in the final stages of development. But in this post, I’m going to reflect on how that project came together over the 12-week development process.

The brief was bringing the archival collection to life. Easily said, but the barrier to entry to explore archival series and the like for non-archivists is fairly high. And another part of the brief was to enable a platform that allowed contributions from the community. Easily said, but we wanted to do something a bit more dynamic then allowing comments and social sharing.

The TWiG program also brought with it a structure to develop our product – that is 6 x 2 week sprints, with a public release at the end of each sprint. This meant lots of rapid development, and being comfortable releasing something that is not always finished with engagement and participation from the community.

This rapid release and engaging the community to feedback and help shape development is a cornerstone of Agile development, but something is a bit new to many GLAM (Galleries, Libraries, Archives and Museums) institutions – Agile development and software creation might be common, but releasing two-week old prototypes is something new entirely.

But it proved to be the projects greatest strength. It meant that we got feedback on decisions almost immediately, and it showed that you can still deliver evolving projects early (rather than completely finished projects) as long as you take the community with you.

The cornerstone of the project, was the “Now and then” concept, which came out of the first sprint, and was validated quickly with user research. Essentially, it allows photographs to be organised into time, space and categorised, and then the location of the image draw upon the Google Streetview API so that you can see a modern view of that image. 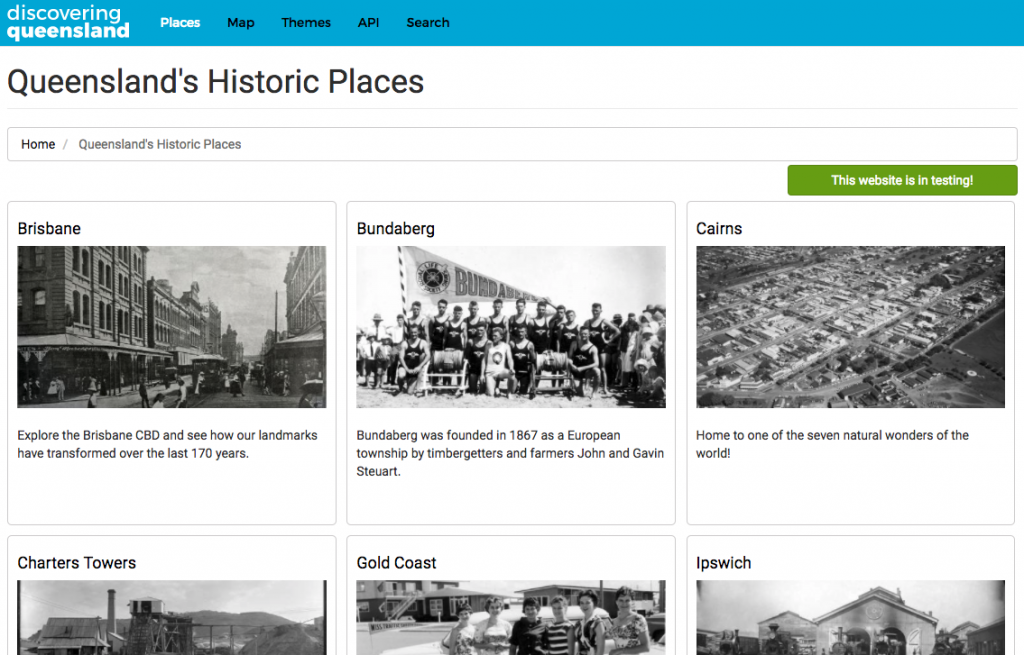 How this bring archives to life is that it becomes the entry point to the government and archives – viewing the photo acts as an anchor to related links in archives and series. Rather than knowing the collection and the terminology, you explore and then find what’s interesting (e.g. colonial buildings in early Queensland history, creation of Southbank, bridge development, regional change etc).

We also saw this as a platform that in future iterations could engage the community. Rather than ask for comments and stories, we ask for the community groups to become publishers – they use their own archival photo collections to complement the State Archive’s stories and collections, and the Archive’s collection becomes the anchor for this work.  The proof-of-concept was delivered and validated, so we’re now in negotiations about taking this further which we hope to report on in the very near future.

In the meantime, I’ve taken a static snapshot of the site, which you can explore using the map below:

Some of the functionality has been turned off for now (e.g. the feedback form, search, background images for the timelines) as this is a static, archival snapshot of the project; the site would be migrated into a new platform for any future stages.

Feel free to have a look around!

Also, if you’d like to watch our succinct 7 minute presentation that we gave at the TWiG showcase back in late September, the presentation is available on the YouTube video below (skip forward to 1 hr, 4 mins, 38 secs for our part (1:04:38))

Posted in Blog | Tagged: archives, collections, Drupal, spatial
« Mapping our History – and our Future
How healthy is your GIS environment? »