Today I attended a workshop entitled “Futures Workshop – Engaging the Community in Plant Biosecurity”, run by the Australian Bureau of Agricultural and Resource Economics and Science. I was invited in my role as the Team Lead for Citizen Science at the Atlas of Living Australia.

In the leadup to the event, I read through a bunch of information about the workshop in preparation, but I didn’t quite gather what the workshop was going to be like.  It wasn’t quite what I expected! 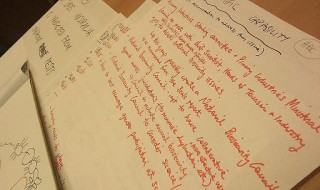 The workshop basically worked through community engagement in the plant biosecurity arena, starting from groups working to create a vision statement.  As the day went on the groups moved around the room and worked from the broader vision statement right down to detailed action lists as to how to achieve these visions, using each others previous work.  One of the big things I will take away from this is about how to better move from a vision to a series of actions, which will be of use in our planning at Gaia Resources as well.

I learned a few interesting things about the biosecurity industry and the players in it, and also I got a really strong impression that the players in the room were very much scientists.  We did a lot of work, thanks to the facilitator Marcus Barber, on getting these scientists to think in the shoes of the community that they struggle to interact with.  Our work with the ALA on the Biological Data Recording System got a few mentions – some of the biosecurity people and projects are interested in using this to help get the public involved, so we’ll see where this will take us.

This tied in to my current thinking about a project we’ve been working on with South Coast NRM Inc, on a dieback information system.  Which is really handy, because tomorrow I am facilitating a workshop about our requirements analysis part of that project!  While it won’t be as focused on agricultural biosecurity as today, it will be related to biosecurity – as a threat to the biosecurity of many of the ecosystems I know quite well from growing up down in the south-west of Western Australia.

Coincidentally, right at the start of the day I was also Tweeting across the country to Jim Croft (and a few other people) about a workshop being held in Canberra about Myrtle Rust.  Seems that it’s the topic of the week!

Back to the ABARES workshop – I was very impressed with the way that this workshop was run, and I’m going to be interested to see how this goes into helping create a direction for community engagement in biosecurity here in Australia.