We are very proud to have launched the new version of the Dolphin Watch app this week!  You can see more about the new version in the video that we produced (with a great voiceover by Marnie from River Guardians)!

We’ve taken a range of feedback from the volunteers into consideration with the new design, and included some new features that will make the app more user-friendly and accessible.  Given the success of the original DolphinWatch app, we wanted to keep the design and functionality very similar. A few volunteers mentioned that the light blue text could be difficult to see in full sunlight, so we enhanced the interface with darker text, larger font and an overall cleaner design.

The new screens for the new version

Previously, the location of a record was calculated using the GPS coordinates of the volunteers current location. We have kept this functionality but have introduced a new ‘Map Mover’ feature (which we first tested in PrawnWatch), which allows volunteers to shift the location of a record with a simple touch-and-drag motion. This feature will allow volunteers to more accurately report sightings, and will hopefully reduce the number of ‘land dolphins’ recorded!

The main purpose of the DolphinWatch app is to undertake “timed surveys”, where trained volunteers record their time spent monitoring for dolphins, making records of any dolphins that are observed, or providing absence data (there’s a certain #nodolphin tag heavily in use by one person in our office…). Previously, volunteers had to be within the zones that were set around Perth’s Swan River to initiate the survey function, but with DolphinWatch 2.0, you have the ability to perform surveys anywhere (although only those within the Swan River will count towards the River Guardians surveys).

Another new component added to surveys is the option to fill out details about a dolphin straight away, or create “stub” records to fill in later – the latter being ideal for volunteers who are performing surveys on the move.  This was one of the most requested features by volunteers, who often survey the river in kayaks, or along the banks on their bicycles. While we wouldn’t encourage you to use your phone and ride your bike at the same time, it means you can pull over and make a quick record before getting back on your bike. 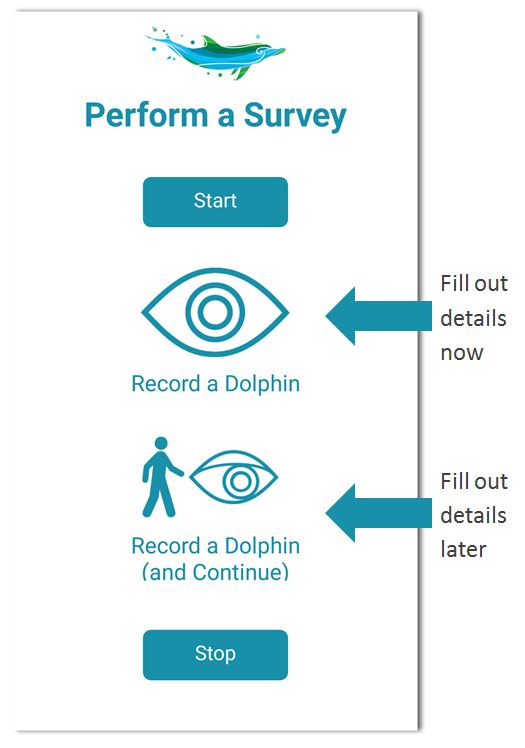 We believe these new features will greatly enhance the user-friendliness, accuracy and scope of utilisation of the app.  We’re also talking to the volunteers regularly through our support process, and we are already tweaking the app to make sure that it works well on as many combinations of operating system and device as possible (which is one of the headaches of any mobile project). One of the strengths of the River Guardians project is this strong engagement – a real key to any citizen science project.

This app uses our new mobile and web based toolkit for citizen science, which we have internally called Project Hydra.  The aim of the Project Hydra toolkit is to enable us to be able to fulfill a range of needs (hence the reference to the multi-headed beast) and we are looking to produce several more of these “next generation” apps using this toolkit in the coming months.  We’ll produce more blogs on these as they are released.

If you have any questions about Dolphin Watch, or our services in building citizen science apps, feel free to drop us a line, or start a conversation with us via Facebook, Twitter or LinkedIn. And if you have any problems with the app, please let us know!