On Tuesday night Alex, Gary and Tracey attended a Dolphin Watch app training session on the South Perth foreshore, run by Marnie, Rachel and Jason from Department of Parks and Wildlife. Despite the chilly weather there was an excellent turnout of volunteers.  No dolphins were spotted apart from the plush one on our picnic table (despite Piers not being there, who is a well-known jinx for sightings), but the view was spectacular. An amber sunset followed by city lights shimmering off the river made the cold weather worth every minute. 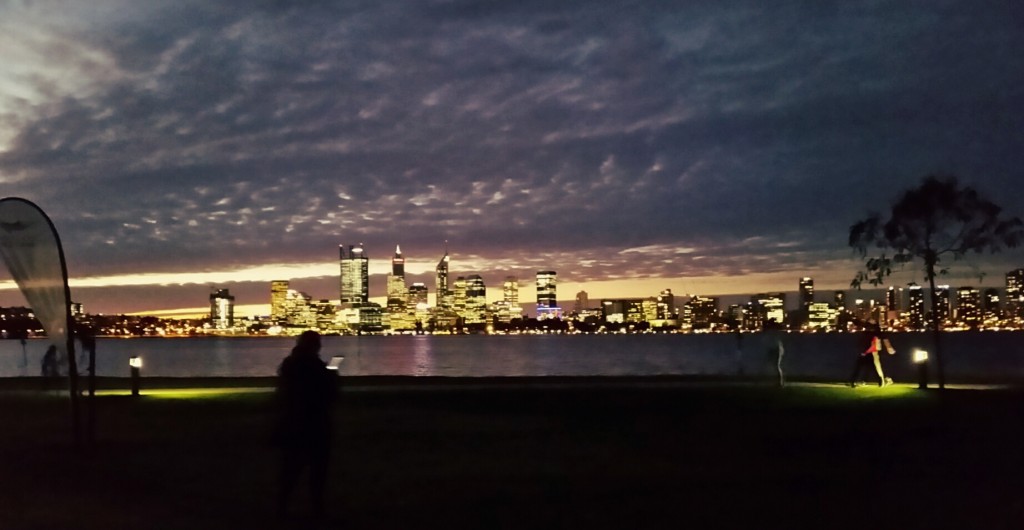 It was a very picturesque setting for the training!

We began the session by addressing any issues – assisting in initial registration, correcting forgotten login details and updating the app on people’s phone – as well as getting to know the volunteers. It was lovely to put a face to the names behind the vast amounts of data and photographs that get submitted, as well as to  share ideas. Despite coming from different walks of life there was a clear passion common across the volunteers for protecting the wildlife, maintaining the health of the waterways and keeping the parks and amenities clean.

In between mastering the Dolphin Watch app everyone collected a rubbish bag and a grabbing stick and began cleaning up the foreshore. Despite ample rubbish bins about there was a disappointing amount of litter, particularly cigarette butts and filters. But it wasn’t all bad – a passing jogger managed to gasp in enough oxygen to thank people, and we found a 20 cent coin!

Smart phones have opened up a world of data input to extremely valuable members of the public, and once the less confident volunteers were shown how to use the Dolphin Watch app you could see the immediate increase in enthusiasm. One member even commented, “Who knew I’d enjoy a smart phone as much as my grand children?”