I recently attended the launch of the latest chapter in the growth of the Dolphin Watch program — the first training session for Dolphin Watch Mandurah citizen scientists.

MC Jason Menzies (Manager of the Volunteers and Community Unit in the  Parks and Wildlife Service) opened the night and introduced the many expert speakers to the stage.

Later in the evening, he described the main uses of the Dolphin Watch smartphone app in observing and surveying dolphins, the latter requiring the specific training delivered on the night.

The observations and surveys reported by Dolphin Watch volunteers are collated into five distinct zones of use (by both humans and dolphins): 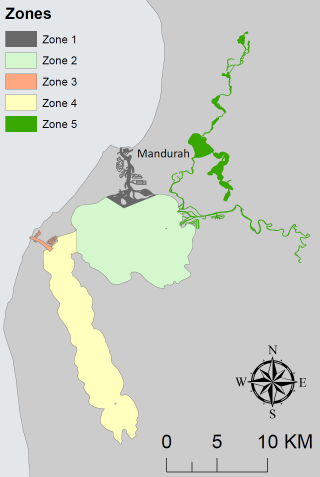 Dr Steve Fisher (Peel-Harvey Catchment Council) introduced the audience to the Ramsar-listed wetlands that are ecologically diverse and yet stressed by “the Super years” of phosphate application and run-off and challenged by increasing land-use needs. He also discussed some of the findings from the recent ARC Linkage project – ‘Balancing estuarine and societal health in a changing environment’.

Drs Krista Nicholson, Delphine Chabanne (Murdoch U) and Sarah Marley (Curtin U) detailed the biology of the Indo-pacific Bottlenose Dolphin, their adaptations and behaviours, and the many conservation issues for dolphins in the estuary.

Dr Nicholson, who leads the Mandurah Dolphin Research project, gave some impressive statistics about the dolphin population. In the last 2 years, there were 1038 dolphin sightings of around 500 identified dolphins. The estuary currently supports a stable population of 83 dolphins.

Cameron Hegedus, one of the many citizen scientists at John Tonkin College and a member of the Estuary Guardians launched the second edition of the Fin Book Mandurah – an identification catalogue for dolphins observed in the Peel-Harvey Estuary.

I can highly recommend this recent Today Tonight segment, where you can hear a number of these scientists elaborate on the Mandurah Dolphin Watch initiative.

If you’d like to know more about how we can help you with developing a citizen science program, or how a smartphone app could improve your community engagement and scientific data capture, then please leave a comment below – or email me directly via alex.chapman@gaiaresources.com.au.