This is the third blog in a series about mole crickets.  You can find the first two here and here.

After my last blog post, on the 13th of June, I decided to move to the next step of my experiment with Mole Crickets and Twitter, and of course I couldn’t really say anything about it without spoiling it, as you’ll see.  What I wanted to test is how much engagement makes a difference to citizen science.

To that end, I stopped tweeting and posting on facebook about mole crickets, to see what would happen to the volume of records we were receiving.

The results are pretty marked.  We got 5 records in the next month (blue in the graph above), compared to the 49 we received in the month beforehand.  The red lines indicate my social media engagement (Tweets which also appeared in my Facebook profile).

There is a bit of a complication here, though – although I stopped tweeting and recording mole crickets myself, I kept an eye out and an ear out for them.  I have to admit to hearing a few of them and not recording them, but I did note that there were a lot fewer calls generally speaking (and oh how I wish I was recording them).  It really did seem that on the cusp of winter, these critters are active, then they seem to shut up shop for winter.

Anyway, back to the engagement part.

What I have been saying to clients who use citizen science is that they have to have an engagement strategy or they won’t get the records they are after.  If your citizen science project also uses social media, then you have to be prepared to have conversations with people.

Some of my personal highlights from these conversations have been: 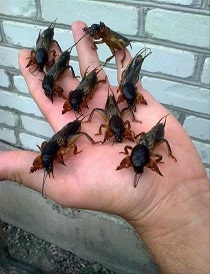 Original photo from Facebook (which I find hard to credit, so here’s a link)

My all-time favourite was last Sunday.  While we were our on our usual run in Kings Park, my good friend Gemma says, “I think I have just seen a mole cricket up ahead!” after she had doubled back to me.  And she was right – she managed to identify a mole cricket as she was running (at a pretty decent clip, too).

My realisation was that the effort I put in to engage with people was working.  We were getting records in of these cryptic critters, and I was actually seeing people getting interested in them in their daily lives.  The engagement we put in a month ago was still having an effect, in that people still remembered the messages we were putting out.

I’ll be talking about this survey and citizen science with Science Network WA in the near future to elaborate on this.  Now, back to looking for well hidden holes in my garden while I’m being deafened… and with the help of people willing to submit a tweet now and then, we should be able to work out the extent and distribution of mole crickets in Perth.

I’ll take the opportunity to thank the people that have been sending in sightings, even though I’ve been stonily silent for the past month on this!