This year we again sponsored the ESA (Ecological Society of Australia) Annual Conference and I got to go along to support the mobile apps that we wrote as part of our sponsorship. Like the last conference that Piers and I attended a couple of years ago this was again an awe inspiring conference, although the community seems to have taken several technological leaps forward. Two years ago Piers and I were pretty much the only people tweeting at the conference but last week there were over 540 tweets from at least 95 twitter users using the hashtag #ESAus2012. One of the presenters even tweeted his talk at the same time as he was presenting it, although the ephemeral nature of Twitter seems to have swallowed that up. I have archived the tweets from the conference if anybody is interested.

Ian Lunt, the opening keynote presenter for the conference seems to have wrapped it up pretty well on his blog but I have several personal take home messages that I developed throughout the week. I took copious notes of varying degrees of quality in all of the talks that I went to, experimenting with Evernote on my Android phone before finally reverting to the reliable company eeepc – there’s something reassuring about having a keyboard that you don’t have to look at while you’re typing. Ian Lunt’s keynote seemed to actually set the theme for the whole conference: we have to always be aware that the work we’re doing needs a full context.

The second keynote from Emma Johnston on stress ecology was a bit of an eye opener in terms of the impact that humanity is having on the planet  – there are few if any locations on Earth where there is no pressure from anthropogenic chemicals! Damaging levels of herbicides floating around the Great Barrier Reef – and we wonder why coral reefs are disappearing? Refreshingly though her lab seems to be getting in on ecosystem level ‘omics which really is a leap forward for ecology – in a past life I did some work looking at something called the ‘Interactome’ which is essentially a network model of how organisms function from the ground up and I remember thinking – I wish we could  do this for whole ecological communities – pipe dreams do pay off in the end I guess.

Anyway I’m not going to recap the full conference, as there are abstracts online on the site that we built to support the mobile app and host the data. Plus I have a list of all of the talks I attended as a byproduct of selecting them in the session planner for our mobile app.

The poster sessions were both very successful due to the ingenious idea of giving the presenters an almost godlike power: they could give out free drink tokens to people who asked sufficiently intelligent questions. Some other nice features about the conference were that the catering was all vegetarian and there was barista coffee sponsored by the Centre for Integrative Ecology.

Conference Mobile App – How did it hold out

One of the objectives of me being at the conference was to act as ‘on the ground support’ should the mobile app not work for somebody. To my amazement pretty much all of the feedback that I got from everybody that I accosted was that the app was working well. It was nice to hear the conference logistics staff saying that a number of people had turned down the 1kg tome that was the conference proceedings as they ‘already have the App for that’ – maybe this means that next year far fewer pages will be printed out. We did find a few bugs and those have all been documented so that when we do this again the app will be fixed (anybody on an iPhone notice that you couldn’t scroll to the bottom of the abstract without it bouncing back?). Once nice feature of having a Drupal backend for the mobile app was that I could change some features of the app during the conference: 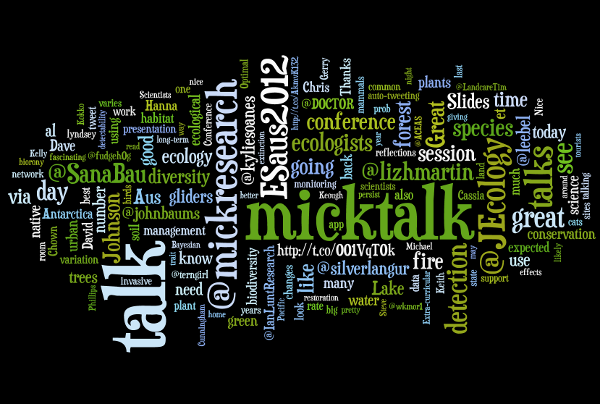 Towards the end of the week there was even a tag team talk by two Melburnian professors who seemed to only be able to agree on one thing – they both hate Essendon. Actually a good fun rant on Popperian Hypotheses vs Bayesian Poterior Probablity, and even included the great quote: “ecologists use statistics like a drunken man uses lamp posts–for support rather than illumination“. My final great revelation of the week was the fact that “Sugargliders are Jerks” according to Dejan Sojanovic who has been studying the demise of the swift parrot (Lathamus discolor). He won last year’s Jill Landsberg scholarship which is given out by the ESA and he came to present the results of his research. These cute parrots breed in tree hollows in Tasmania. With the help of remote cameras he managed to catch the gliders in the act of eating helpless chicks. An apparently Sugargliders were introduced into Tasmania just under a century ago from mainland Australia.

So all in all a great academic conference that benefitted from professional organisation and conference hosting. I’d just like to finish off with a request to our readers / the people who used the mobile app at the conference: 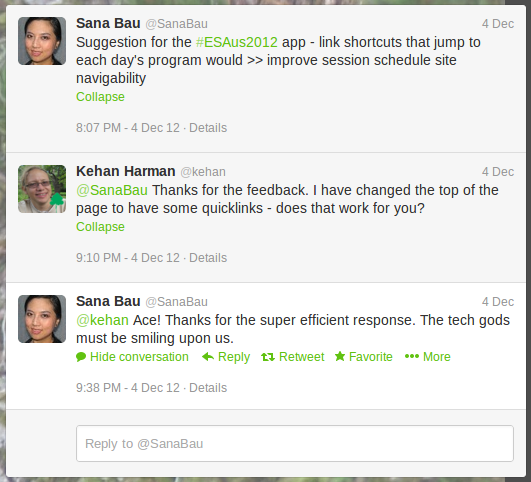 Does you have any suggestions as to how we could further develop the conference application and associated website? Twitter integration? Voting on talks? Uploads of slides? Lolcats?