Late last year Tracey and I headed to Victoria as the last part of an intensive project to get the Victorian implementation of the Medical Entomology module of the Atlas of Environmental Health rolled out to a range of Local Governments.

We’ve blogged previously about the Atlas of Environmental Health – such as this blog – and this expansion to include other States has been something we have been working towards for a while, with presentations at a couple of conferences like the Mosquito Control Association of Australia, and the CRCSI Conference (that summary presentation is below).  A consolidated national view of mosquito populations, disease outbreaks and control methods across the country is one of the goals we have for the Atlas, so it was great to have Victoria on board with the project.

An update on the Atlas that I gave last year

From late November, we started undertaking some development of the Atlas to support the ability to have Victoria come on board, by adding in State level permissions, a few other tweaks relating to that, and then importing a year’s worth of trapping data from the Department’s lab.  Once that was done, we were ready to head east, and Tracey and I flew across to run training sessions in Swan Hill and Shepparton.  It’s always a bit nerve wracking running training, so we did a fair bit to prepare for the trip.  After a late flight into Melbourne and a good night’s sleep (sort of), we met up with Rebecca Feldman from the Department of Health and Human Services and got on the road to Swan Hill.  I have to say, the Bridgewater Bakehouse makes a fantastic sausage roll!

We undertook the first lot of training at Swan Hill which went well – in a great old building, the Town Hall.  We helped the Environmental Health officers get set up with the mobile app component, which is where they will use the system the most – collecting data on their mosquito traps and dips in the field.  We also gave them a relatively quick run-through of the web side of things, which they’ve been using to do some data QA and to also produce some reports on their areas.  That arvo we drove down to Shepparton and crashed overnight – that first day was a long day of driving, and training is quite exhausting as well – and then we ran a much smaller, but similarly structured, training session in Shepparton before hitting the road back to Melbourne.

We wrapped up the trip with a final session with the Departmental Regional Environmental Officers in the city, where we gave a quick run through again of the system, and explained to this team how they could get their Local Governments set up with the system, and what they needed to be aware of in terms of that setup.  We also had the lab team there who were able to see how they can log in, find the records that correspond with samples that they are sent, and update the species identification components of the trapping data. 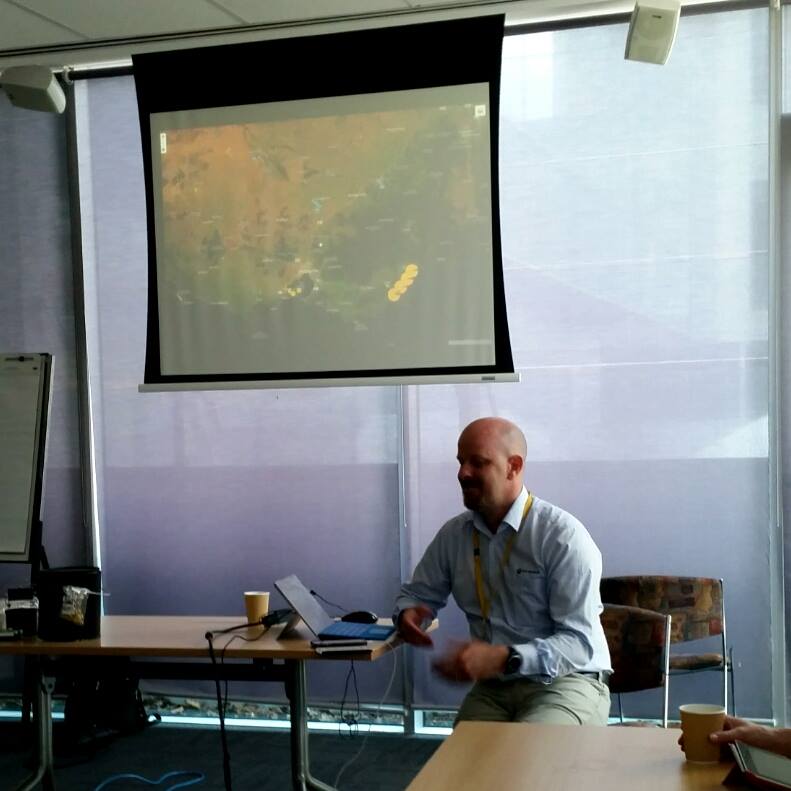 Running training in the system in Melbourne

One of the best things about this trip was meeting a bunch of the on-ground staff for the training.  I always think that meeting the end users to discuss their workflows is critical to success – we’ve been doing the same thing for our citizen science programs for some time.  They explained to us how they work – and that’s quite similar to what we expected – but it was great to get confirmation we were delivering useful tools for them.  You can’t underestimate the value in talking directly to the people that are actually using your system!

Since the rollout the Victorians have quickly become ready and prolific users of the system.  The uptake in 2017 looks like we’ll overtake our previous annual data volumes in the first three months of the year!  Meanwhile, Tracey has been handling any of the support requests really well under our new support processes, put in place by James.

We’re also now planning to work with the Departmental staff to roll the system out to a range of additional Local Governments, and I did a quick trip back to Victoria a few weeks ago to get that set up.  In addition, in the coming months we’re going to add in our first treatment system components for the Medical Entomology module, as the Victorian department invests further in the system to get additional functionality implemented.  We’ll post more blogs on that, and a few other directions that we’re moving in with the Atlas, in due course.

In the meantime, we’ll be working hard on delivering additional functionality through the Victorian investments, loading additional historical data into the system, and we’ll be heading back to Victoria to do some more training and rollouts.  In the meantime, keep an eye out for us via our Facebook, Twitter or LinkedIn pages, or drop me an email.