Back in January, we started talking to the Great Victorian Desert Biodiversity Trust (GVDBT) about a project that would identify survey sites aimed at learning more about the threatened species – Leipoa ocellata, or Malleefowl, commonly also known as ‘Nganamara’  –  in the Western Australian half of the Great Victorian Desert. Now that we are almost finished our part in this project, it is a good chance to reflect on our findings so far. 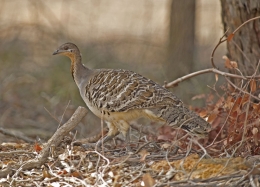 Citing Wikipedia, “the Malleefowl is a stocky ground-dwelling Australian bird about the size of a domestic chicken. They are notable for the large nesting mounds constructed by the males and lack of parental care after the chicks hatch.”

In the Western Australian  wheatbelt, populations are now considered to be highly isolated and fragmented, and continue to be threatened by habitat clearing, competition for food with introduced herbivores, predation by foxes and cats, and increased frequency of wildfires and prescribed burning (Source: Benshemesh, 2007, DPAW, 2016)  Not much is known about Malleefowl presence and habitat in the massive Great Victorian Desert; which, as the largest of Australia’s deserts, equally spans Western Australia and South Australia. Similar threats impact the Malleefowl in the Great Victoria Desert (GVD), with wildfires considered as the biggest threat in this sparsely populated part of the State. 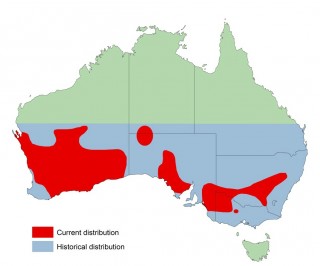 There are direct and indirect sightings of the bird primarily in the Southwest corner of the GVD, recorded by mining companies and consultants, with data stored in a centralised database (NatureMap) managed by the Department of Parks and Wildlife. These sites tend to centre around mines and nearby tenements. Elsewhere records are sparse and isolated across the GVD expanse. Did I mention how big the Great Victorian Desert is? The map below only shows half of it (the other half being in South Australia)! 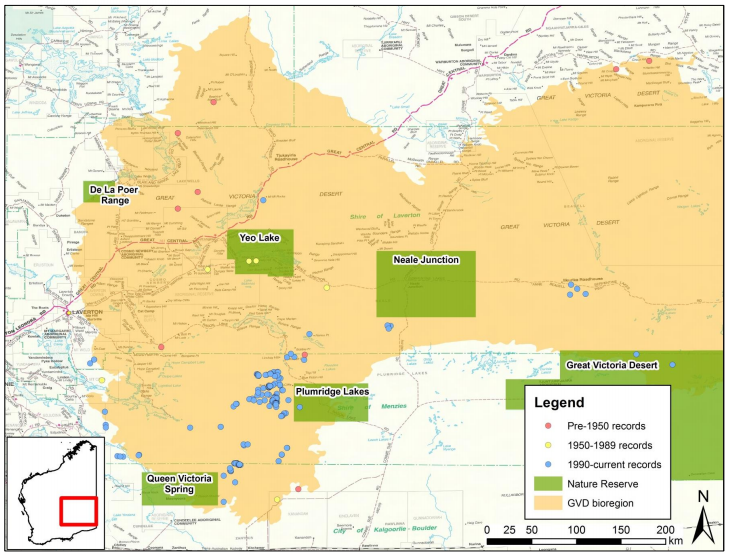 Malleefowl locations are located primarily in the Southwest portion of the GVD (Source: Malleefowl in the GVD Report (DPAW, 2016)).

I worked with our GIS Analyst Jake Geddes to source and analyse  a set of mapping layers – including Beard’s Vegetation Complexes, Fire Scars, Landsat Satellite imagery, roads and tracks. The first challenge was to define ‘likely Malleefowl habitat’ – and through discussions and a workshop with key stakeholders in the Malleefowl conservation arena, we were able to massage the mapping layers into a suitability map book containing areas of High, Moderate and Low suitability. We started with categorising Vegetation complexes containing the right vegetation assemblages, then subtracted areas of recent wildfire burns (e.g. in the last 10 years). The resulting areas were still very broad, but Landsat imagery helped to focus in on smaller patches of dark vegetation we interpreted to be candidates for the dense Mulga stands that Malleefowl like to call home.

Our interpretation was backed up – at least in the Southwest corner of the GVD – by a strong correlation (e.g. proximity to) known Malleefowl mounds. We also brought some on-ground experience to bear, by getting the fauna consultant (Jeff Turpin) – who recorded some of those mound locations – to corroborate our findings. 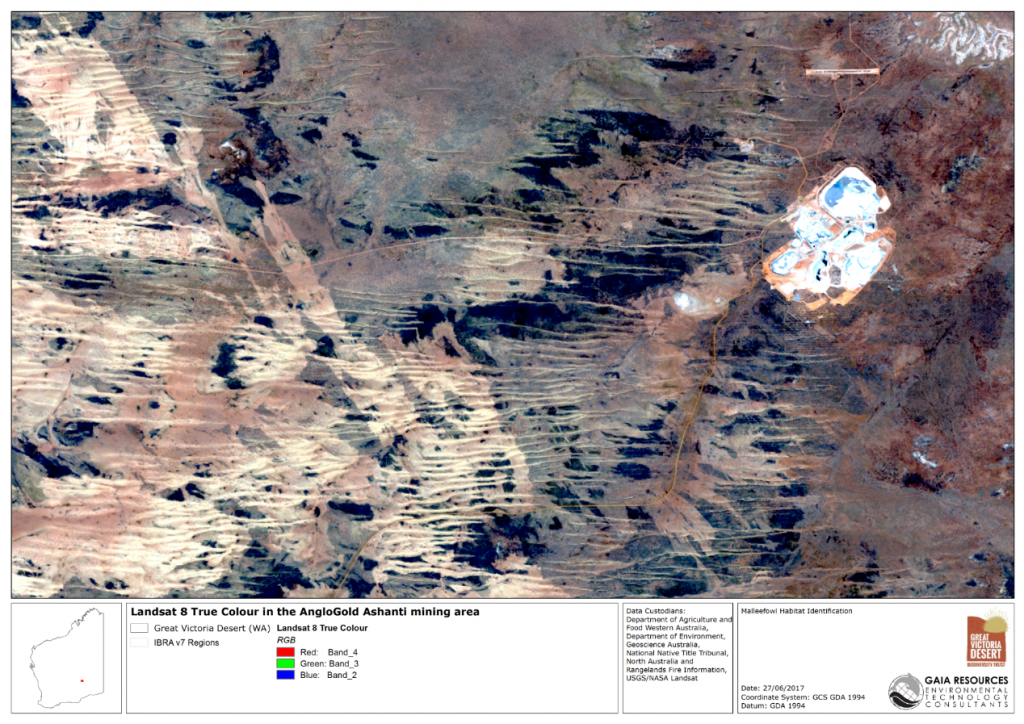 Landsat 8 imagery near the Tropicana mine. The dark patches are interpreted as high likelihood Malleefowl habitat.

The second challenge was to take the thousands of candidate areas, and nominate a smaller set of potential survey locations. The GVDBT want these survey sites to be accessible and evenly distributed (geographically), including across a range of categories and land use types (e.g. parks and reserves, mining tenements, pastoral leases, native title boundaries). This is so we can learn more about the bird’s habitat across a range of environmental and land use criteria. To do this we have ignored very small patches of suitable habitat. We then identified the sealed and unsealed roads that surveyors could travel on to get to the remaining potential sites. This is where we ran into a bit of a hitch; we know there are many roads through the GVD, but little data is readily available. So we have used the best publicly available roads dataset from Geoscience Australia. Taking into account survey methods that consist of short walks from these roads, we have excluded areas that are more than a few kilometres trek from the beaten path.

Our site selection process includes 100 randomly selected and stratified sites with representation of known Malleefowl mounds, high, moderate and low (inferred) suitability. The 100 sites are spread out across the GVD so we have good geographic representation, and includes a good scattering of sites in different land use types. To choose the sites we facilitated two workshops with stakeholders – the first focused on the technical methodology for site selection, and the second was a review of the selected sites. 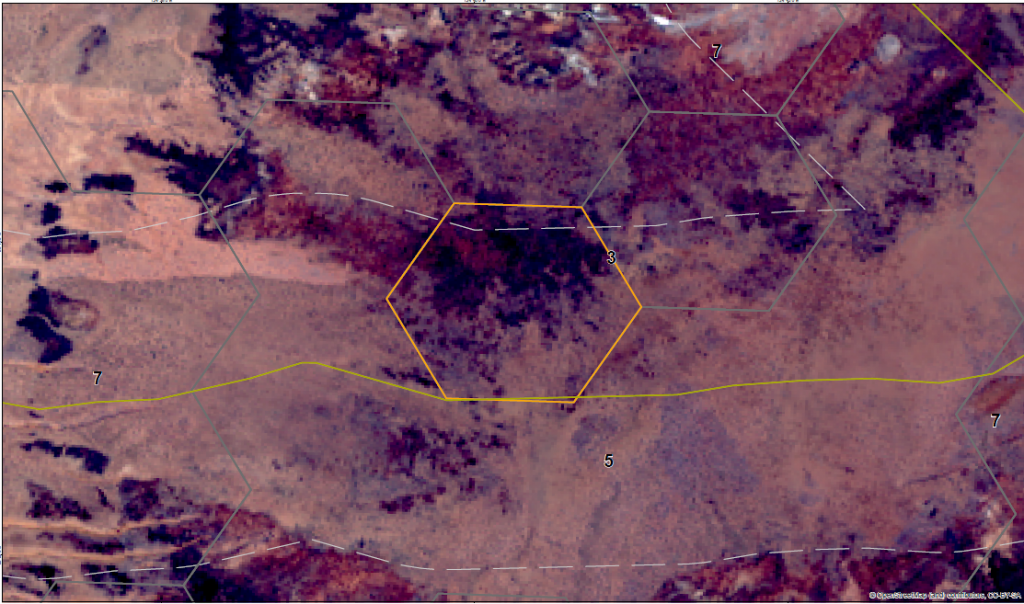 Example of a site selection based on a hexagonal survey area within buffer of accessible roads data, and high suitability of habitat based on Landsat imagery.

So the long and short of it is, we had our work cut out for us, but this has been a fascinating project. Our hope is that with all this data crunching and science, we can add value to the more important survey effort and through this can contribute to the collective knowledge of Malleefowl habitat in the GVD.

This was a great project that featured a range of spatial analysis, and if you’d like to find out how we can help you with similar projects, contact me directly in the Perth office on (08) 92277309, email or Facebook, Twitter or LinkedIn.