We went out again today for a third field test of the mobile components of the Biological Data Recording System (BDRS) Citizen Science software we’re building for the Atlas of Living Australia.  You can see our two blog articles on the previous testing here (the first) and here (the second).

Since the last testing, a lot of development work has gone into the BDRS both on the mobile side and the server side.  In the meanwhile, the team here have loaded in my own personal birding records from my own database, adding in just over 7,500 records over the last ten years, so we have got a reasonable dataset to test against.

Before we hit the road, we downloaded the software to a range of devices.  The devices we used for testing included: 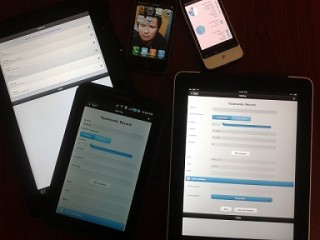 It was great to see that we could, after a few hiccups, load the software to all of these devices (picture on the left).  Of course, everyone has their own favourite and we all noted different things about these devices.  We’re planning on a mobile device review in the near future, so we’ll post some information about this in another article later.  Personally, I used my Iconia (which I really like), and it worked really well.

AJ then ran a little briefing in how to use the tool (as it’s quite different than the last version we tested), and I did another run through of what I would be recording (as usual, we were doing a bird survey, but this will change in the near future), and off we went to Lake Monger to record some birds.

My own previous development work with mobile data entry tools (confined to Windows mobile) was a difficult experience. My actual survey methodology (record the details for one site, then just create a list for that site) worked OK, but I always had this niggly feeling that I should really be recording the location of every single sighting, and occasionally I broke out OziExplorer and a GPS enabled camera to get that trying to work.  It all was a bit too hard.

In this version of the software, it’s easy to record that level of detail.  So, as we walked and I talked a bit about birds and how to identify them (I might have gotten a bit carried away occasionally), I was typing the first few letters of species names into the autocompleting species list (common or scientific names!) and just entering the number of individuals, and pressing a “GPS Location” button to record where I was – including GPS accuracy.  I was really pleased to see how easy this was to record each individual sighting, especially when you’re standing looking at a range of birds flying around and doing what they do.  I’m actually really looking forward to getting out and doing some birding over the weekend to test it out some more.

There were a few different things we thought we should change, or just didn’t work in practice, but during the testing we saw one fatal crash on the iPad (no loss of data, though), and my Iconia hung up once – but I backed out and back to the form and carried on without a crash or loss of data.  I did have a few problems with the Iconia turning off the GPS and not telling me – there’s probably some setting in Android I dont know about for that.

On the way back we stopped off at our current favourite Leederville lunch place (Burger Bistro) and while we waited for the burgers to come for us to bring back to the office, we workshopped the issues we’d had with the devices.  There was only a couple of what I’d really call issues, the rest were about streamlining for this particular survey, some ideas, some gripes about devices and general discussion about how much this has changed in the last couple of months.

When we got back and were woofing down our lunch, we turned the wifi on our devices on and sat back and watched as the records from the different mobile devices loaded up into the server we have running (without doing anything else on our end).  The results when shown on a map were pretty exciting.  The map below shows our sightings, with a red dotted line being my two-second attempt in Paint to show where we walked (click on the image for a larger version). 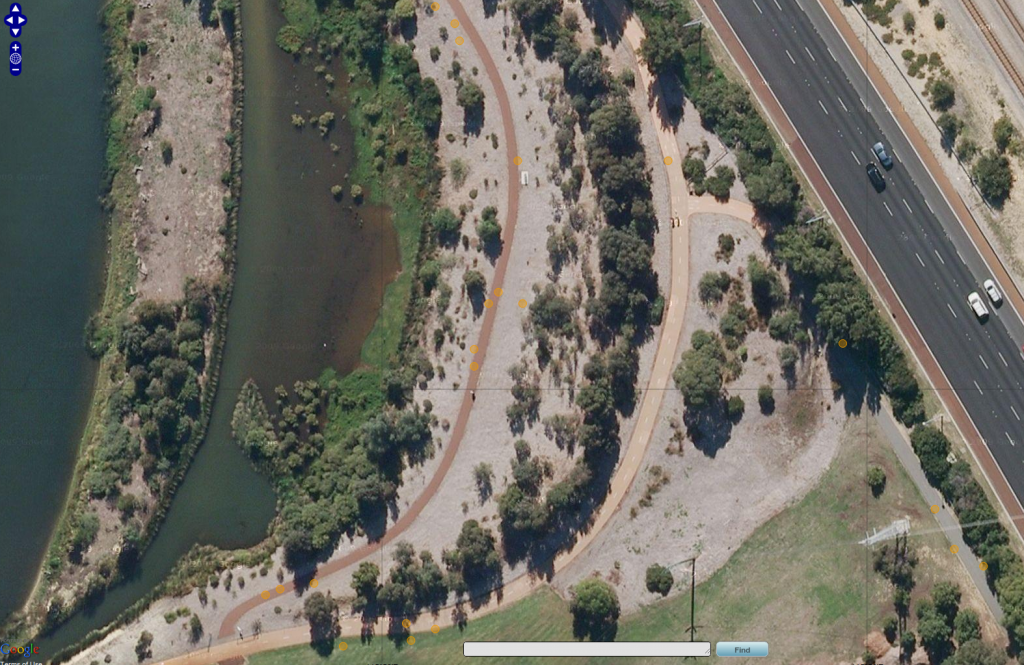 When we got to the hide that isn’t pictured just to the north of that screenshot, we took a range of sightings from that location as well.  These are shown below. 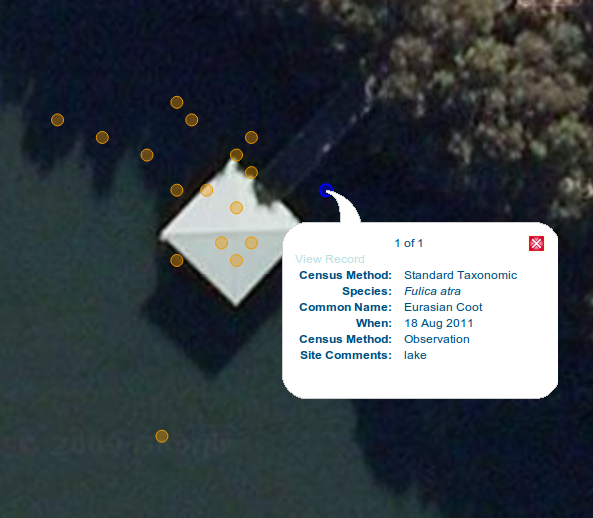 Each sighting (though not shown in the popup above) comes with it’s own accuracy value, which we pull out of the device on the fly.  That hide is approximately 5m square, and most of our sightings were actually coming up within 5m to 10m from the site, depending on each individual device’s GPS accuracy.  This is with commercially available devices, no GPS differential signal or anything like that – and that’s more than accurate enough for this type of survey work.  And it’s a big step up from the original issues we were having with the accuracy of these devices.

So on our trip this morning, we recorded 126 records and 24 species across the five of us testing. It wasn’t a very busy time at the lake, but it certainly was a useful exercise.  We’ll keep adding in updates on out testing regime and how we test as we go.

Posted in Blog
« On QR Codes
ISDE7, WALIS and the State NRM Conference »