In 2013, Gaia Resources was commissioned by the South West Catchments Council (SWCC) to develop an online Geographical Information system (GIS) for their organisation.  The system itself has been named – after an exhaustive polling process – the Geographic & Reporting Information Database (GRID).  It comes with the tagline:

“easy to use, online GIS for Natural Resource Management groups”

GRID enables all staff within an organisation (and even external users) to record spatial information about their Activities, against their projects.  This means that the group has a centralised knowledge base about all their work which is readily accessible to all staff members.  As this is an online system, all you need to be able to add, access and review your data is an internet connection. 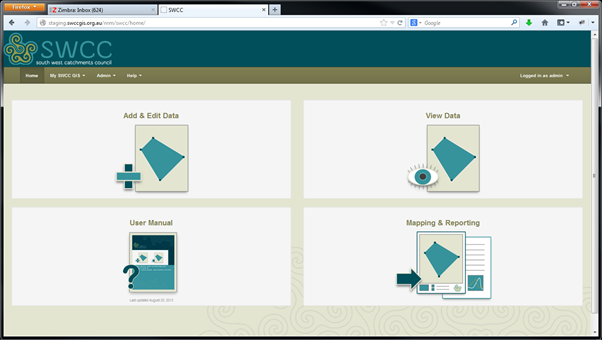 The GRID home screen, with a simple layout

GRID also allows staff to report on their own activities, or on the activities across projects.  We spent considerable time working on the reporting engine within GRID, and it can produce data (Excel spreadsheets, ESRI shapefiles) as well as publication quality map products.  In addition, the way in which the reporting engine has been structured means that a wide range of reports can be added to GRID, dependent on what data you store and what you want to report back on – so for example, SWCC have implemented a Photo Monitoring report that produces an overview of their photo monitoring for the history of their photo monitoring sites.

Moving an organisation to an online GIS is a big step, and we’ve worked with SWCC extensively to ensure that the system has been implemented smoothly, staff were thoroughly trained, and that we are able to  provide fast and comprehensive support.  GRID has really been embraced by the team at SWCC, with regular training being held and with good feedback from the staff about the performance of the product and how they use it.  GRID delivers a lot of efficiency in terms of their own activities – being able to quickly and simply record activities they have performed means that they can focus on doing more of these activities – not wrestling with a more complex reporting system, or even with a desktop GIS package.

From their side, SWCC have not only embraced the system, but have now agreed that we can roll GRID out to other NRM groups, and the first cab off the rank was Rangelands NRM.  The GRID implementation at Rangelands has been well received, with the system being used extensively to plan and manage their future projects.  The main difference between the two implementations is the definition of the activity layers (specific to each group, as they do different work), their projects (due to different funding sources) and the look and feel of GRID – which we bring in to match their corporate branding guidelines.

Gaia Resources  has taken the lead on GRID and are now managing it as one of our core products.  We are updating and reviewing GRID to ensure we are meeting the needs of its users.  For example, recently a number of SWCC staff reported a slowness to the GRID system.  After an extensive review, incorporating tests Australia wide, it was found that the issue was localised, and affected only a small group of people within a subset of offices in the South West.  Further testing ascertained the issue was with individual computers – and this problem has since been resolved.

GRID won’t stop where it is now and we’ll continue to manage and maintain it as a product.  We are currently undertaking some funded development on GRID to tweak the way external groups interact with the system, as well as a range of additional tasks on the user interface and bulk changes functionality.  These are really starting to add polish to GRID and we are really looking forward to the upcoming jobs with two more NRM groups to get additional GRID implementations up and running.  In the future, we see GRID being able to also work in conjunction with other NRM products, like Enquire and the new MERIT system.

If you would like to know more about GRID, you have a few options.  Firstly, you can read more about it on our web site.  Additionally, the team at SWCC recently put together a poster which we jointly presented about GRID at the national Natural Resource Management (NRM) Regions conference in Launceston – which I’ve included below. 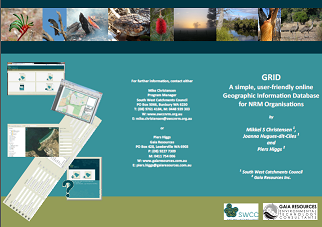 In the near future, I will be presenting a paper on technology in the NRM landscape at the upcoming Tipping Point Conference (Busselton, May 7th-9th), where I’ll briefly talk about online systems, including GRID, in that context.  At the same conference, Mike (SWCC), Joanna (SWCC) and I will present a poster about GRID as well, and you will be able to get a hands-on demonstration of it there.