We have been working with Ross Wood from the Goldfields Nullarbor Rangelands Biosecurity Association (GNRBA) to help target the work they do on baiting feral dogs – which are a problem not just for landholders running stock but also for the environment in these areas.  During this project, we developed a process to pinpoint specific areas where wild dogs would potentially roam towards and either live or feed, starting from Ross’ very unique project brief – “start thinking like a feral dog”.

Our initial discussions with Ross were focused around breakaways and how these could be mapped and analysed. Starting off with a few trial stations we derived breakaways from Landgate’s morphology dataset and terrain discontinuities from Geoscience Australia’s Geodata 1:250k series. Specifically, we extracted the slopes from Geoscience Australia’s 1 second Shuttle Radar Topography Mission (SRTM) Derived Digital Elevation Model (which has around a 30m resolution) and identified medium priority (10 – 15 degrees) and high priority (+15 degrees) areas, with low priority areas populated at the edge of rivers and waterbodies.

Some example preliminary maps from the process

In the second phase of the project we merged the above to form general areas to prioritise. As we had breakaways/discontinuities (lines) and slope above 10 degrees (polygons) we needed to do some data manipulation in order to create a propbability style heatmap, which was hoped to be able to show the areas where the baiting program should focus on. So we just ran a simple script to convert both the lines and polygons into points (centroids), and from this heatmaps were processed for the stations to enhance highly dense areas.

The final phase was to produce these results for a further 80 stations. With a combination of a mapbook layout, dynamic raster loading on each station, and complimentary layers each station now had its own prioritised areas for future dog baiting, like the one shown below. 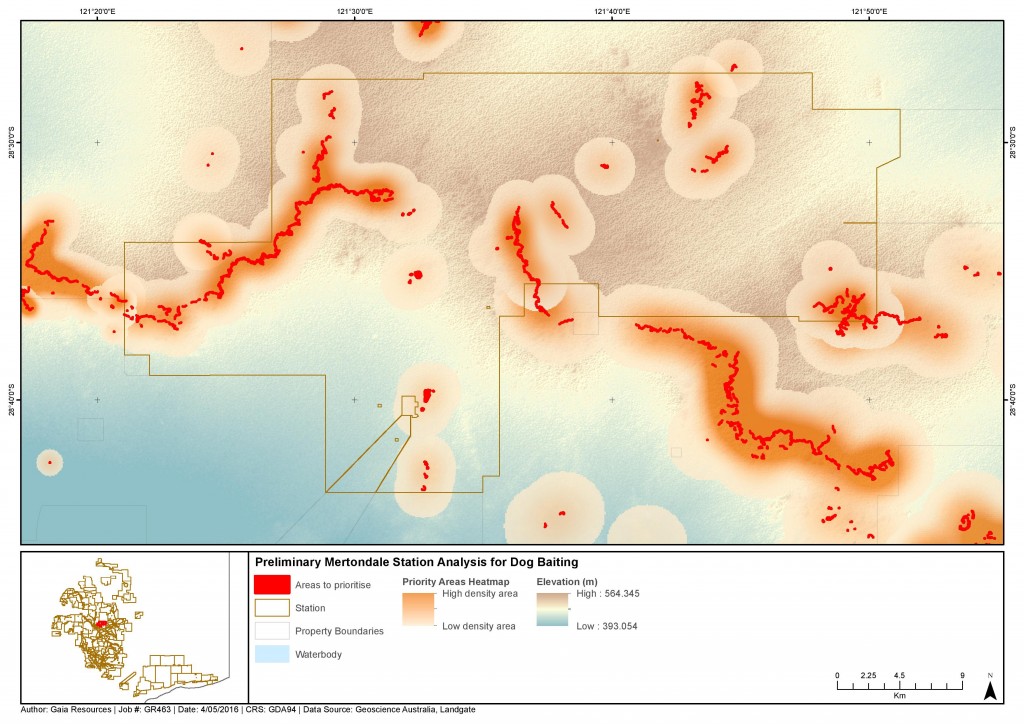 An example product, showing areas with higher probabilities for the presence of feral dogs

From these initial studies and analyses we are hoping to extend the project with GNRBA to produce additional products that are ready to be provided to the pilots who do the baiting, so that they can be more targeted in their baiting of areas, and to have these updated regularly based on additional exclusion areas.  All this will help the GNRBA and the stations protect their stock, and their local environment, in a more targeted way.

If you found this interesting and would like to know more, then get in touch with me through the comment section below, email or through one of our social media streams such as Twitter, LinkedIn or Facebook.