A while back we posted our first product pages about the Geographic Reporting Information Database (GRID) and you can read more about it here.  Originally born from a project with the South West Catchment Council, it is now a fully fledged product that we are supporting and maintaining for a number of clients.

Our team have been beavering away implementing GRID for several Natural Resource Management (NRM) clients now, and as part of that we have been making some updates to the software.  I thought that it might be time to publish something highlighting some of the new features in GRID…

GRID has always been able to support raster data (e.g. imagery) but hasn’t been able to do any form of query on those rasters.  We’ve recently added geoTIFF support (which allows us to drop in imagery and grids), and have also added code so that the identify tool can show the values within a raster dataset.  There’s a few other tweaks coming about raster dataset in the near future, too. 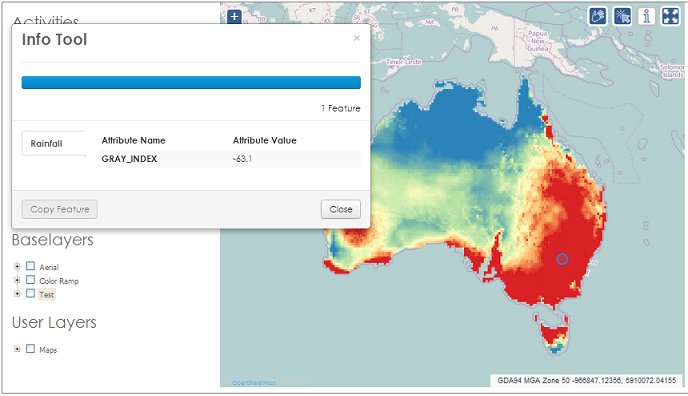 Load a raster dataset as a base layer, and then use the identify tool to determine values where you clicked.

One of the great new features of grid is that we have just implemented scroll bars on the sides of the map window in the Add and Edit screen.  It seems like a small thing, but it makes a big difference! 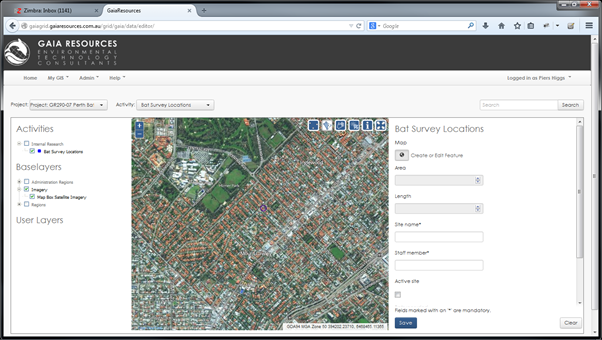 Scrollbars maketh the UI (in this case)

We’ve always been conscious of security of the systems, but we are also being more and more regularly asked to find ways to make the data in GRID available in other applications, like other interactive web maps.  To that end, we have implemented a “Public Layers” component, where clients can mark particular layers as being able to be used outside of GRID as a WMS feed.  This has opened up a few more ways to use GRID… more on that in the future.

All of these changes are in the new version of GRID, which will be shortly rolled out to all of our existing clients at no cost to bring them all up to the same version.

In addition to the work we’ve been doing, we’ve also been looking at the whole “Projects” concept in GRID.  We’ve hit a few snags along the way from the initial design, where we had a really restricted list of projects to choose from.  Now, as some clients approach their second year with GRID, we’ve taken it upon ourselves to look at re-working the Project area completely, as well as adding in more filtering to the views.  This will be a fairly major rework to get right in a flexible enough manner that it suits most people.

GRID has been more than just a project to us, it’s one of our first significant products.  As such, we are looking at how to best roll out the product, and we are putting together implementation packages that cover:

We’ve also been working on our maintenance and support models to accompany GRID implementations, and have a range of flexible options around support that can be rolled out for your organisation in conjunction with GRID, ranging from maintenance of the software through to comprehensive data management and support.

We’ve also been rolling out Quantum GIS as a complementary desktop package to GRID.  Recently, James wrote about our QGIS training courses and these environmentally focused courses have been received well.  QGIS has been growing in leaps and bounds and we’re now convinced it can be a suitable enterprise level GIS desktop package, so much so that our new QGIS training course will be starting in October (a bit later than we thought – but we had to get our training room repainted!).  Stay tuned for more info on our courses!

So in summary, GRID has been getting a lot of attention behind the scenes, and we will shortly be updating the instances for all our clients.

We’ve set up an instance of GRID specifically for groups to trial, so if you would like to test it, drop me a line in the office on 08 92277309 or via email.