I recently travelled through the red centre of Australia which was an epic family road trip from Darwin and included some incredibly beautiful stopovers including Uluru and King’s Canyon. At one point I came into a town/roadhouse with a small radius of mobile data coverage and – in between frantic downloading of new offline music and purchasing a few drinks and snacks for the next 300km leg – I read the news that Geoscience Australia had ended it’s long history of providing printed topographic maps 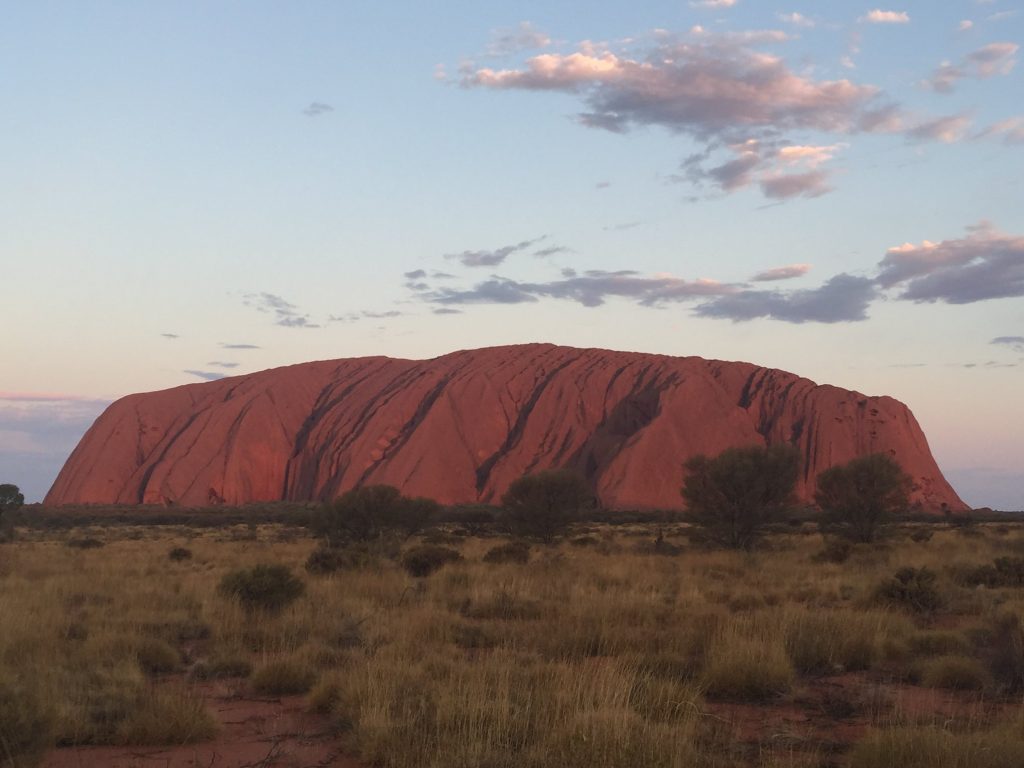 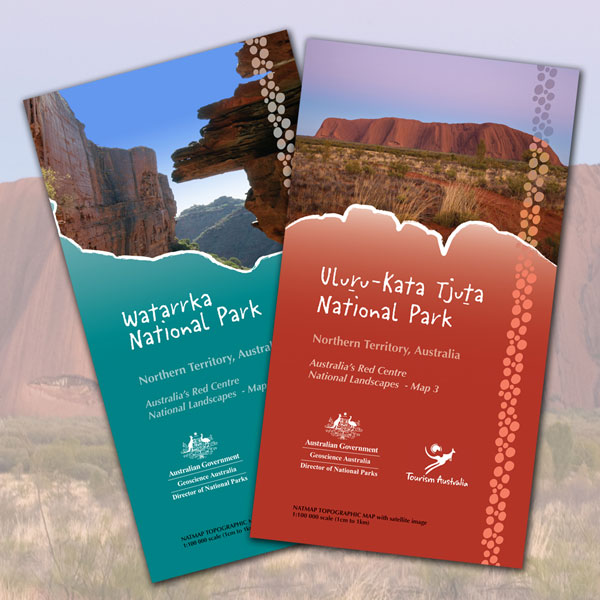 They still offer their widely used digital map products of course, but while our car passed through the spinifex spotted plains and dirt tracks heading to telegraph stations, meteorite craters and memorials, this news filled me with a sense of sadness and resignation, in the same way one might feel about the passing of a former Prime Minister or great author. There is a lot of history tied up in topographic maps, and many stories and discoveries to be made as one passes their finger from where they are to where they could go. Some might say you get a bigger picture with a hardcopy map, a broader perspective on the landscape. However, I like so many of us tend not to feel the need for hardcopy maps anymore. In saying that, I can vividly remember when they were essential kit.

Anyone over 25 years of age probably remembers the UBD and how indispensable that was for getting around the city and suburbs, or finding that elusive house party? How many of us, upon getting our first car,  received one of these map books as a present from a wise friend or relative? Now of course all that content is reliably available on our phones at the press of a button. Or is that actually true? Let’s ignore the 2012 Apple Maps debacle for the time being… When you think of remote area travel, and battery charging, the digital content is not available all the time really is it? Although this is something we work on with our own apps at Gaia Resources – but more on that later.

Now back to the recap on my trip – I’ve just left Aileron Roadhouse (with its seriously impressive 17m high Man on the Hill  and equally impressive Anmatjere Woman and Child sculptures). We’ve already passed through Alice Springs after having camped at a spectacular spot called the Ellery Creek Big Hole in the West McDonnell National Park. 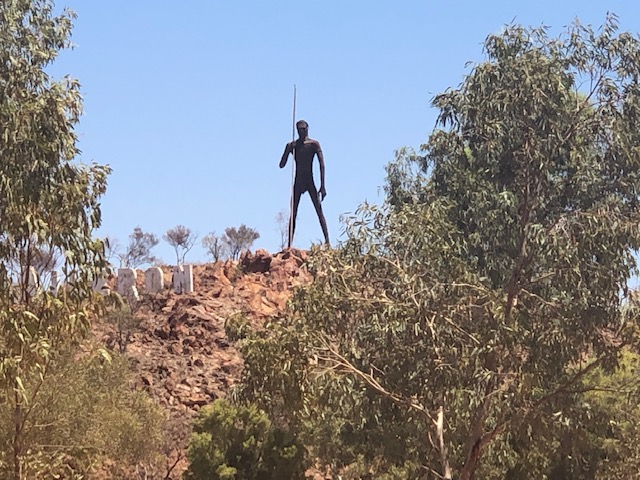 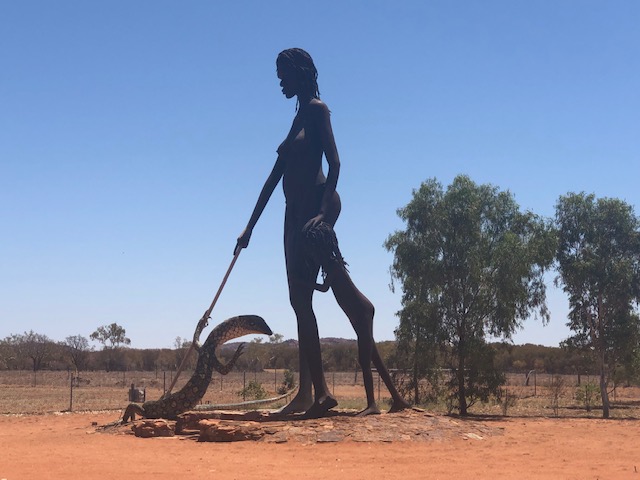 The 17m high sculpture of the Man on the Hill (left) and the Woman and child (right) puts Aileron Roadhouse on the map! Worth a stop.

This is a unique place of twisted folding rocks surrounding a water hole that would make any geologist forget how cold the water is and jump straight in to get to the other side (I feel a chicken joke coming on).

The Ellery Creek Bighole in the McDonnell Ranges was a seriously gnarly place 400 million years ago, and pretty impressive results today.

So within 2 minutes of driving north from Aileron we are again out of mobile data range, and I instinctively pull out the Australia Road and 4WD Atlas to reflect on the last few days travel and to look ahead. Yep, back to the hard copy map. In fact, the map book has been pulled out so many times now and used a way to discuss sealed and unsealed route options, distances and interesting spots to have lunch or stay overnight. It’s a way of sharing stories with fellow travellers at the pub and at the campground – friendly people who have been where you are going and can impart local knowledge of road conditions, food options and the value of taking a small detour to relax in one of many waterholes spotted through the truly massive Northern Territory. 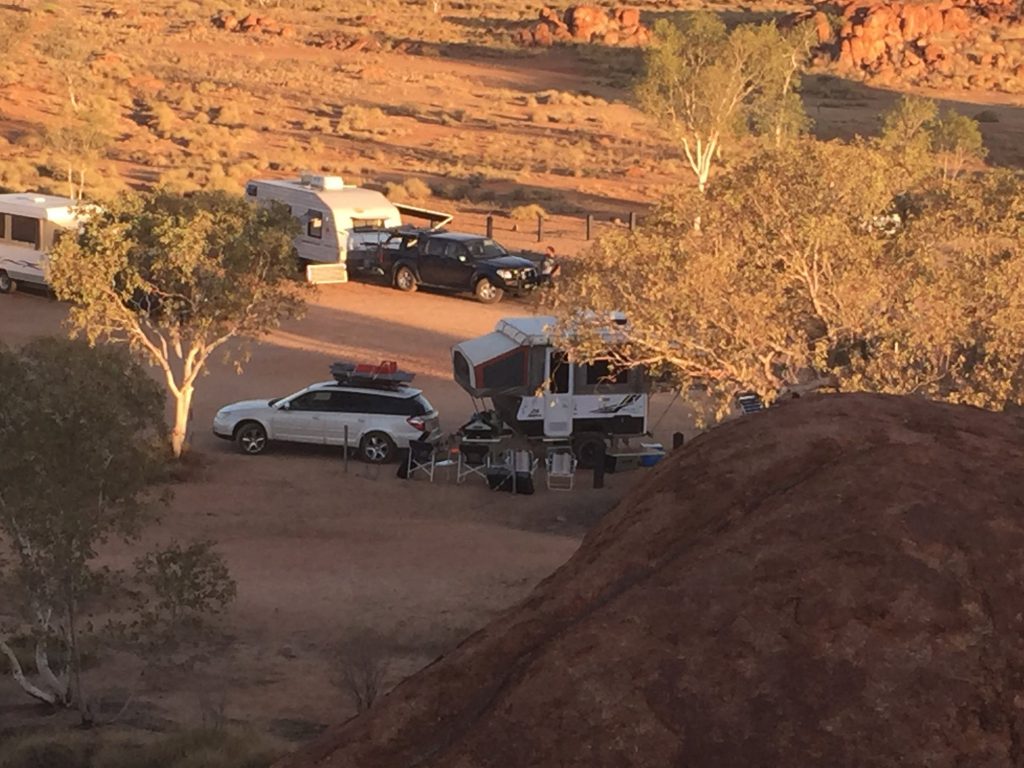 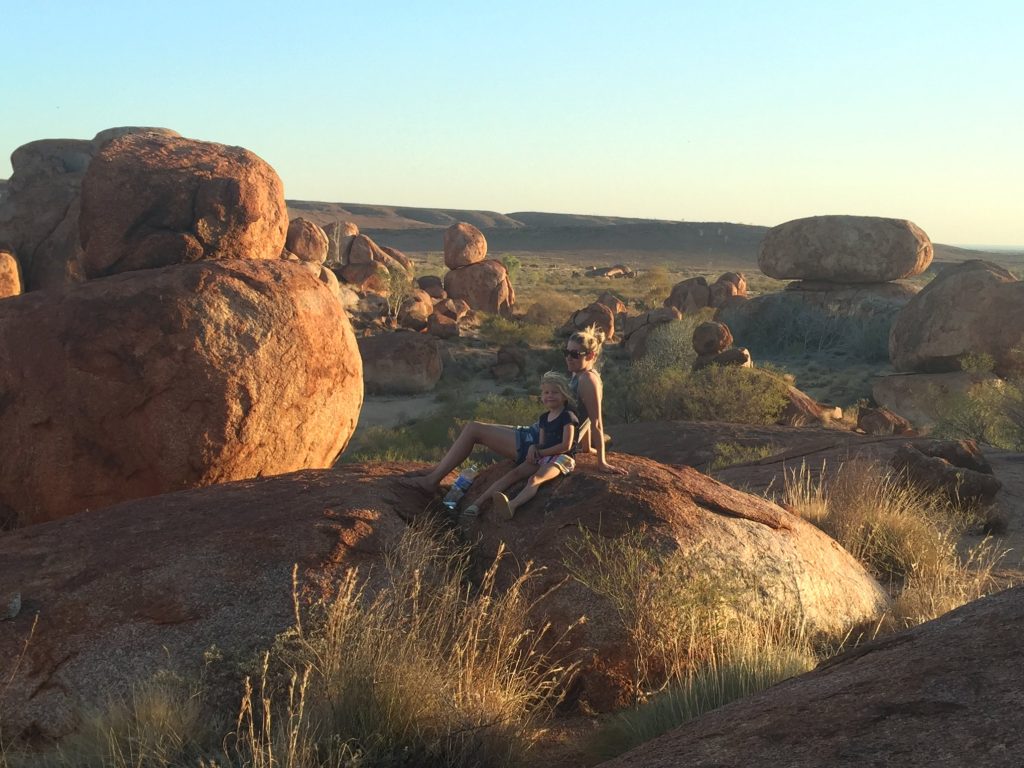 Our camping set-up at Devils Marbles (left) and the girls in my life relaxing at sunset. One of those magical places you might have driven past if it weren’t for someone at your campsite sharing their story.
Below: Play time! A Big Red joey kangaroo was being fostered at the Nyinkka Nyunyu Art & Culture Centre. 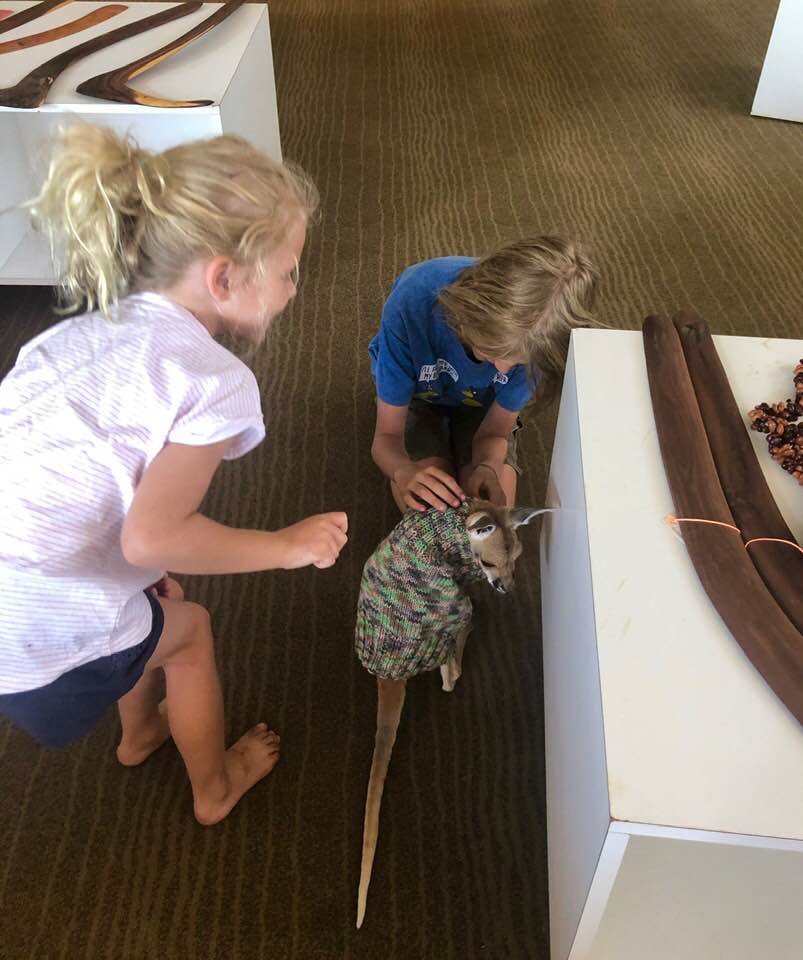 Using a map to share stories reminds me of the Australian indigenous people who have been doing something very similar for a lot longer than topographic maps have been around. We stepped in to look at a number of aboriginal art galleries on our trip into the Red Centre including at Uluru and Tennant Creek (the latter gallery had this little trooper at left as the main attraction).

It’s fascinating to learn how different regions use different styles of dot painting to share stories of the landscape, food (bush tucker) and water sources, and special meeting places.  In the  Nyinkka Nyunyu Art & Culture Centre in Tennant Creek for instance, we got to meet the female artists of the Barkely Region who paint circular patterns representing soaks (near surface water sources), bush tucker (grubs, ants, goannas) and medicinal plants.

In the region around Uluru, painting on canvas is relatively new but the women of the Anangu Uwankaruku Punu often combine dot paintings with the beautiful swaying leaf patterns representing medicinal plants like the Irmangka-Irmangka which is used as a sticky gel for tea, application on the chest for colds and headaches, or on bites and stings.

Groups around the Central Desert regions often employ the patchwork dot painting pattern I really like as a map geek because it practically represents an aerial interpretation of the landscape and different vegetation assemblages of their region. I can almost imagine the way in which their art serves a very practical purpose and focal point to educate and share knowledge.

I’m not saying that hardcopy topographic maps have been rendered to the status of a historical archive or art work – in fact we see old maps being re-used and delivering new insights to current challenges including the work Jake in our team has done previously with the State Records Office and their historical map archives. Visualisation of historical map features changing over time can help us understand the history of places and how cities grew and evolved. Government agencies are realising that their aerial imagery and cadastral map archives are treasure troves of information to help with planning decisions, genealogical enquiries and archaeological studies.

It’s been a long time since Gaia Resources had a plotter in the corner of the office pumping out large-scale maps for our clients – but it used to be all about those A0 and A1 plots depicting our client’s survey data, landuse and satellite imagery, unrolled fresh off the plotter and straight into a meeting of scientists and decision makers. As a spatial company in the early days, Piers would tell you we lived and breathed that kind of work.

These days we get more involved in system development and mobile applications with mapping functionality that depend on digital products like those from Geoscience Australia, the Bureau of Meteorology, and State government portals. Leveraging the Digital Earth Australia products for our NRM clients GRID web mapping system and Here as the base for the desktop app we’ve built for Wildlife Drones are good examples.

We have also pumped a fair amount of research and development into building an offline maps capability in our mobile applications – recognising that base maps like the 250k Topographic Series, Here, Google Maps and Mapbox offer offline APIs and are in demand for our clients working out beyond mobile range. In some cases – like for our Health department clients monitoring mosquitoes – it is actually as much about being offline in an urban environment where the field workforce can still collect location-specific field data using devices without SIM cards or wifi coverage. 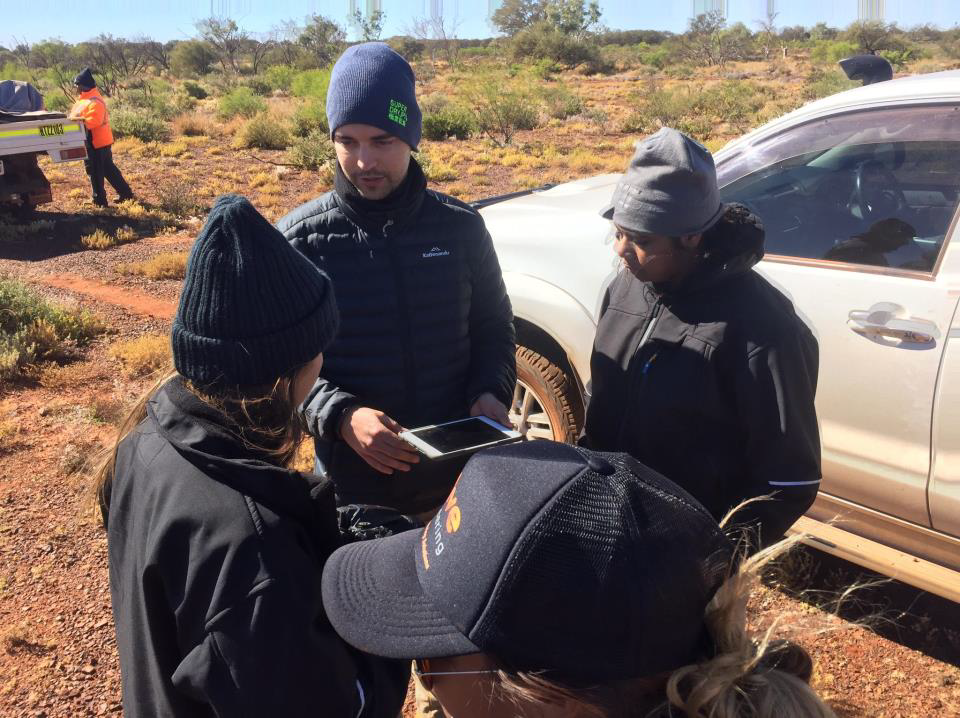 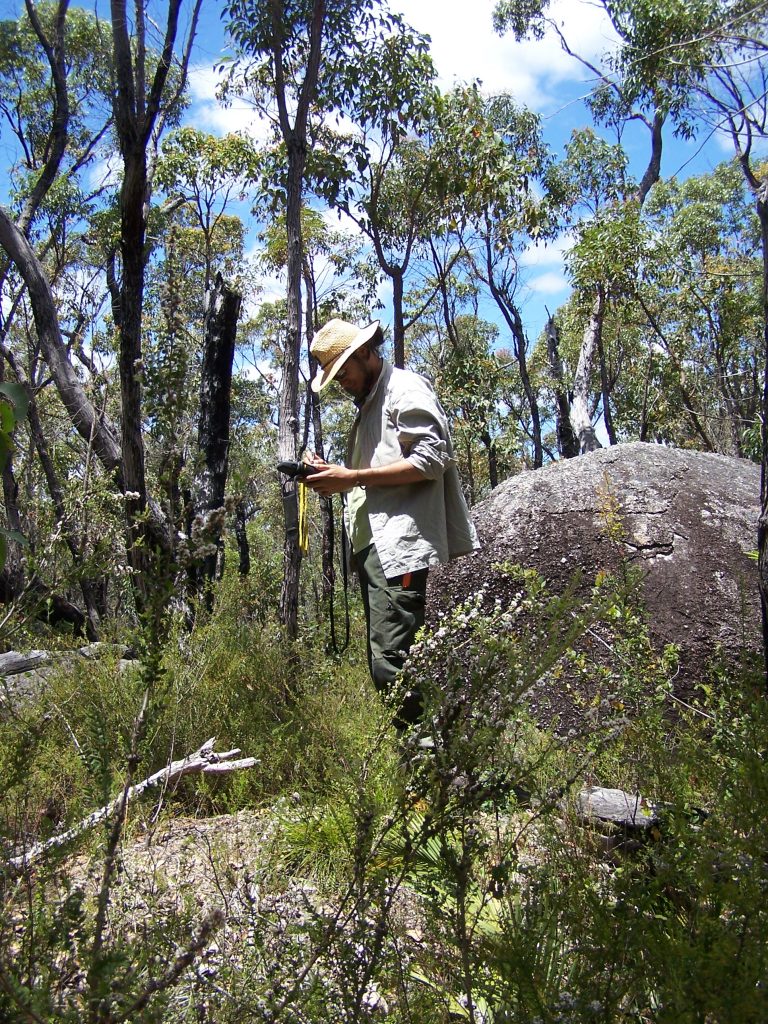 Jake from our team near Tom Price demonstrating a Fulcrum-based project for the Banjima Rangers (left). Field data capture and access to base maps can be challenging when you are deep in the Western Australian bushland (right).

On reflection, what I think you realise as a mapping professional is that you haven’t given up on those hardcopy maps – you have been part of a story of their evolution into something that continues to have great relevance in people’s lives. I love hearing about a new insight from an old map made digital, or a new digital product that could be a game changer for our clients – just as much as I still enjoy thumbing over towns and tracks on my 4WD Atlas as I travel around this big red continent.

If you’d like to know more about our work with historical maps, or how we can deliver digital mapping products, systems and mobile apps to help with your business, then please feel to start a conversation on any of the regular channels ( Twitter, LinkedIn or Facebook) or send me an email on chris.roach@gaiaresources.com.au.