We’ve been involved in citizen science projects for some time now, and I’ve been interested in finding ways to harvest biological observations from all sorts of different sources.  I thought I’d update on two methods I’ve been running for a while now, harvesting from social media – and a new one from traditional media.

Previously, you might recall we ran an experiment of harvesting observations of mole crickets from Twitter.  Initially we were just using this for a test of technology, but I also ran a bit of an experiment about how engagement drives your data volumes, as well.  You can read up on this on the following posts:

Well, we’ve just done a bit more of a revamp on our social media harvester, and this is because the mole crickets around my area are starting up their calling again, so I wanted to start doing some more recordings.  I even picked one up last week in the backyard.. 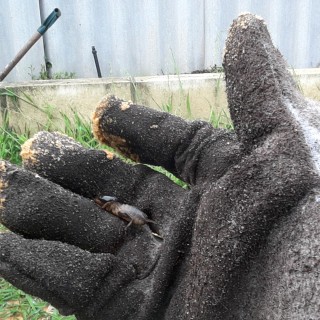 I’ve been using Hootsuite lately for Twitter posting, and I’ve realised from my latest post that I have to do a bit more tuning for the GPS accuracy in the settings – I’ve switched recently to a new Samsung S5 (and a Gear 2, which is where this photo comes from above).  In any case, we’re up to 98 sightings of the mole cricket through this experiment, covering a lot of my own records around Perth, but a few from more widespread locations (including an “absence” record from the middle of Western Australia, thanks Judy!).

The mole cricket survey got out a bit, through articles like this one from Science Network WA.  I got known by a few people as “the mole cricket guy”, much to my chagrin.  Interestingly, we had a few people volunteer sightings through email and our Facebook page, although there were some cases where people weren’t happy to provide locations (but others that did).  That got me thinking… I wonder where we can get other sightings from…

We’ve been working on Coastal Walkabout for a while now, and I began to notice that the sightings that we see from people logging records are sometimes also in the media, as was the case for Steven Sealberg, the elephant seal that hauled out at Sorrento beach in February, 2014.  He even made the news…

So, this got me thinking about the media as a source of biological observations, so I’ve been doing some trials of harvesting data from traditional media sources for Coastal Walkabout.  As a result, I’ve added sightings from all over Australia from a variety of media reports, as summarised in the map below:

A summarised map of my own sightings in Coastal Walkabout, the majority of which are from media reports

Although I would have loved to have gone to these places myself, the records are pretty much (apart from the ones in the capital cities) all from media reports.  Stories like this one from the ABC actually can deliver some pretty accurate information on the species, time, date and even a photograph.

Unfortunately, a lot of these are what I’d call “bad news stories” – they often depict the harmful interactions between humans and marine animals.  But I’d also call them “bad” for a few other reasons:

However, if I can find one story like this then I can usually find a few, and sometimes even a press release from an organisation that can fill in the blanks.

The difficulty is finding the stories in the first place.  I’ve tried using Google Alerts, but so far this is not producing any useful results.  The difficulty I’ve found is in coming up with alert terms that are actually reliable – using thing like “whales” brings back all sorts of news stories about protests and whale-watching which we need to then work through manually to identify any gems of data.

I’ve also noticed in my trawls that some organisations – like Surf Life Saving WA – post sightings and reports via their own Twitter account.  That is a potential source of observational data using this manual process but it could also be harvested with the appropriate settings, like geolocation, species and an identification hashtag, through the social media harvester.  Or we could try to interpret the location based on tweets like this one:

An example SLSWA tweet, posting infromation from Department of Fisheries

So far I’ve found the most reliable means to harvest observational data is to simply do some searches of the ‘net using terms like common names, “stranding” and so on, but I’m also seeing a lot of interesting articles from my friends on Facebook which are pointing me to a range of articles I’d otherwise miss.

There’s probably a few things that media providers could start to implement to help automate this sort of data harvesting, like:

The traditional media does look like it’s a potentially good source of data, but the challenge will be in how we can automate this to come up with some great outcomes.  I smell another experiment coming… and a lot of engagement to do.

Got any good articles yourself?  If so, drop me an email, or post them on the Gaia Resources Facebook page, or drop us a line via Twitter.

If you are interested in participating in some of the citizen science projects we’ve been working with, then have a look at Coastal Walkabout, Dolphin Watch, or the Bunbury Dolphin Discovery Centre.  Either Alex or myself would be happy to talk to you about how you can contribute as a volunteer citizen scientist, as a scientist looking for volunteers, as a project leader, or as a group interested in having your own technology solutions for your project.