I spent three days last week in Melbourne, and am just flew back to Perth from the Gold Coast last night (no slowing down for me!).

Speaking of flying, here’s an aside; I realized on the way over to Brisbane that I have been remiss lately in not updating my flights on OpenFlights, too, so I did that last night when I got back.  I have been slowly putting together the calculations that the Openflights developer team need for carbon emission calculations in all the spare time I’ve got – so yeah, that’s not done yet.

Last week I was at Birds Australia, where I spent the majority of the three days working with a range of their staff, demonstrating the functionality that we have put into their implementation of the Citizen Science software we have developed for the Atlas of Living Australia (ALA).  It was a really full-on trip for me – I spent a lot of time trying to get my head around the processes and procedures that the gang use over there for their separate projects, and trying to work out how to replicate their paper forms in our on-line software.  I was really impressed that in the three days of testing, I didn’t hit any crashes in the software – and I hammered it. The BA team were inspired by the software, and we’re working now to replicate as many of their forms as we can in the testing site, ready for them to bring into the production site, and get people recording data on Australian birds straight away.

I did a small detour on that trip, when I spent an afternoon with Museum Victoria. We spent that time reviewing where we are at, where we want to go, and what the reactions have been from their team at the Museum to their implementation of the ALA citizen science software, running at Biodiversity Snapshots. The reaction there was pretty different, but very enlightening.  One of the things I kept hearing was “why isn’t it as pretty and easy as an iPad application?”.  Our team has been working on this since our big ALA launch last week, focusing on improving the way the mobile components are accessed.

I’ll avoid ranting about iAnything, but this ties in nicely with the second part of my trip.  I went to the Gold Coast to do a joint presentation at the 2010 eResearch forum in a workshop about mobile science with Scott Mills and Justin Baird, with my bit being about how you can achieve platform independence by using the HTML5 web standard, a very new set of standards only now being implemented across the browser community.  My presentation is tucked in below as a PDF. 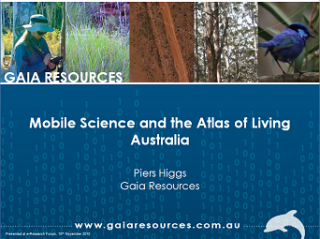 Our mobile work in the ALA citizen science tools uses some of the neat features of HTML5, and allows our software to be downloaded and run offline (like an iApp) in some browsers.  By choosing to develop the mobile application in HTML5, rather than develop an iApp, we can immediately put the same software to work on any online mobile device, and also offline in Windows laptops, iWhatevers and Android devices.  This means that we capture a lot of the different mobile device platforms out there with one single codebase (although offline has a more restricted set of platforms), and we don’t then have to support multiple versions of the same software.

Mobile web apps make sense if you want to avoid developing multiple times for multiple platforms.  Ours are not (currently) as pretty as iApps, but we’re so (b)leading edge in this space right now we’ve got a lot more to play with.  So stay tuned, because I think this space is going to get really interesting, really quickly…