We recently completed a technical investigation into leveraging Sentinel satellite imagery for monitoring forest canopy cover in forested areas in Victoria. The investigation was a really interesting deep dive for our data scientists into some free and open-source analytical tools and techniques our client could use to assess one aspect of bushfire risk. The client wanted a repeatable operational tool they could use to hone in on areas of higher risk, and make some informed decisions about where to focus limited field resources.

Forest ecosystems play an essential role in the environment. Monitoring and detecting change in forests is important for the development of conservation policies that would lead to sustainable forest management. For this purpose, Earth Observation (EO) data can be analysed in order to assess disturbances in forest vegetation, as it can reach a worldwide coverage with a high temporal frequency at a low cost. Currently, remote sensing techniques are being used to process EO data from passive and active sensors, providing fast and accurate results across a wide range of applications.

The idea for our particular study was to look at Sentinel-2 (optical) and Sentinel-1 (Side Aperature Radar, or SAR) inputs into a processing model that outputs a regional NDVI raster coverage. The Sentinel imagery captures an image every 5 days for a given patch of the world, and so the potential was there to look at a long term monitoring and change detection tool. We needed to assess the imagery products to see if they could give us useful and consistent output, and groundtruth that against known areas of change on the ground. We also needed to know what technology was out there to help us in this challenge, and what others (researchers and private organisations) had done to solve similar challenges.

The Sentinel-2 platform (left) from the European Space Agency provides coverage every 5 days that can be used for forest canopy cover applications.

We started with a literature review to uncover research that had been conducted on the use of Sentinel and Landsat imagery on forest cover change, both in that south-eastern parts of Australia, nationally and overseas. This step also included looking at current ground forest canopy assessment techniques. With the short term nature of our investigation, we had to really target and timebox our search, and we were able to find some really good material from reasearch at universities across Australia and major research organisations. The Veg Machine project and the previous work done by its originators Jeremy Wallace and Bob Karfs at CSIRO on long-term monitoring using Landsat coverage was an inspiration for our modelling approach. As were the personal experiences of our team members from previous projects and roles.

The literature review had another more software focused aspect to it, as we were looking at a number of analytics platforms that would be the processing backbone and visualisation tool for our modelling.  From this we decided to pick up some Jupyter Notebook scripts in Geoscience Australia’s Digital Earth Australia (DEA) platform, and leverage the Google Earth Engine (GEE) platform. The DEA product enabled generating outputs for a regional scale view, and the GEE platform enabled users to produce NDVI plots on demand for a given local area. The two platforms complemented eachother by providing that regional overview and target area time series plots. 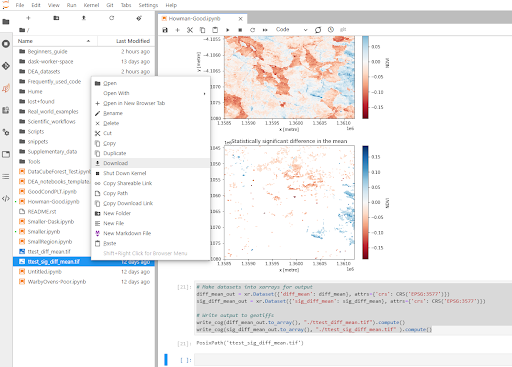 The Digital Earth Australia (DEA) platform and Jupyter Notebook scripts configured for the regional comparison of NDVI images against a long-term baseline. 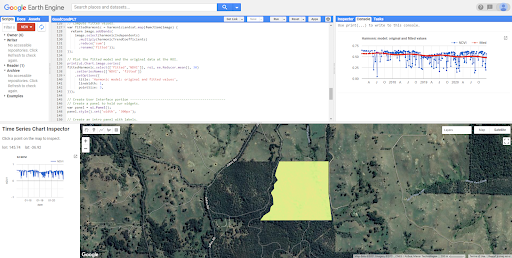 The Google Earth platform enables users to look at time series plots of NDVI for an area of interest.

We devised a modelling approach that would ingest new Sentinel imagery inputs and compare them against a 3 year rolling NDVI baseline. If the new image contained pixels above or below our thresholds, then it would simply show up as a different colour on the mapping: green for significant positive change, red for significant negative change. In this proof-of-concept investigation, the client was happy to look at simply detecting a change of significance; and the reason for that change was something they could target and follow-up on. That reason could be anything from heat stress, planned/unplanned, land clearing, fire activity or disease. We also considered seasonal differences and frequency of images for processing within that modelling approach.

Finally, operational staff at the client’s offices use ArcGIS and QGIS software for a range of mapping and analysis tasks. The final raster outputs from the DEA and GEE platforms are capable of being visualised and analysed further in GIS packages along with other key operational and administrative layers. 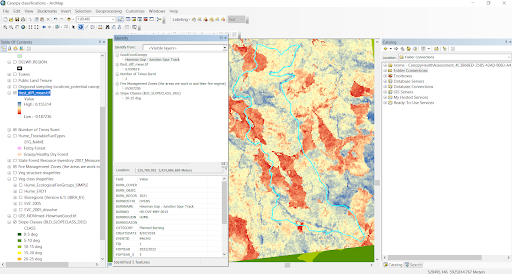 GIS software can visualise the raster outputs from the modelling for further analysis and decision support.

So as a first step proof-of-concept investigation, we were able to document a technical and operational approach for our client to detect forest cover canopy change and support their bushfire risk decisions. The next stage coming up will be all about implementation and scaling a solution on AWS cloud infrastructure.

We’d love to hear from you if you have been involved in using any of the tools or applications mentioned here, or you’d just like to have a chat out of interest. Feel free to contact me or hit us up on Twitter, LinkedIn or Facebook.