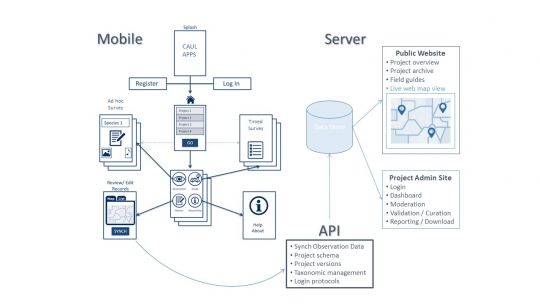 Gaia Resources were engaged by the University of Melbourne’s Clean Air Urban Landscapes Hub to develop a citizen science app to enable data capture for a range of urban species – bell frogs, flying-foxes and beneficial insects. This Hub is one of six in the National Environmental Science Programme (NESP).

The design allowed for multiple projects to be available via a single app login so that volunteers could choose to participate in any project. Each project had an independent data schema and the app would check in to the schema server on startup to ensure the latest schema was in use. This saved users from having to update the app in some circumstances when schema changes were made.

All projects allowed for ad hoc observations of the target taxa to be recorded. The Flying-foxes also provided for foraging species to be noted from a controlled list, and a ‘map view’ of all project records to date. Frogs and Beneficial Insects additionally provided a timed survey component that required additional training to be taken online in order for that functionality to be unlocked for each trained user.

Images and recordings associated with each record were also able to be uploaded, to aid the researchers in validating the identity of the taxon being observed, via the curation component in the backend.

Importantly, additional projects can be added to the app over time using the flexible schema server model.
For example, in 2019 a major Possum and Glider project covering all Australian species was added to the Urban Wildlife app. This was also significant as it was a project arising in a sister NESP project – the Threatened Species Recovery Hub.