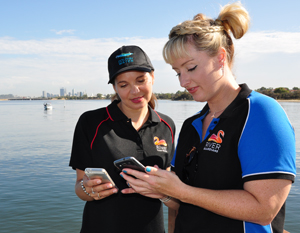 As part of the Coastal Walkabout citizen science hub, we have developed and deployed a mobile App for the Dolphin Watch project, for both Android and iPhone devices, and in March, 2017, we released a new version, rebuilt from the ground up.

This project initially involved the creation of a new Dolphin Watch App for the project, which was based on the Coastal Walkabout App, but with two major changes;

In terms of infrastructure, the original Dolphin Watch Apps deliver observations of the Bottlenose Dolphins to the Coastal Walkabout implementation of the BDRS, where they are then added to the wider range of data available for research.  The Apps also deliver the Dolphin Watch survey data into the Dolphin Watch database that is managed by Swan River Trust.  The new version – 2.0 – changed all this, and has a new framework and back end system, based on our Project Hydra citizen science toolkit.

We have written a number of different blogs about this project, including:

You can get the Dolphin Watch app for free from the iTunes or Google Play stores by clicking on either of the buttons below.

In 2015, the Dolphin Watch project was also a finalist at the WAITTA INCITE Awards in the Society category, and became a national finalist.