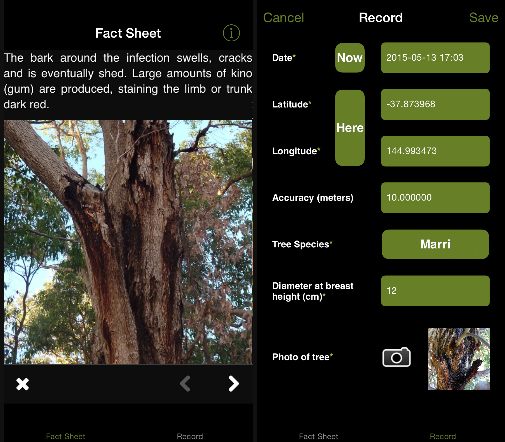 Gaia Resources worked with Murdoch University’s Plant Pathology group to develop an app for recording Marri Canker disease around Western Australia.  The Marri (Corymbia calophylla) is an iconic tree species and plays a major role as a food source, habitat tree and refugia for numerous vertebrate and invertebrate fauna, as well as being a key species for southwest beekeeping and honey production.  Cankers are a symptom caused by the death of areas of bark and the cortex tissue below, and progresses over time to a point where it girdles the affected limb or trunk, resulting in the death of the branch or entire tree.

This was our first terrestrial citizen science app, launched back in December, 2013, and in early 2015 was given a round of polishing and re-release of the app.  You can read more about the launch of the app on our blog at this link.

The app can be downloaded from the various mobile stores at: