One of our clients had a request to get a camera operating remotely from a Trimble Yuma unit (we are Trimble resellers, after all).  The guys played around with it over the last week, but I finally got some time to play on Monday myself, with a few other cameras to see what was possible.  The problem in a nutshell is that an Olympus DSLR E-330 camera needs to be remotely fired from the Yuma unit via a long USB cable, and if possible, using a live view of the viewfinder.

I left the problem with Timo and Andrew to deal with two issues – the problems we had with an older version of MapInfo 9.5 not updating properly under GPS view, and also the camera.  After the MapInfo issues were sorted out (with an upgrade to 10), Tim then chased up Pine Tree Computing’s Camera Controller software, but our Yuma runs Windows Vista – and Camera Controller doesn’t run on Vista at all, so unless we downgraded the Yuma (which would cause all sorts of other problems), that ruled that out.

So, on Monday, I had a play around with other software myself, bringing together a few ideas and a few different cameras to see what I could do with it (instead of working on the report I was supposed to be working on). 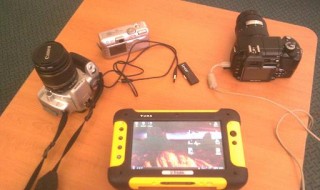 I started with Sabsik’s Cam2Com software.  That works OK on the Yuma, but wouldn’t connect to the E-330 camera – turns out the E-330 isn’t supported.

So I grabbed the office Canon Powershot S30 and gave that a whirl – the first problem is that Windows doesn’t seem to manage installing the S30 well, so I had to go digging for the right drivers, and get that installed as a starting point.  That was problemmatic by itself, but eventually I got the right drivers here.

The next thing I tried was connecting with Cam2Com with the S30, which is supposedly supported, and that just wouldn’t work. I couldn’t get that to be recognised at all, so in the end I gave up on that and went hunting for the Canon software, to see if I could get it to work.

Canon’s RemoteCapture software I downloaded (eventually from CNET, here) seemed to be a good bet, but it crashed on my first go!  It seemed to close down processes on the Yuma everytime it connected to the camera, and generally just wouldn’t work.  I was pretty disappointed in that as an outcome.

After another trawl of the Internet revealed Breeze System’s PSRemote software, which installed nicely.  I then gave it a crack and it crashed, like the RemoteCapture software – then I realised I was missing a CF card in the S30!  Unfortunately, even with the CF card installed, PSRemote still crashed. It just fails when the picture is taken. However, the RemoteCapture software worked now (that’s software that could do with better error handling!).

So finally, I got out my own camera, a Canon EOS 400D, and downloaded Breeze Systems DSLR Remote Pro software, and installed that.  It works really well in for remote capture, but wouldn’t allow a live view.  Live view is only supported by particular cameras, and unfortunately my EOS 400D isn’t one of them.

Hopefully our playtime will help someone out there who has to do this again some other time.  When I get a live view happening with a unit, and our client is out there using it, I’ll document this as a follow up.

Posted in Blog
« Emergentweet
Do you know what biosecurity means? »