A few weeks ago I headed along to the Savanna Fire Forum at Charles Darwin University, and to the subsequent Emissions Reduction Scheme workshop hosted by the Department of Environment and Energy. Over those three days I was able to meet people in the evolving carbon farming industry from across the northern jurisdictions of Western Australia, Queensland and the Northern Territory. There was representation from Indigenous land managers, ranger groups, fire practitioners, park managers, pastoralists, scientists, program managers and carbon industry practitioners.

Gaia Resources has some experience in supporting groups who get involved in the fire management industry, such as our friends in the RangelandsNRM group, Conservation Management (through their work with the Pilbara based Banjima Ranger group) and Bushfire Prone Planning; but I must admit this forum was an eye-opener in terms of the breadth of experience and capabilities, and wide range of stakeholders in this sector. The following are just some of my thoughts and observations from the perspective of an interested data scientist new to the Top End – so feel free to point out if I’ve misrepresented anything. 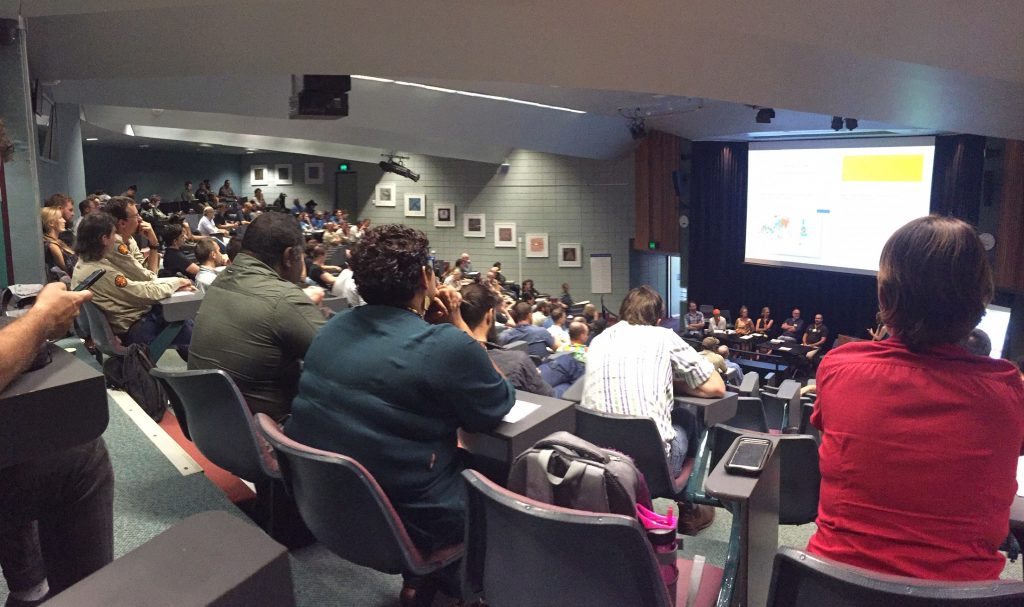 Hundreds of professionals packed the lecture theatre at Charles Darwin University to hear industry experts talk about a range of Savanna Fire topics.

Carbon abatement in this context refers to the avoidance of large-scale severe fires that destroy woody vegetation, but paradoxically the way to achieve that is to burn stuff, albeit in a controlled way. Across the north of Australia this woody vegetation represents a massive carbon sink – actively taking carbon out of the atmosphere and helping to offset our nation’s emissions from other sources. It is almost counter-intuitive to think that a program of burning would help in the fight against climate change (seeing as that burning itself releases carbon), but through better land management practices involving the controlled burn-off of fuel load (mainly grasses) at the right time of year – Indigenous ranger groups and their industry partners are able to reduce the severity and destruction of bushfires later at the driest time of the year. In fact, savanna burning is something that our indigenous people have been doing for thousands of years!

Caring for country and the opportunity to get back onto the land was a strong recurring theme in the stories that were shared by ranger groups. So although I’ll talk about the science and the data and the policy later in this article, what really matters to the people on the ground is their connection to the land and the chance to contribute to the health and sustainability of land and culture for future generations. The conference was a great chance for ranger groups to share their stories, such as how birds of prey intentionally light fires to flush out wildlife.

Mimal Land Management has been managing fire for many years – this video talks about a bird they call Karrkanj (or “troublemaker”) who picks up burning sticks and flies to a fresh piece of grass to drop it.

The conference really seemed like a win-win situation to me how the Commonwealth government is funding programs that helped to provide meaningful employment, reduce carbon emissions and support Indigenous culture and way of life. Striking the balance between the environmental, social and economical outcomes looked to be a big challenge, but one well worth the effort.

The key point from an environment perspective is that late dry season fires after about 1 August tend to be hotter and more destructive to the savanna landscape than the early dry season fires; or, put another way, if leaves and grasses can be burnt early in the dry season, then the carbon-sucking trees and big shrubs can hopefully live on for another year. Some of the presentations at the forum talked about project monitoring and evaluation, and the analyses that could demonstrate the effectiveness of conducting early season burns to prevent – or reduce destruction of – late season burns. Bar graphs abounded in the presentations showing program effectiveness through ratios of early season to late season percentages by year, and the so called “M-curve” was another graphical way that caught my attention to demonstrate how active fire management practices were making a difference. The statistics in this case were based on areas calculated from satellite imagery of projects across the Cape York Peninsula. 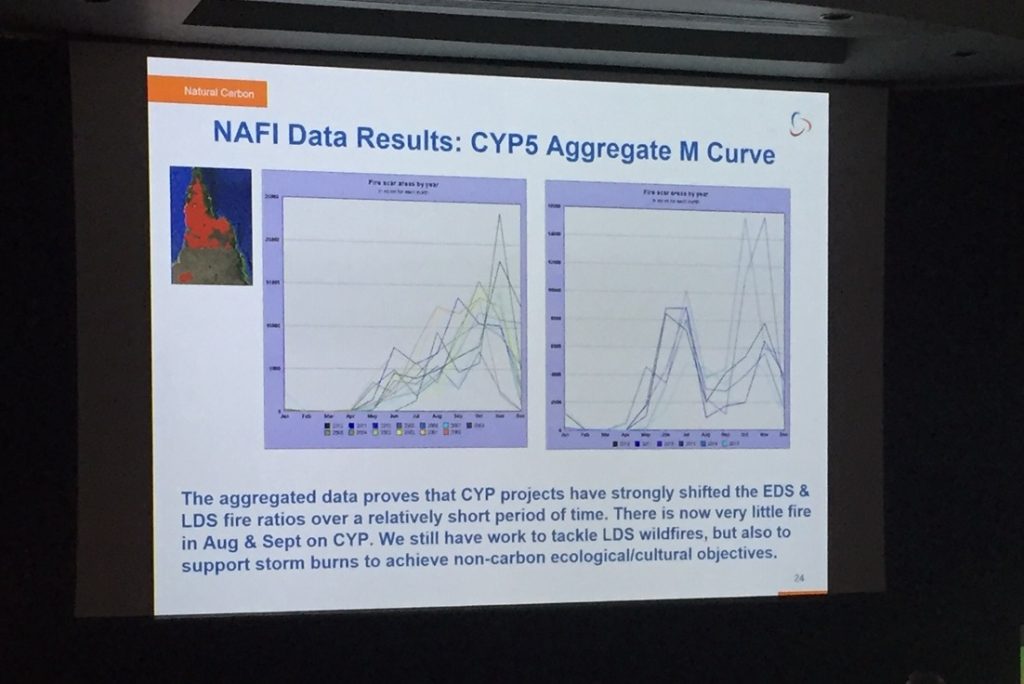 The situation on the ground is more complex with many variables at play. For a start there’s a coverage problem, the vast areas of land we are talking about here can’t be burnt off with the limited number of people and resources available – so ranger groups need to think strategically and make informed decisions through mapping of fire history and estimating fuel load. This is all about mapping risk and making operational decisions, and it was encouraging to see that ranger groups were actively using satellite imagery resources such as the NAFI (North Australia Fire Information) website. NAFI offers time-series fire scar mapping and hotspot locations based on NOAA and NASA MODIS satellite data – with analysis and data management from Landgate, Geoscience Australia, the Darwin Centre for Bushfires Research and from Cape York Peninsula Sustainable Futures. Mapping the landscape in terms of years unburnt (as a proxy for fuel load) for instance could be one of tools to help prioritise where to apply limited resources. 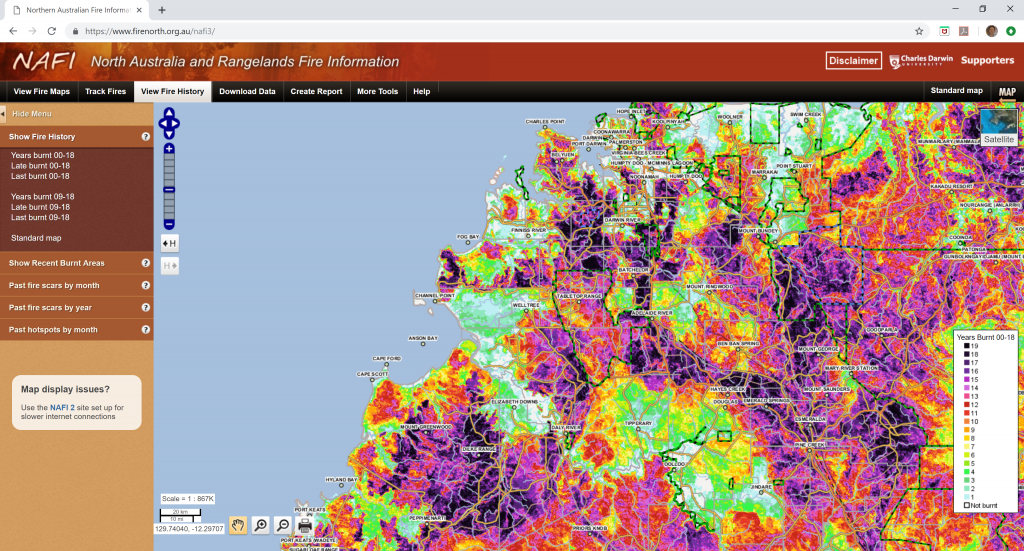 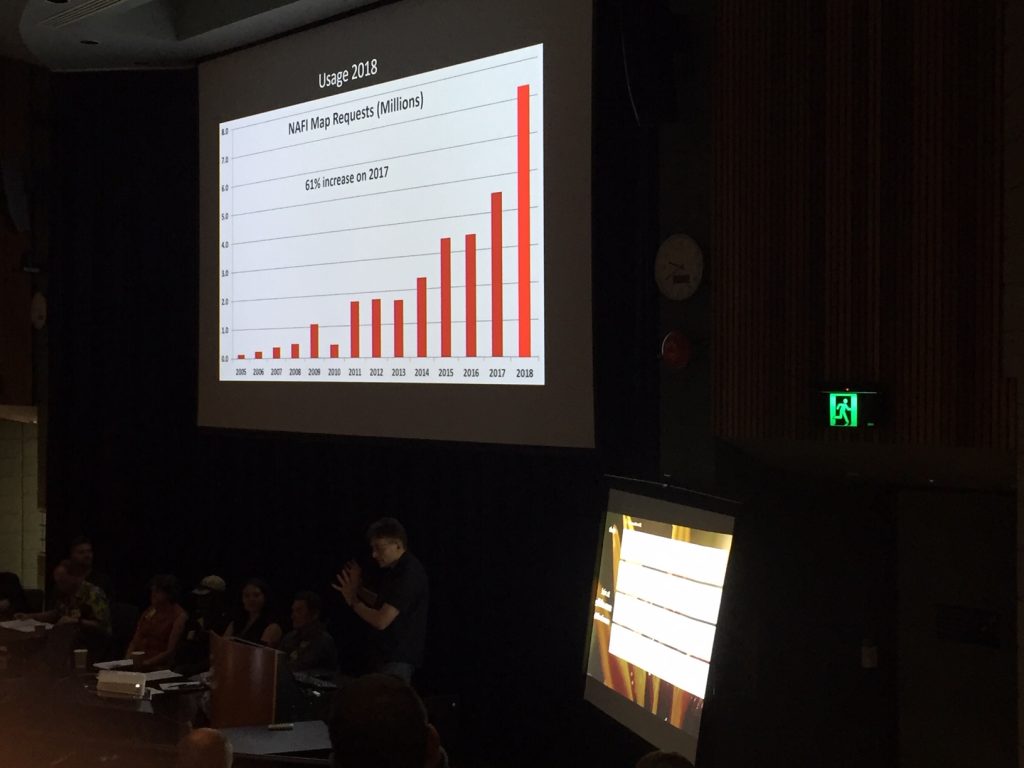 The NAFI web map (left) provides a range of fire history layers for visualisation and data download, including fire scars by month, and the number of years burnt. The number of map requests (right) has seen a big uptick in recent years.

Weather and climate trends are major factors that influence fire frequency and behaviour, and also the logistics of carbon abatement projects. As I learnt in the forum, drying climate trends and weather patterns can narrow the time window available for controlled burning, and shift limited resources into a fire suppression mode (eg. bushfire fighting). The fire mapping from NAFI again becomes important for fire suppression planning, as (I suspect) does rainfall data, the location of fire breaks, roads and tracks. Radar and near real-time lightning strike data (from the Bureau of Meteorology and Landgate) could also be important operational information; for example, in one presentation we heard that storms can build up in one region without dropping any precipitation, and as the system passes through the lightning strikes ignite many small fires that need early attention. 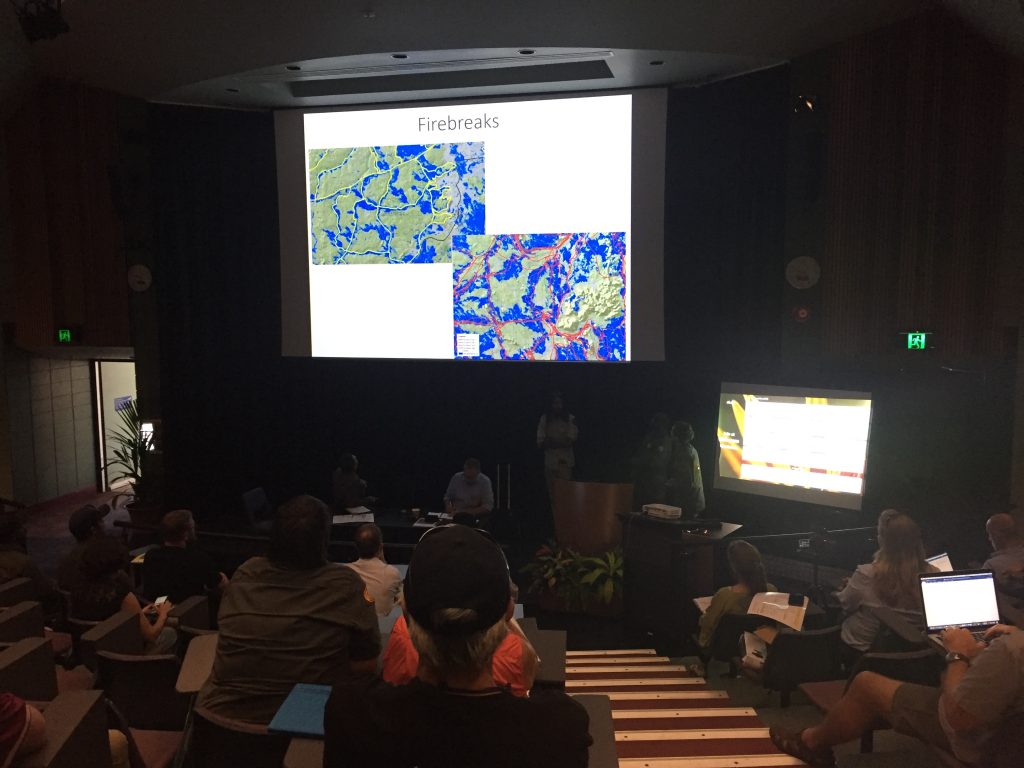 Fire scar mapping with an overlay of fire breaks shows the effectiveness – or otherwise in some cases – of these suppression techniques.

The subject of weeds – and in particular Gamba grass – came up over and over as a major factor influencing the severity and behaviour of fires in Australia’s north. This tall grass was originally introduced in the 1930’s as a cattle feed but it has since infested an estimated 1.5 million hectares of the Northern Territory alone and is one of 32 weeds of national significance. Fires are so severe where Gamba grass infestations are present that they can burn up to 9 times higher than native grass fires, and as a result the cost of controlling these types of fires is significantly higher (source: Gamba Grass Roots). The Northern Territory Weeds Management Branch have a Statutory Weed Management Plan for Gamba grass requiring landowners to report and remove it. For more information including maps of the weed’s distribution can be found on their website.

Grey Mackay from RangelandsNRM presented on fire management programs that organisation was coordinating in the Dampier Peninsula and Kimberley region of Western Australia, and some GIS visualisation wizardry to bring focus on the temporal change and relationship between early dry season and late dry season fires. After his talk, Grey and I used morning tea to check out the landscape model visualisations that Rohan Fisher from Charles Darwin University Research Institute for the Environment and Livelihoods had on show (more info on: https://www.landscapemodels.net ). 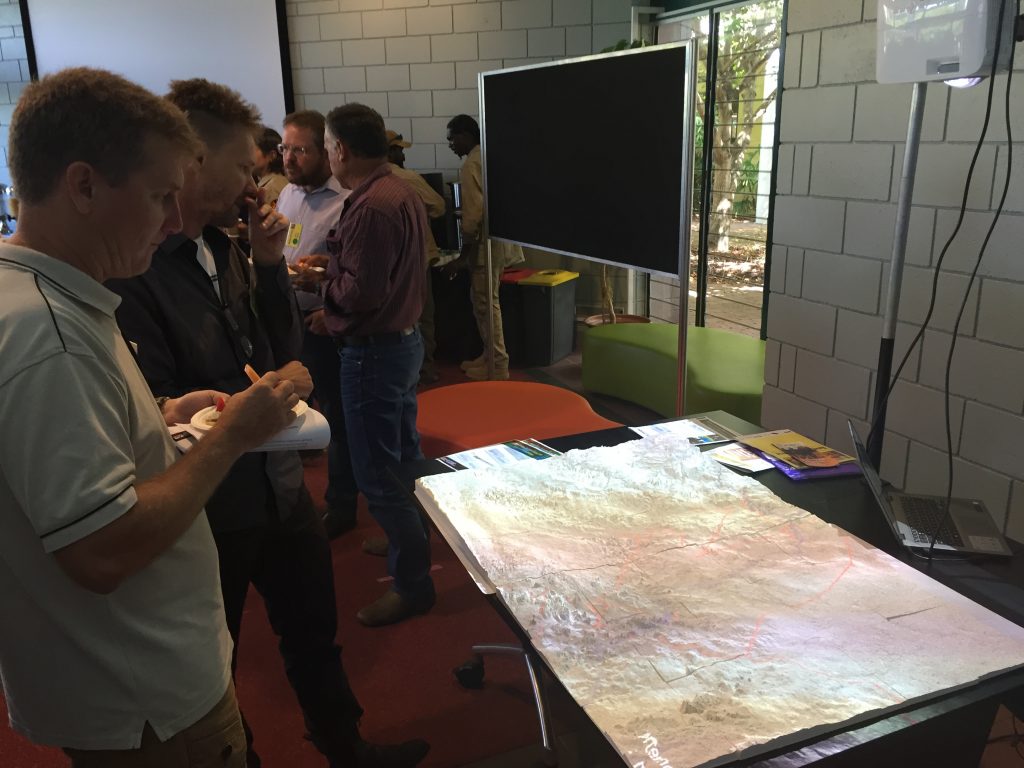 Rohan also presented the imagery resources available from the Sentinel-2 platform which consists of two satellites from the European Space Agency (ESA). This relatively new entrant on the satellite remote sensing scene offers free 10m resolution and 13 band multispectral imagery every 5 days over a given patch of ground. The increased resolution over Landsat imagery (at 30m) is quite significant, because it allows people working in this industry to see much more detail in the landscape. For instance, they can better assess the impact of fire breaks and the degree of fire ‘patchiness’ which might be used to understand the effectiveness of fire burning programs. Other fire-related applications are also possible with this information, including the study of remnant wildlife habitats and assessment of biodiversity impacts. 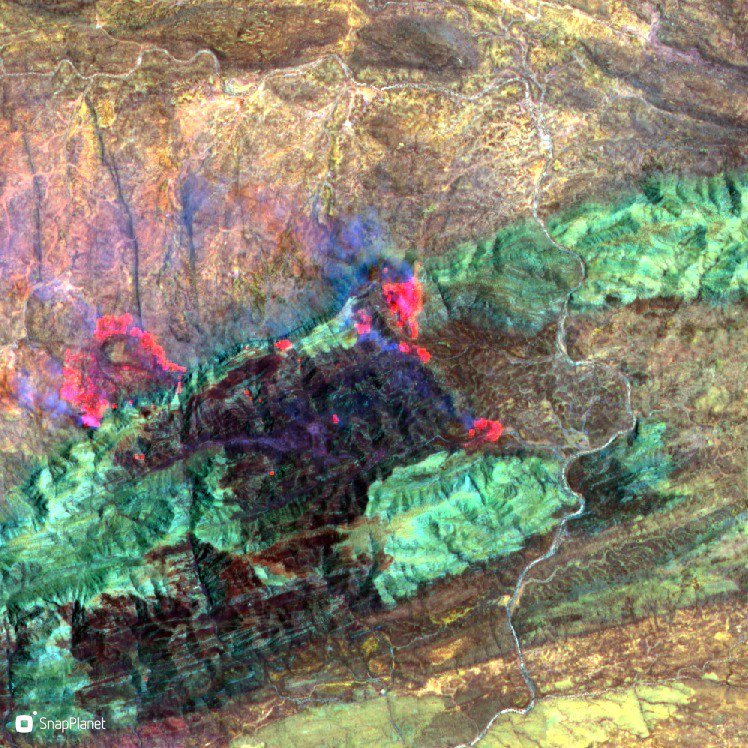 If you haven’t seen it already the Sentinel Hub website is an excellent resource brought to us by Sinergise to help bring tailored web map services into a GIS application or website. You can use the free web map interface to specify date ranges, select off-the-shelf band combinations like True Colour,  NDVI (Normalised Difference Vegetation Index), Moisture Content and others. Sinergise also built a QGIS plug-in for accessing Sentinel imagery where you can get direct access to dates of imagery, minimum cloud cover and band combinations for use in desktop mapping. With a SentinelHub subscription you can set up your own custom web services and generate time series animations (GIFs) over your area of interest. As an aside, our team at Gaia Resources is constantly finding new ways of using these tools and the Sentinel-2 products (check out these blogs where we’ve discussed some of these).

The third day was a separate workshop many of the same industry professionals attended which was more focused on the accounting and policy side of carbon abatement and sequestration. The Department of Environment and Energy  (DoEE) hosted the workshop at the Hilton Hotel in Darwin and reviewed changes to the Emissions Reduction Fund (ERF). The ERF “supports Australian businesses, farmers and land managers to take practical actions to reduce emissions and improve the environment”. As a bit of history (I am just coming up to speed with), in 2015 the Carbon Credits (Carbon Farming Initiative) Act 2011 was amended to bring in the ERF which built on the Carbon Farming Initiative, expanding coverage to encourage emissions reduction across the Australian economy.

DoEE provides climate change advice to the Government, and delivers policies and programs like the ERF methods to reduce emissions and increase renewable energy uptake. The Clean Energy Regulator (CER) – who were co-presenting at the workshop – assess and administer carbon projects under the ERF, and assess project carbon credit reporting. Carbon abatement through controlled burning is one of many types of activities – or Methods as they are referred to – that are eligible for carbon credits (see this link for more info).

The workshop covered the two most recent savanna fire management methods that came in to force in April 2018 – credits emissions avoidance and carbon sequestration in dead organic matter. It was a good chance for me as a relative beginner in this space, to hear about how Australian carbon credit units (ACCUs) are calculated, and differences between the 2015 and 2018 methods.  There was a healthy debate and discussion from attendees as the presenters moved through a number of topics, including:

As I mentioned earlier, being new to this industry meant that there was a lot to take in across the three days (and I’ve probably missed some important messages), but I thoroughly enjoyed the experience to meet new people and to hear their stories. It was also perhaps a chance to apply a fresh perspective to an evolving industry; despite the many ways in which the carbon industry is using satellite imagery and GIS – there seems to me to be a lot more potential there for technology and data science to make a difference. If you’d like to talk about it in more detail hit up our Facebook, Twitter or LinkedIn accounts – or drop me a line on chris.roach@gaiaresources.com.au.