Well, the sun has set on another Savanna Fire Forum, and what a sunset delegates were treated to in Darwin this year! It was almost like the city was putting on a show to honour the hard work done by fire rangers over the previous Dry Season across the north of Australia.

The sunset over Darwin.

After experiencing another dry and extreme fire season in 2019, the Forum was an important gathering of fire practitioners, park managers, policy-makers, ecologists, researchers and carbon industry experts to share knowledge to improve our understanding and practice of savanna fire management. To an outsider – like myself last year – it may seem a bit counter-intuitive that we would consider lighting fires to reduce our carbon footprint; but on a regional scale across two States and a Territory that is precisely what is happening in a deliberate carbon abatement and land management effort. Through careful planning and application of the on-ground knowledge of traditional owners, the controlled burning of savanna grasslands in the early dry season (typically April – June) greatly reduces the more severe late dry season bushfires that are so destructive to whole landscapes and ecosystems. The less burning, of course, means less carbon is emitted into our atmosphere.

The Forum kicked off with Bilawara Lee of the local Larrakia people giving over 320 delegates a warm Welcome to Country, followed by a keynote address from Luke Gosling (MP for Solomon). From there the scene was set with a summary of the 2019 fire weather from the Bureau of Meteorology where we heard about the fluctuations in the El Nino-Southern Oscillation and the Indian Ocean Dipole – a strangely fascinating interaction I won’t go into here but if you are interested BoM provide a monthly Climate Model Summary to describe how these two factors influence weather patterns across Australia. In particular, they help explain why we’ve had much drier conditions in the last two years.

Rohan Fisher from the Darwin Centre for Bushfire Research then presented some great time-series of the burning patterns across WA, the NT and Queensland and stressed how “engagement with traditional knowledge and science in a very honest, open and respectful way… has resulted in the decrease in fire.” The screenshot below is an example where you can see the substantial month-by-month differences between 2019 and 2004 when similar climatic conditions prevailed but the fire management practices of recent times were not being coordinated. It is pretty telling that 44,800 square kilometres (or 4.48 million hectares) more area burned in 2004, and most of it in the late Dry months. By the way, SBS and other media outlets picked up on this good news story with interviews of Willie Rioli and Rohan, and the full set of NAFI animations and graphics produced for the Forum can be found here. 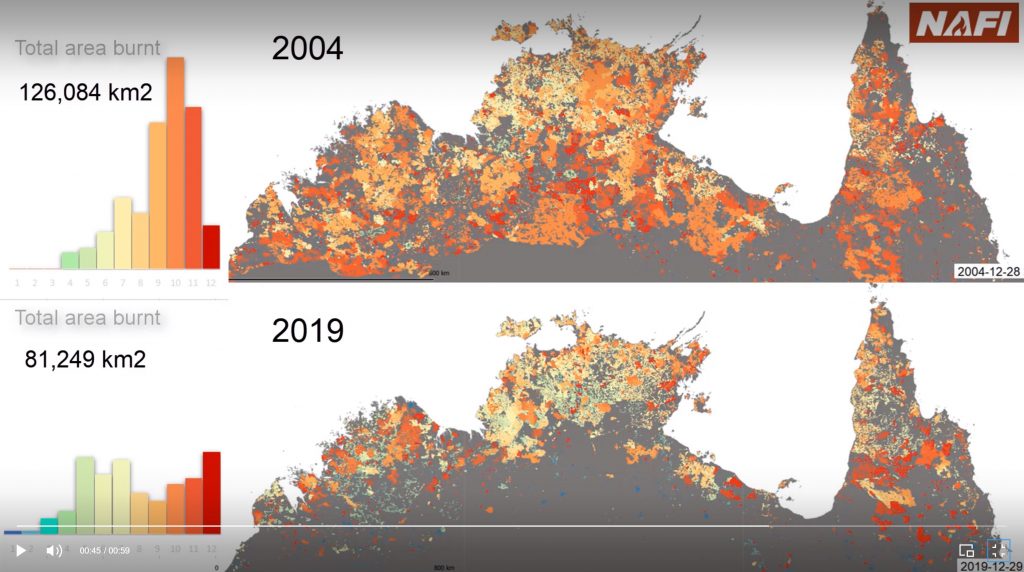 Late dry season burns in 2004 and 2019 across the north of Australia (snapshot of NAFI animation). Burning for the two years is shown by month on a histogram view (left) and corresponding map view (right).

There were some really interesting talks over the two days from ranger groups enlightening us with their experience and success stories on country, economic analysts considering the price of carbon and how to assess co-benefits, and scientists looking at biodiversity research and the relationship between fire management and ecosystem health. It was a dizzying array of topics that looked at important considerations for the industry, with something for everyone involved. A few highlights for me were the breakout session for fire ecology and biodiversity, where for example the Australian Wildlife Conservancy gave us a case study about the impact of fire on the fragile habitat of the purple crowned fairywren.

The Department of Environment Natural Resources presented their research on native mammal population declines in different landscape types across the Northern Territory. In the plenary discussion of fire management on the world stage, we learned about the world-leading fire management practices in Australia compared to other savanna regions, and differences between Australia’s carbon abatement framework and other country’s carbon trading markets. Videos presentations are often a fun change-up, and I think everyone enjoyed the Lion King soundtrack that accompanied a video about the knowledge sharing expedition to Botswana – where indigenous rangers passed on knowledge of fire weather, ignition and management principles were passed on to local authorities there.

I’ve found the Forum to be a great way to network and meet people from a range of professions, and to get a perspective on the challenging activities these people get involved in – from not-for-profit organisations like the World Wildlife Fund to for-profit carbon project consultancies and public servants.

Enjoying a sunset drink and a catch-up at the Forum networking event with Ellie Boyle and Leigh-Ann Woolley from the World Wildlife Fund.

After chatting to a few people about small mammal recovery and ecosystem recovery, one of the things I spent some time looking into was how QGIS, Saga  and integrated field data collection solutions like QField or Fulcrum could play an important role in  planning and evaluation of carbon abatement projects. In fact, as part of the Forum we ran two QGIS training courses on the Thursday and Friday, so I was keen to see how that free and open source product could help industry practitioners beyond the basic production of maps.

On that topic, it was Susanne Casanova (Territory NRM) and others like Ben Corey (Department of Biodiversity, Conservation and Attractions) who got me thinking about how the industry needs to consider other fire metrics beyond the early vs late dry season burnt area statistics, and consider things like fragmentation (or distance between remnant vegetation patches) in measuring the success of a burning program. As far as I can ascertain, early Dry Season burning and its lower intensity fires generally result in more patchy landscapes with greater opportunity for small native mammals to recover. [Note: I would love to learn more from the experts in this field, and understand there are many factors that influence fire behaviour].  These small bits of remaining habitat are important pieces in the biodiversity puzzle as they provide refuge from predators and feral animals as well as food sources. An analysis could be looking at fragmentation and these distance measures in relation to the range distance of a particular endangered species (or collection of species). The resulting data can be an important measure for both planning burning regimes and after to understand how effective the approach has been. QGIS landscape ecology plug-ins together with Sentinel-2 (or higher resolution imagery) look like they provide some great potential for adding value here.

Tracey will give a recap of the QGIS training we have been running lately, but as the first run of it in Darwin I think it was a great success. We had nine attendees for these two one-day courses with representation from the Northern Territory Government, pastoral groups, NRM fire managers and environmental consultancies. Great facilities at the centrally located Darwin Innovation Hub which we will use again, and from all accounts everyone really learned a lot about how to start using this powerful software in their own environmental activities. From the feedback Tracey and I received, we know people wanted another day or an intermediate session, so I will be looking at ways to make that happen and to continue building capacity in the north.

If any of this recap has piqued your interest, or you want to talk about your own adventures in fire management or use of spatial tools like QGIS, please feel free to start a conversation on Twitter, LinkedIn or Facebook, or e-mail me directly on chris.roach@gaiaresources.com.au