This scholarship is awarded to the student with the highest tertiary entrance score entering the GIS course at the Department of Spatial Sciences. This year, the winner is Sean Gilmore – which we’ve announced on our twitter and news feeds already. Here’s the obligatory handshake photo: 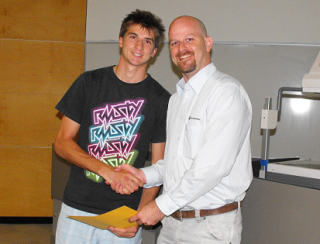 I started the scholarship very early on in Gaia Resources’ history, in our second year. It came about because of a chat I had with Bert Veenendaal, the head of the Department of Spatial Sciences. I’ve sat on a few committees with Bert over the years (AURISA, the precursor to SSI which then became SSSI), and he and I were discussing the lack of GIS graduates. It seems that there just wasn’t people being attracted to the degree program, so this scholarship was my way of helping out there. There was also a Woodside award made at the same time – which also hopefully helps attract GIS students into the profession. Despite these awards, there still seems to be a bit of a shortage of GIS graduates in Perth (and Curtin students still enjoy a 100% employment rate from their GIS course).

The second part of my afternoon was spent helping AJ and Ben (K) deliver a presentation to the software engineering students in the Department of Computing. This is a new venture for us, but basically the students are looking for real world projects to participate in for their third/fourth year project. A whole range of companies participate, and you go in with an idea, present it to the students, and they vote on which they want to be involved in. I think ours was of interest to them – I won’t steal AJ’s thunder by saying anything more about it, but you can expect us to say more about it in the future – so hopefully we’ll be partnering with a few students to do a project soon.

University was – and continues to be – a big part of my life. I’m a serial graduate, and I’m now working on another postgraduate qualification. This is an Energy Studies graduate program from Murdoch University. As you would have seen in other posts, we’re pretty interested in renewable energy here, and when I found the Murdoch course I jumped at the chance to learn a bit more about it. And as an external student, I’ve downloaded all the lectures and course notes ready for my next plane trip east… which is tomorrow (yes, our flights are carbon offset – though I prefer to minimize them if I can!).

So here’s to learning!