We’re just back from the State Natural Resource Management (NRM) conference, where Gaia Resources was a Gold Sponsor.  This is the first time we’ve sponsored the conference so heavily, and it’s because we really want to support the NRM community.  Having a booth to man is always exhausting, but between James, Tracey and myself we had a fun time talking to a range of people from all over the country.  We even compiled a map in our own GRID instance of where people coming to visit us at the booth came from. 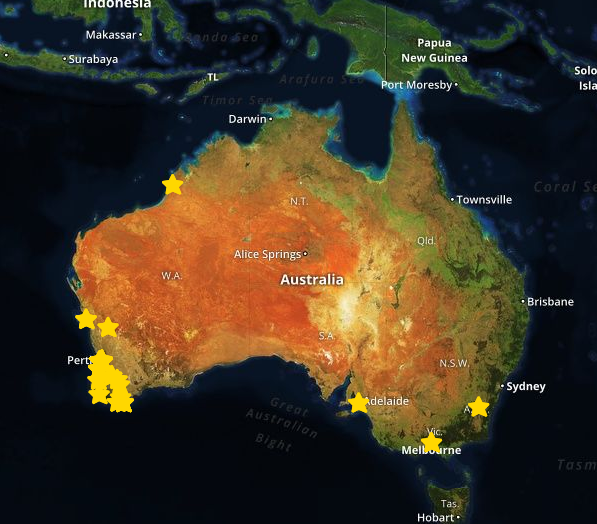 This year the conference was held in Mandurah, on the waterfront – which is a great way to remind you every day about the importance of the management and conservation of our natural resources.  Every day I was distracted by watching sea birds cruise past, and even saw a dolphin one evening in the canals near our accommodation.  Kudos to the City of Mandurah for being the Platinum Sponsor for the event!

The conference started for us on Monday, with the first roadmap workshop for GRID, our easy-to-use online GIS for the NRM community.  This workshop is a major milestone for us and the product – we had great representation from all of the NRMs that use GRID.  The objective was to recap all of the requests that we had received, allow the group to discuss them and identify opposing directions, and to agree on some ways forward.  At the end, we asked the attendees to prioritise the requirements, using “GRID Bucks” that Tracey had prepared earlier.

Participants at the GRID workshop spending their GRID bucks

The end result was just as we had hoped for; a prioritised list of improvements to GRID that the community that has built GRID wants in the future.  From here, we will be providing this list back to the GRID users, and will also be looking for funding – something that we already have been doing and looks like it will eventuate after some positive discussions at the conference.

The conference proper started on Tuesday, with keynotes from former WA Premier Carmen Lawrence, and Denis Saunders, a well renowned Black Cockatoo researcher.  These were a bit ‘doom and gloom’ but were still a good way to set challenges for the audience and for the rest of the conference. I really enjoyed Denis’ talk which was a recap of his research, and a call for more data across Australia so that we can have a proper environmental baseline, something he repeated in the final “Futures” session.  It’s something that the Atlas of Living Australia and the Terrestrial Ecosystem Research Network are both attempting to do, and these projects (while they’ve lost their way at times, at least in my opinion) are important parts of a better future.

Then we had some technology issues of our own.  At morning tea James discovered that my trusty old Dell Alienware laptop had thrown a fit and wouldn’t start.  Investigations revealed the motherboard had finally let go, so I vanished for a while from the conference to get the files recovered from the hard drive and to get a new computer (yes, I splashed out and finally bought the Surface that everyone in the office has been telling me to buy, since all I do is email and Powerpoint these days).  Now I have the fun of sorting out all my files from the old laptop and also setting up my Surface (good thing it’s a long weekend this weekend!).

Meanwhile, day one of the proceedings went along, with many project based talks, including a range of technology ones.  This was dominated by the crew from the Northern Agricultural Catchments Council, who talked about Photomon, NARVIS and Twitter.  There were also interesting citizen science projects like the Aquila project and a good presentation from South Coast NRM about Project Dieback (and the DIDMS project we have developed with South Coast NRM).  One thing I think the attendees learned was that Richard McLellan, the NACC CEO, is a social media machine; one look at the conference #SNRMConfWA2015 hashtag (which is actually the longest hashtag in a conference I’ve seen) shows you how much they dominated the twitter stream.

Wednesday dawned with a few sore heads from the night before (the joint Landcare Awards and the conference dinner) but went straight into an indigenous focus.  There were a range of interesting presentations during the morning, a grab bag of a range of different topics.  Eventually, my turn came up and I got to present my “Efficient use of technology in NRM” talk.

Slides from my presentation (also available on Slideshare)

I’ve given variations of this talk before around the place, but this one I focused on what NRM does (based on the vision in the 2003 State Sustainability Strategy) and how technologies like field data collection, cloud systems, open source software, citizen science and web mapping can help deliver that vision.  I don’t tend to take myself too seriously so we had a bit of fun along the way too, I hope.

The conference wrapped up with a few final presentations and then a panel session on the future of NRM.  This turned into a bit of a pitch about agriculture providing many of the ways forward, but again I really appreciated Denis’ comments about giving natural resources as much focus as agricultural productivity.  It wasn’t the thought provoking panel I’d hoped for (and probably because it was far too short to get into the detail) but it did finish on a positive note for the conference.

The conference was pretty exhausting but it was totally worth it.  As I was reflecting on Wednesday afternoon, it’s not often we get time to talk about the more holistic view with our clients – we’re often called in for a meeting about a specific project.  This conference has really opened up a range of new possibilities for collaboration across the NRM community and I can’t wait to get some of these underway in the near future.