In the last week, two Gaia Resources team members in different parts of Australia have proudly presented their spatial industry perspectives to university students. Up in the Top End, Chris headed over to Charles Darwin University on Monday morning to talk about Free and Open Source (FOSS) software and open data. On Tuesday Sylvia headed to the University of Queensland to talk to students about applications of Earth Observation data.

Chris writes:
Having worked as professionals in consultancy, government and big business throughout our careers, it can be quite satisfying and refreshing to talk to students who are about to embark on their own careers. They are able to get a sense of the environment-focused projects we get involved in, and more often than not we can learn a thing or two ourselves.  It’s part of our on-going commitment to share knowledge of open spatial information and free and open source software, and to support capacity building within the environmental community.  As they enter the workforce our hope is that they take that awareness of these resources into their new teams and projects.

A good example of the available resources is our online QGIS training tutorials – which are a series of Youtube video tutorials we released last year in partnership with South Coast NRM to turn our classroom course material into a more accessible and free format. We had an inkling then that the videos would be a more enduring and accessible learning tool, but we could not have predicted how popular it would be for people around the world. Note: We are very close to being able to release the upgraded version of these videos corresponding to QGIS version 3.4 – so keep an eye out for that. 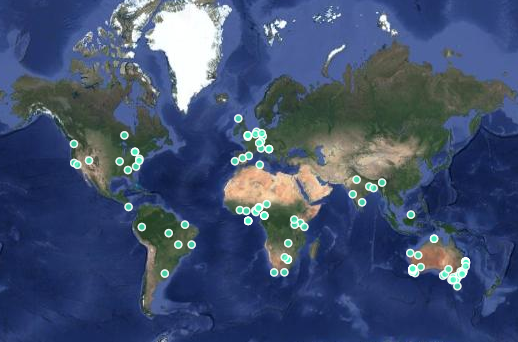 Global requests for our QGIS sample data and manual, to accompany our QGIS videos.

We still run our classroom style QGIS training and have done so for a few organisations in 2019. Rohan Fisher’s (@RohanFisher4) invite for me to talk was in fact an industry teaser into his own classroom training for students of the ENV208 – Geographic Information Systems and Spatial Thinking course, where he adapted exercises with local content and data from Kakadu National Park. While the course is focused on the wide field of Geographical Information Systems (GIS) and thinking about the world in a new way, Rohan was also keen to provide local context to equip students with the practical skills for analysing, visualising and synthesising spatial data. 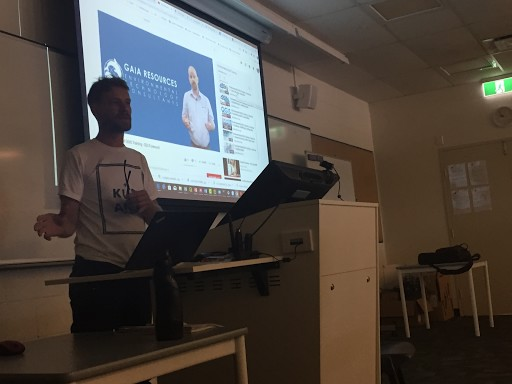 Rohan Fisher started his QGIS tutorial with a mention of our online videos, and a cameo from Piers on screen.

With my introductory talk, I gave students an idea of how we use QGIS and Saga open-source software across our business and as a critical tool in our projects. (We often use proprietary products like ArcGIS as well where our clients prefer it, but we put an emphasis on open-source software use because of its potential for building capacity within our NRM and other clients’ programs and workflows.)

I gave some examples of site selection studies, drone data analysis, and even data quality support for software engineering products like DolphinWatch and GRID. From our friends at Katanning Landcare who use QGIS to evaluate farmers’ proposals for fencing and landcare activities, to IGO who use it to underpin their disturbance and rehabilitation monitoring data management processes.  It is not just about cost savings either. These organisations are adopting these open-source products because they are easy to use, contain loads of useful tools and plug-ins, and there is a large global support community of caring people willing to help.

The other area of my talk was around the open data policies and portal resources available from governments at a regional, national and international scale. I showed how government vector and raster data was available as free downloads and web services on searchable catalogues (e.g. Western Australia and Queensland, Geoscience Australia, NASA and the European Space Agency).  The Northern Territory government, for instance, recognised the need to consolidate publicly available data offerings from several agency sites and to make that content more accessible from a single point of truth – and the NT portal was just released a few days ago.

It was a great opportunity to share some of my project experiences with students at Charles Darwin University, and I’ll be following up with Rohan to see how they made out. It did bring back some pleasant (and not so pleasant) memories of my own university days where I sometimes battled to understand the practical application of the things I was learning. Hopefully, I’ve turned on a few light bulbs with this crew and who knows I may be working alongside them in years to come.

On 21 May 2019, I and four others were invited to present to undergraduate students of the School of Earth and Environmental Sciences, University of Queensland.

The students that we presented to are enrolled in an Introduction to Earth Observation course delivered by Professor Stuart Phinn.

Stuart’s course had covered the theory of Earth Observation (EO) data including:

The course had also exposed students to some of the research applications of EO data within the School, such as used in coastal marine studies.

In addition to research applications, Stuart was also interested in exposing his students to how EO imagery is used by industry and government groups and hence his approach to my colleagues and I to speak about how we use EO data in our work.

Stuart had chosen a diverse range of applications and organizations to present to his class, including EO and spatial specialists from 3 commercial companies and from 2 government agencies.

On behalf of Gaia Resources, I described how EO data was used in two of our spatial projects i.e. the Malleefowl Site Selection Project and the Telfer Mesa Detection Project. 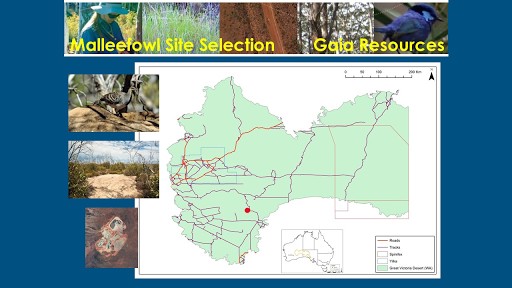 I am pleased to report that Stuart received comments from a number of students saying how helpful and useful our presentations were in giving context and application to the theory that they had studied. I hope that we may also have encouraged some of these students to consider spatial science and particularly applications in Earth Observation as a career.

I am also very thankful to Stuart for inviting me to present on behalf of Gaia Resources. There are so very many exciting and interesting applications of EO data that we use in our business and it is my great pleasure to promote and advertise these; but I am also always very excited to learn about any new and innovative applications of this wonderful information source.

Feel free to drop Sylvia or Chris a line to ask about QGIS, open data, Earth Observation or anything we discussed, or start a conversation with us on social media via Facebook, Twitter or LinkedIn.