Last night I attended the Dolphin Watch volunteer training night and was one of 180 people that came along to the night to be trained and to learn how they can participate in the project at the Horizon Planetarium at Scitech (which is always an interesting venue!). Unlike the other 179 people, I got to wear two hats.

One hat I wore was my Gaia Resources hat, where I gave a quick talk at the end of the night about how to use the Dolphin Watch app we produced a while back (as outlined here).  It was only a very brief introduction to the apps – as necessitated by a 5 minute slot at 8:20pm!

The other hat was given to me on the night, and it is a Dolphin Watch hat.  I’ve signed the forms and gone through the awareness training, so I’m now accredited as a volunteer.  Over the next few days, I, along with the other volunteers, will get our welcome emails and information so that we can start to officially undertake surveys around the Swan River.

We often deliver services to citizen science groups through Gaia Resources, but this is a good opportunity for me to be on the other side of the table.  So once I get the introductory material I will be heading out to do some surveys around the Swan River looking for the resident Tursiops aduncus dolphins. 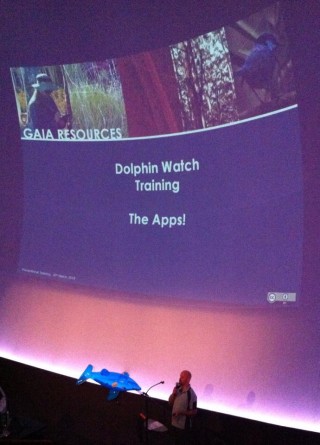 One of the reasons I decided to volunteer to the project is to be involved in an exemplary citizen science program from both sides.  The way that the team at the Swan River Trust run this project is just fantastic, the small team involved do an amazing job of engaging with volunteers and it’s hard not to want to be part of that culture and project – even if they do drag you on-stage to role-play a baby dolphin, then make you do stair climbing to deliver prizes to the volunteers.

Find out more about the Dolphin Watch program at http://www.riverguardians.com/projects/dolphin-watch/.