I’ve been with Gaia Resources for six years now (!), and grateful to have found a home where my specialist knowledge of taxonomy, systematics and biodiversity informatics adds value to the enterprise.

I remain a research associate at the Western Australian Herbarium, both in order to continue my research into WA’s heaths – the Ericaceae – and to provide some institutional services.

One of these has been to collate and summarise significant changes in flora statistics from year to year, starting with the publication of the Descriptive Catalogue (Paczkowska and Chapman, 2000). This included a simple table of major floristic data, and a comparison with previous stats from the past century (updated here in Figure 1).

Exactly the same data was also used in a major paper comparing species richness and endemism in Mediterranean biomes (Beard, Chapman and Gioia, 2000). All this was made possible by my work with the greatly missed Paul Gioia, with whom I built the first statewide census database for vascular and cryptogamic flora – WACENSUS – begun in 1990. Of course, there were previously printed publications by John Green (1981, 1985) and maintained in supplement subsequently by Nicholas Lander, that provided the initial source data. The WACENSUS database, however, enabled real-time documentation of plant names in play for the State, and an immutable Life Science Identifier (LSID) that could be referred to across information systems.

In that time, we have seen the flora statistics document a steady increase in the number of species, both published and ‘putative’ (i.e. manuscript and phrase-name taxa), grow steadily (Figure 2). 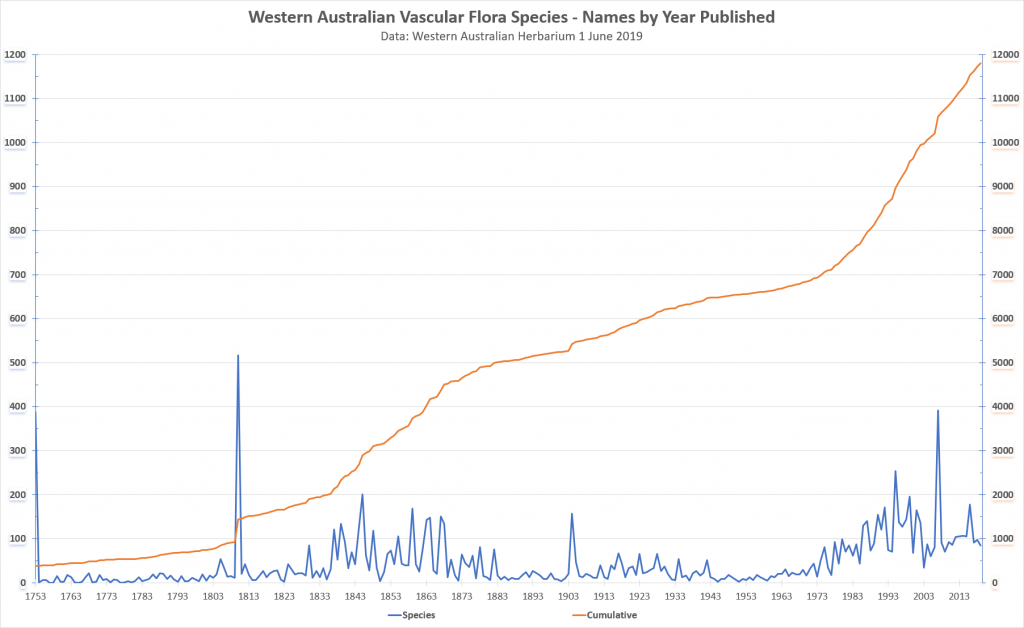 2020 marks a number of milestones for the State’s documentation of our precious and unique flora:

In the intervening years, Paul Gioia worked to manually integrate the Western Australian Museum’s faunal names into the Census as well, in order to maximise that knowledge in his major work – NatureMap (2007 onwards). As a result, WA has a standardised names dataset for much of the biota of the state.

It is very heartening to me to see the development of the next generation of WA’s biodiversity information systems through the work of the newly-funded Biodiversity Information Office – see last week’s post.

Yesterday, I received the 2019-20 flora statistics data, from which I will extract the significant highlights and changes for the past year. This complex report was only automated (after years of testing for veracity against my manually-calculated version) in 2019. Again, this could not have been achieved without the dedicated work of Paul Gioia, Ben Richardson and the invaluable curatorial team at the WA Herbarium. These results will be published in FloraBase in coming weeks.