We’ve been working and partnering with some Queensland based Natural Resource Management (NRM) groups to expand the services we offer to this sector, and we undertook a recent project to develop a proof-of-concept to use Virtual Reality (VR) to help with decision making up in the area managed by Northern Gulf Resource Management Group (NGRMG).

During the National NRM Conference held in June in Coffs Harbour (you can read our blog about that if you’re interested), we met John Brisbin from the NGRMG. He had already started doing some interesting work in Unity 3D to model erosion in the gulf region. We continued a dialogue after the conference, and thought it could be interesting opportunity to increase the scale of this type of work to assist decision making.

As proof-of-concept, we began working with some of our initial datasets to model out parts of Western Australia to see how we could integrate data from sources like QGIS and drone photography into Unity, so we could export out a mobile app. We then leveraged Android’s VR capabilities so we could then use the app in cardboard to create VR experience.  We showed John Brisbin our work and discussed how this concept could be used to assist decision making in the Northern Gulf area.

The problem we decided to look at was how we could visualise the suitability of irrigated agriculture and water storage in the Gilbert River catchment. In this space there is debate about the viability of using the Gilbert River for water storage and irrigation, and we thought that by producing a VR product to simulate the effects, decision makers would be able to see the areas impacted, how large the irrigation zones, and the suitability of the land.

In summary, this is how we believed VR could assist decision making:

So next up, came the elephant in the room. Having enough data to make a meaningful VR simulation to assist the decision making process.

As this was a proof-of-concept project with a limited budget, it would not be possible to model the entire Gilbert River catchment (almost 47,000 km2). To select a target area, we drew upon the research of the CSIRO, and a recent report (Petheram et al, 2013).  Within that report the CSIRO had performed a number of feasibility studies into potential dam sites, and looked at the water storage capacity of these sites. Also, a large amount of soil profile data was released to the CSIRO’s open data portal.  We then matched the irrigation requirements of crops in similar climates to identify the size of an area that the dam site could potentially water. With this information, and we modeled a likely dam location, as well as a potential irrigation site just downstream to narrow down the target areas of the VR app.

Jake was allocated the job of making all of this possible, and so over to him to describe the steps taken:

We began with testing a few approaches to this task, as it was a fairly new set of technologies for us. There were initial discussions and tutorials floating around, but nothing concrete and sufficient enough for our needs. Many people seem to have over-complicated the process, while there were some simpler and more efficient workflows that seemed to be able to be used instead… so, our approach was to solely develop the application inside of the Unity engine, a 2D/3D game creator. Best of all….it’s free for most use cases (you can even try it out!). With its large community forum and active participation most problems we encountered could be researched and fixed in no time whatsoever.

Once we had our virtual reality framework up and running, it was time to integrate some data. To produce a real world terrain in Unity was to allow for a clean and careful methodology. The simplest approach was to set up a layout in QGIS, and export all the layers intended for Unity as images, something like the diagram below: 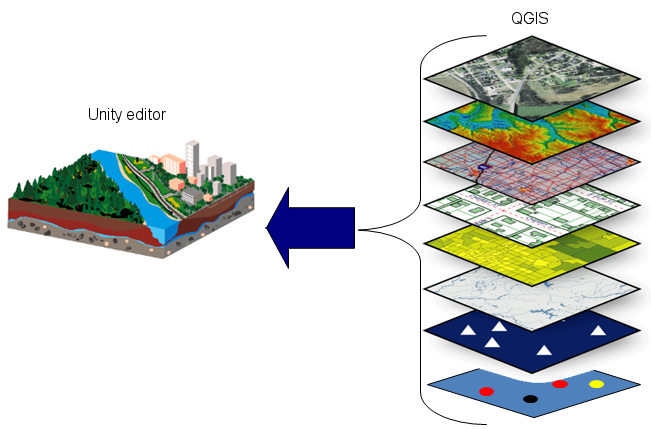 We took a range of layers in QGIS, exported them as images, and then brought them back together again in Unity

The terrain (a Digital Elevation Model) was imported through a script in order to produce a 3D view, while our soil and topographical datasets were overlaid as textures. Now we had our basic set-up, it was time to add interactivity.

This is not that simple – because the person using Google Cardboard only really has one button. Therefore, we broke it down to basic “on-click” functions, such as if you click somewhere on the terrain while on-ground, you would move to that destination.  But to integrate other functionality, we used a Heads Up Display (HUD) to swap layers (soil/topographical), swap positions (on-ground/overhead), swap scenes, and display legend information. Here’s a little sneak peek…

A simulated view of the 3-D setup

So in all, through this partnership with NGRMG we were able to produce a Virtual Reality model of a potential dam and irrigation site in the Gilbert River catchment. This approach seems to be able to help relevant stakeholders in the decision making process by creating a visual model of the land affected, provide an efficient method to explore suitable sites, and to help assess the viability of such land use changes.

What’s next? Well this was a proof-of-concept, and we’ve shown it is possible, and there certainly are benefits. The next step is to find look at simulating larger use cases, model new requirements and incorporate more data – stay tuned.  In the meantime, leave a comment below, drop me an email, or start a conversation with us via Facebook, Twitter or LinkedIn.

Petheram C., Watson, I. and Stone, P. (eds) (2013) Agricultural resource assessment for the Gilbert catchment. A report to the Australian Government from the CSIRO Flinders and Gilbert Agricultural Resource Assessment, part of the North Queensland Irrigated Agriculture Strategy. CSIRO Water for a Healthy Country and Sustainable Agriculture flagships, Australia.