Hi, my name is Jake Geddes and I am the newest Spatial Analyst at Gaia Resources. I have been here for just over three months and in this time I have already worked on a number of challenging projects.

I went to Curtin University and gained my Bachelor of Science degree in Cartography/Geographic Information Systems (GIS). I wrote my thesis on the comparative difference between freely available open source GIS software (like QGIS, which we run training in here) and proprietary GIS software for environmental management.  I have previously worked for the Department of Parks and Wildlife as a Cartographic/GIS Officer, which gave me a good grounding to broaden my skills (and given Gaia Resources’ focus on the environment, actually was really useful in my work here).

GIS technology is still something of an unknown to a lot of people, having been on the receiving end of a lot of blank stares explaining my profession. My favourite response is “So, you can use Google Maps pretty good then?” Yes. Yes I can. With the emergence of so many free and open source software packages everyone has the ability to view and tweak spatial datasets, so it’s only a matter of time before people are accustomed to the basic terminology and gist (see what I did there).

Apart from my love of GIS and technology, I have played soccer semi-professionally most of my life. I even got to go to the World Cup in Brazil! 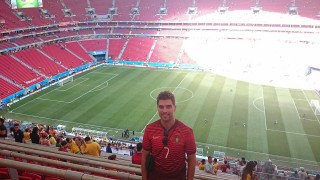 Jake at the World Cup in Bazil

Here is some of the projects I’ve been working on recently….

In our spare time, we also have been doing some research and development – I’ve been working on the data from the Dolphin Watch project to create an animation of dolphin sightings on a month by month basis to find any correlations, as well as creating heatmaps from dolphin group sizes.

With the ever increasing need for spatial data I am excited to be part of Gaia Resources’ spatial team. The environmental industry is such a broad yet distinctive industry in which spatial technologies can be used in a wide range of problem solving – from helping predict the occurrence of feral species through to creating datasets of environmental assets for conservation.

I feel I have a lot to contribute to the projects and team here at Gaia Resources and I look forward to some new and exciting GIS projects.