I’m just back from a trip to Japan, where I tested out a new gadget on the slopes of Niseko while I was snowboarding – the Zeal Optics Z3 GPS Goggle.  I also took along a GoPro Hero HD Pro 2 camera but in my rush to pack everything, I didn’t take the right helmet attachment kit, so I didn’t end up using it during the trip.  However, my sister-in-law brought along a GPS enabled Panasonic Lumix camera, and we got some geotagged photos from the trip as well.

The goggle itself looks just like any other goggle.  The only visible sign while you’re using it that something else is going on is that you wear a controller pad (in my case, on my arm) so you can interact with the goggle. This lets you set runs, put it to sleep when you’re on a chairlift, etc.  Of course, that drew the attention of a bunch of people, and I had to explain it a few times (especially to gadget-mad instructors).  It’s a pain to take off a goggle when it’s clipped into your helmet, and it’s negative 20 degrees Celcius (and you’re bald!), so that was a bit annoying, but fun to talk about tech in between learning how to paddle the board and do 360-degree spins.

The Z3 works by having a GPS in it, as well as other sensors for barometric pressure, temperature, inertia, a compass – and it uses Bluetooth to wirelessly communicate with the controller on your arm.  The goggle includes the MOD Live setup (http://shop.reconinstruments.com/Product/MODLive/900-00007) from Recon Instruments, in a Zeal Optics goggle (with all the wonderful lens tech that that includes –these goggles are damn good in a range of conditions without the GPS!)

The GPS HUD inside the goggle is unobtrusive, although it doesn’t really look like it the photo below.  Within a few minutes of having it on for my first run, I was ‘boarding with no problems, and could just occasionally flick my focus to it to see what’s going on.  The functionality of the Z3 is pretty useful when you’re on the slopes.  If you wanted to traverse from one ski run to another in the backcountry in Niseko, there’s advice to say keep above a certain altitude – so having the altitude sensor is very useful for that.  It also tells you some stats like speed, temperature, how many runs, distance covered, etc, which are all fun to look at during the day. 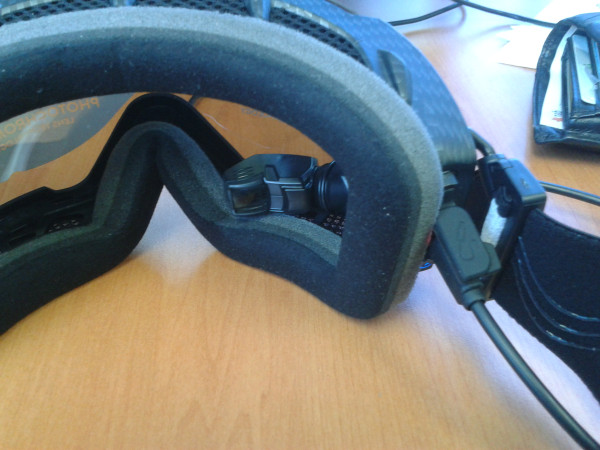 I was most concerned about the power and battery life.  However, the unit will easily last the whole day, assuming that you put it into power save mode when you’re on chairlifts.  It will still record position while you’re on the lifts, even in power save mode, but it turns off the HUD.  On the first day, I had the HUD running constantly, and it ran out of power about 2pm (starting at 8-ish).  However, when you turn it off on the lifts, it easily lasts the whole day, assuming it’s got a full charge from the night before.

I would note that I didn’t have the setup to take advantage of other functionality, like the buddy tracking setup, text messaging, caller ID, or playlist management.  You can already see that there’s a lot more to this system than just being a geogeek and tracking your runs (and Tweeting about how many km’s you did every day).

The real fun part (back to geogeekery) is at the end of the day, when you get back, connect the goggles via USB to your laptop, and download the runs.  The Recon HQ software that you install then overlays the runs on a Google Map view, and you can interrogate runs, highlights, etc through that software.  Then you can, export the runs from the Recon HQ software to KML format to view them in other packages.  However, these files are pretty huge – a day run is a 9-12MB KML file – so I asked Akeal  to strip out the files and then drop them over a Google Map in the blog below… 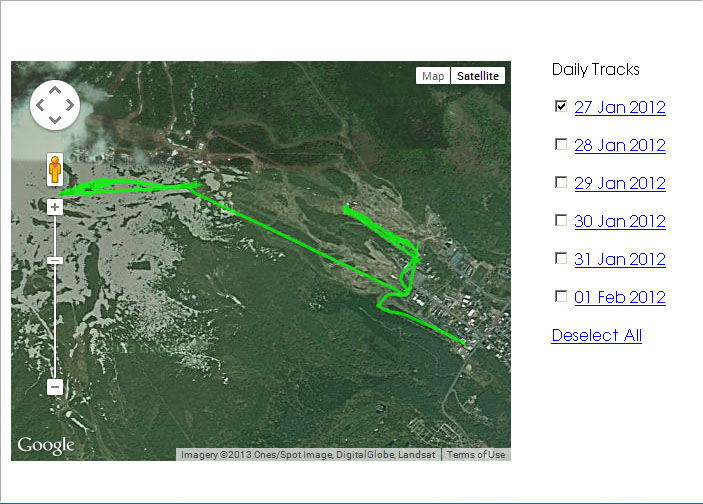 The files that are stored in the Goggle include a range of different attributes you can play with to do all sorts of things.  In the KML export, these are point locations, that include the latitude, longitude, time elapsed, distance elapsed and speed.  I’m sure there’s a lot more data stored on the Goggle files as well… but I reckon with a bit more playing around I could also download the X, Y and Z values and create some 3D models with this tech (I can’t wait to have an excuse to comprehensively ‘board the entire mountain next year).

I found a few very minor downsides to this setup, noting two things in particular:

They’re really minor things, but things that you might need to consider depending on your application.

The tech in these goggles is pretty amazing, and the usability is spot on (even with some controller problems as above).  The Recon MOD Live unit will have a huge range of other applications out there, it’s based on the Android OS, and I can see a bunch of fun things that this sort of tech is going to let us do in the future.  I’m pretty sure that the Gargoyle of Neal Stephenson’s Snow Crash novel isn’t that far away – especially given how many Hero and other cameras I saw on the slopes this year.

So in terms of a review for the goggles? Just buy some if you’re either a geogeek or if you’re keen on good goggles for your snow activities.  They’re pretty costly, but it’s worth it.