As part of our ongoing work with the Department of Parks and Wildlife, we’ve been recently involved in the redevelopment of the Wildlife Licensing System.  The system was released in January and has been well received. 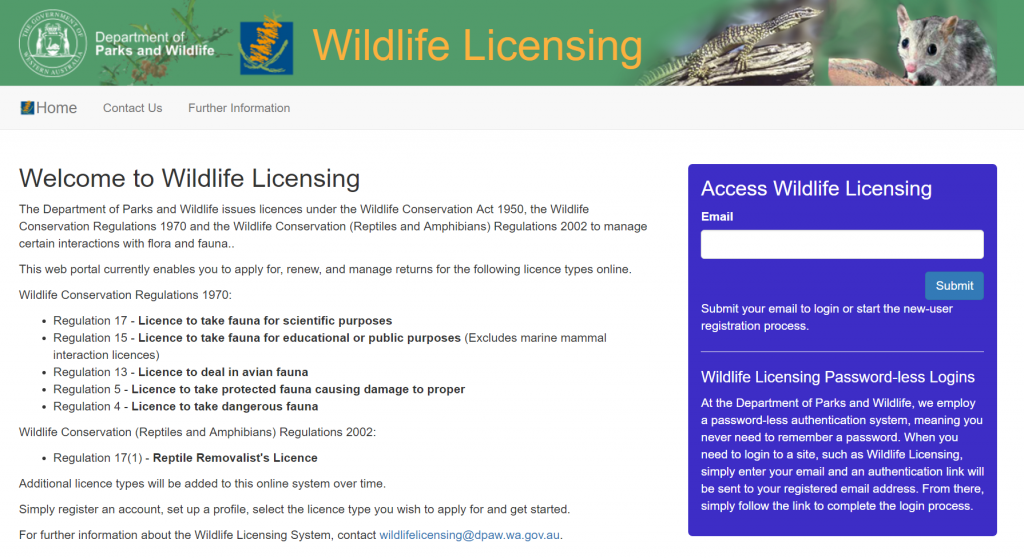 The previous Wildlife Licensing System (WLS) within the Department was starting to show signs of age, and with some of the reviews and planned improvements, the replacement of the WLS was seen as a high priority.

Our team – Tony, Serge and myself – were brought in to work closely with the team from the Licensing branch, and with representatives from the Science and Conservation Division (SCD) and the Office of Information Management (OIM) for the delivery of this system.

We worked with the team using Agile methods, meaning that we ran the project as a series of sprints, which was a good approach in this case, and one that we are quite familiar with.  We ended up focusing sprints on not just epics (such as “Application Lifecycle”), but also on the delivery of particular licence types.  The Agile methodology can deliver great outcomes for clients; this project was no different.

While Tony, Serge and I worked on the main WLS application, the SCD and Licensing team were gathering additional requirements for the next sprint, and testing the work we’d done in the previous sprint.  This meant that there was a lot of people spending time on the project, but it also is one of the reasons it has been so well received.  Meanwhile, OIM supported the project with a project manager and also developed other supporting systems, like the password-less login component and the payment gateway, which our team integrated with.  We also had the OIM team undertaking code reviews and doing the builds for the project.

To help keep this broad team together, the Department became our home for much of the last few months.  That had upsides in that we were able to have access to the clients pretty much on-demand (and roasts on Thursdays at the canteen), and downsides, in that we were away from the rest of the Gaia Resources team and working in unfamiliar surroundings – but once we were buried in the project, it quickly became familiar surroundings.

One of the things that we realised is that we were quite lucky to have a client in the Department of Parks and Wildlife that had already embraced Agile methods, and in addition is a real proponent of open source solutions.  The WLS is another of their projects that will be made open source and available through their Github repository .  While Piers might sometimes despair about the uptake of open source in Australia (see his clickbait article here) there are some organisations that are making the most of it – like the Department.

If you want to know more about how we can work with you in this Agile manner, feel free to get in touch with me via email, or have a chat to us on Facebook, Twitter or LinkedIn.