Sometimes shaking things up a bit in your job is exactly the ticket you need.

I had that opportunity recently when our partners at Outline Global (who capture high resolution aerial imagery for the Northern Territory Government) called me up and asked if I could wander around the Darwin region looking for Ground Control Points (GCPs) that had been surveyed in 2019, and give them a bit of a zhuzh… a bit of a refresh…  a lick of new paint… a new lease on life as it were.

I jumped at the chance to get outside and do some ‘field work.’ Ok, it’s a far cry from my days as a geologist stepping off helicopters onto remote mountain ridges… but hey when you spend the majority of your time tapping a keyboard and clicking a mouse, this is an opportunity with a lot of advantages. Firstly, there’s a lot of the Darwin region I had not seen. Then there’s the sunshine and beautiful conditions of the Dry season, the chance to use some free tracking apps… it was a bit like an easy but widely distributed Geocaching excursion.

What are GCPs I hear you ask? These are temporary survey markers that are obvious control points visible from a plane capturing aerial imagery. The plane criss-crosses on a structured flight plan, so that the resulting imagery strips have significant overlap and can be used for post-processing. Analysts use software to find the GCPs in overlapping images to ‘register’ the imagery and create an orthorectified mosaic. To go through this process with a high level of accuracy you either need to re-use old GCPs with known surveyed coordinates, or conduct a new survey.

You see, these dilapidated white markers were in need of some TLC. Some were little more than a bunch of painted white rocks assembled in a cross and referenced in the previous survey report, and it is not surprising that in the parks and public places they were placed two years back, that someone thought: ‘Well, that is a collection of rocks that is just begging to be kicked.’

An example of a GCP located out at Lee Point. On arrival the marker and cross (left) were barely recognisable. The refreshed GCP (right) will now be visible from the aerial imagery. (right)

To be fair, it is not surprising in that time that these mysterious assemblages would have experienced both human and natural wear and tear, such as blustering winds, monsoonal rains, people with anarchistic tendencies.

So here I come smiling away with my set of 23 waypoints loaded up onto an free and open-source app called OpenGPXTracker and a can of white spray paint. I also brought my laptop along for the ride with a QGIS project with the waypoints and OpenStreetMaps. This was my regional view to help me plan my route,  but I also had the original survey report on the laptop as a reference. I also made sure to bring along plenty of water and a first aid kit.

Across two days, I navigated to the coordinate positions, and followed a bit of a process at each destination:

As the tracklog map below hints at, there was a fair bit driving, a number of little dead-ends where the map was a bit ambitious about what constituted a road. There was one that turned out to be a 10km bush track along a fenceline that connected two sealed country roads. Initially happy to find the short-cut, I was soon glad to have brought the 4WD so I could avoid getting bogged in the sandy ruts on that track. 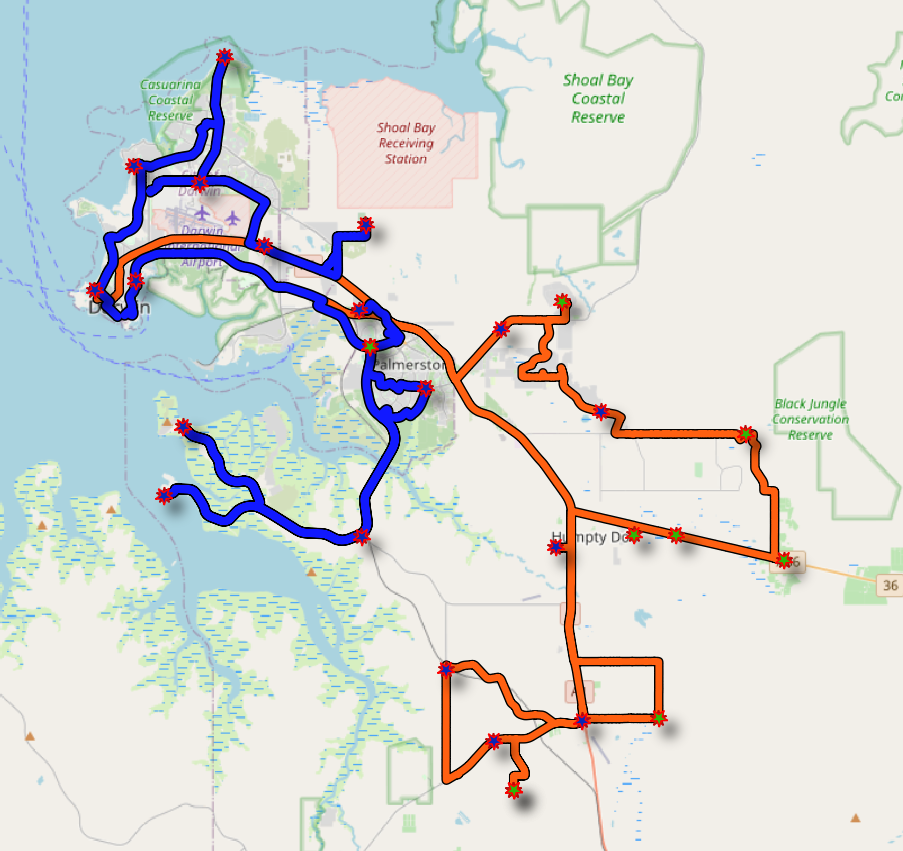 It’s a dragon! Ground Control Points and routes travelled across the Darwin and Humpty Doo region. Day 1 (blue) and day 2 (orange) are shown.

I got to see parts of Darwin you don’t often drive to unless you have a work responsibility to be there, or are a keen fisherman. Apart from the mundane manhole cover on the side of the road, there were termite mounds and historical sites. For instance, Channel Island was a bit of a drive but was an interesting spot with its power station, jetty and historical uses as a quarantine hospital and leprosarium dating back to the early 1900’s. The GCP there by the way was a damaged sign that I think someone must have backed into with their boat!

So now you are up to speed with my field work out of the Darwin office of Gaia Resources! Hope you found that somewhat amusing, but if you’d like to learn more about the imagery being captured, or other projects we get involved in the Top End please feel free to contact me or start up a conversation on Twitter, LinkedIn or Facebook.