Thanks to the efforts of one of our team, Voon-Li Chung, we went on a “virtual scavenger hunt” (later dubbed “the Metrogaine”) last Friday.  Voon-Li made it all happen while working on other projects during the last few weeks, and Andrew and I came along for the ride … or run as it were. 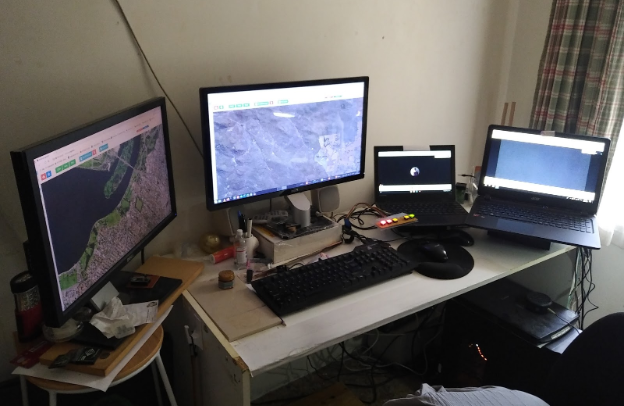 All the game-specific technology for the app was written from scratch by Voon-Li:

Meanwhile, a Google Meet Hangout was also running with the team on it, providing instructions to the field officer about where to go, and providing the rest of the team a view of what was going on out in the field.

At the start of the game, we were provided with a set of target points from Voon-Li, which were displayed on the map (see below). Only the team back in their homes (we’re not office based at the moment due to COVID-19 of course) could see these points on the map, not the Field Officers.  So the teams guided the field officers to these points through the Google Meet setup – our chest-mounted phones were also showing a live feed of us running around – and once the phone’s reported location was near the point, then a question popped up for the teams to then answer. 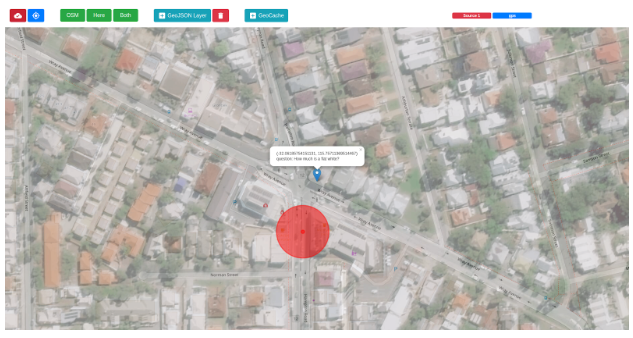 This was a pretty fun and safe way to spend a bit of time on a Friday afternoon, and Andrew and I got to exercise and still remain physically distant from people around us.  For the team back in their home offices, they remained socially connected while physically distant, and for Voon-Li, well, he had a great time being the game master and listening and watching us run around in circles.

We learned a lot about various pieces of technology that we used in the project, so there were also a bunch of good outcomes for us there apart from just morale-building, but in these interesting times with a lot of stuff going on around us all, it was great to have some downtime and a bit of fun.

I hope you are all finding ways to stay safe, healthy and happy as well.

Posted in Blog, Business | Tagged: business, coronavirus
« Plugging into data and map automation in QGIS 3
An update on our Coronavirus response »