Call us on +61 8 9227 7309
Facebook16
Twitter0
Google+0
LinkedIn9
Hi there, I am Robert (or Rob, I can never decide), a somewhat nomadic newly employed Software Engineer at Gaia Resources.
Originally South African, but now a New Zealander*, I left Auckland at the end of 2014 after ten years and moved to Perth to join the rest of my family – primarily to give my two sons the opportunity to grow up with grandparents and cousins, but the extra baby sitters are definitely a welcome benefit. 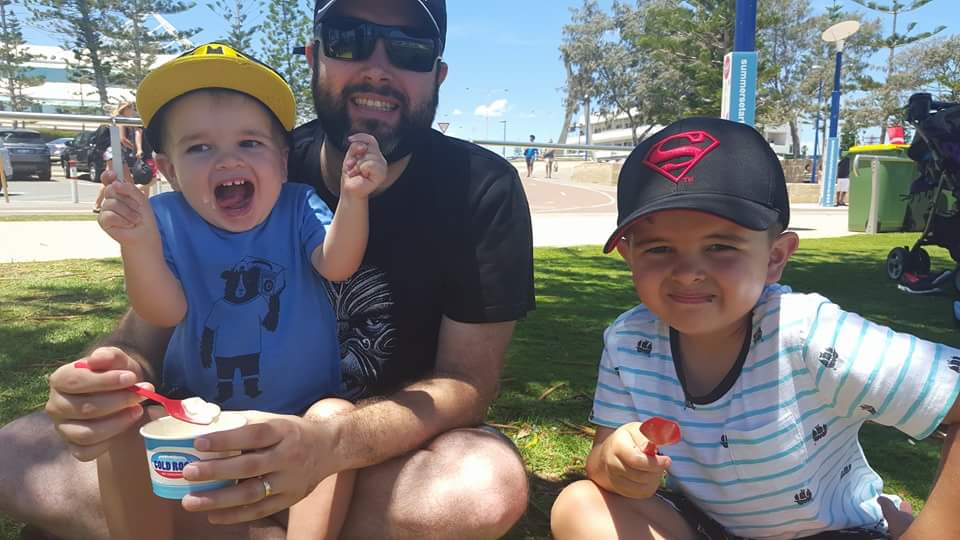 Rob and his boys!
I was initially drawn to anything relating to a computer when my family first acquired a second-hand IBM (compatible) XT machine in the mid-to-late 80s. Being a fairly underwhelming machine I spent the majority of my time copying BASIC programs from magazines and later reading through the entirety of the bundled help documentation with Microsoft’s QBasic.  From that point onwards every ounce of money received from birthdays, Christmas and eventually school holiday work spent crawling through ceilings to lay network cables for a local IT consultancy, was spent on upgrading that machine.
My professional career has been rather varied over the last 15+ years. Ranging from Hardware and Software Support, to Systems Administration, Software Testing, Software Development and finally Software Engineering. While software development wasn’t always the primary function of my role, I actively pursued it as a hobby and managed to squeeze it into my work whenever I could.  Eventually around 2007-2008, once I had had my full of software testing, I managed to convince my employer at the time to move me over to a full time development role, and I have been far happier ever since.
Gaia Resources is definitely a change of pace compared to my previous roles which have all been within the private sector. Focused either on selling products or time in the forms of advertising, banking or even online gambling. The solutions provided by Gaia gives me the chance to devote my time to causes that are perhaps more worthy of attention.
In my spare time you can usually find me playing video games, watching e-sports and reading fantasy novels. So as you can see, the nerd infection is fairly comprehensive. In my defence I know a few chords on a guitar and can play the intro to stairway to heaven…

You can leave a comment below, email me directly, or start a conversation with us via Facebook, Twitter, or LinkedIn – feel free to get in touch!

* Piers’ note: That makes three Kiwis in our office now! Oh, and the “ain’t got time for small coffees” tag you’ve seen on social media – that’s a direct quote from Rob this morning.
Posted in Blog | Tagged: business, software engineering
« Welcome to Gary!
ALA Science Symposium »