I’m just back from a holiday (of sorts) to Europe, where we visited friends in England, and then went to Vienna for a conference for Jeanie before we went to Salzburg and Munich.  However, the purpose of this blog post isn’t to make you jealous, but to provide details of some software testing I did while I was away…

For some time now, we’ve been working on citizen science projects, starting with the Atlas of Living Australia.  We still manage the Biological Data Recording System (BDRS) open source codebase, and are implementing this for a range of other clients these days.  However, we’ve also been working on native mobile applications to interface with the BDRS that remain outside of the open source code base, giving us more freedom in terms of development, and these are being used not just for citizen science projects, but also for professional science projects as well.

Being a bird nut, I decided that I’d test one of our first products from our closed source code base, a native Android mobile application for recording observations and synchronising them to our own BDRS (now with over 12,500 records in it).  My aim on this trip was to test it for recording birds in Europe, using my Galaxy Ace phone – specifically in a place where I didn’t have a reliable internet connection, I didn’t really know the birds particularly well, and hadn’t preloaded an entire European taxonomy to the system to start with.

Over the course of the trip I recorded a lot of pigeons, and a few more interesting species, and gathered some good feedback for the team back in the office.  My distribution of records is shown in the map below, clustered across the sites I went to. I recorded 193 records, and 43 species on the trip.

During the trip,when I saw a bird, I’d grab out my phone, fire up the app, and then record the species.  If I didn’t know what it was, I’d put in some descriptions, and snap a photo either with the phone camera, or with our little travel point-n-shoot camera we tend to use (lugging my SLR around is a bit of a pain).  So there are a few photos on the camera of me paying attention to small brown birds, instead of the fantastic scenery, like this: 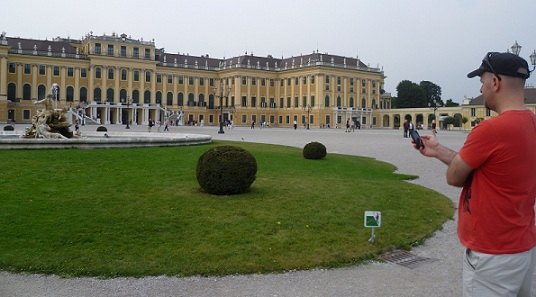 When we got back to the hotel, most of which had wifi of some sorts, I’d connect and then synchronise my phone back to the server in Perth – which even synchronised the photos on my phone.  Admittedly, I could have done this on the spot – if I’d wanted to pay the exorbitant data charges – but having free wifi meant that I could do this for free when at the hotel.  it also shows you that you don’t have to be connected to use the app in the field.

Now that I’m back in Perth, I’ve got a bit of tidying up to do of the records.  There are still a few species that I need to get some clarification on, and I’m currently uploading the photos from the camera to the web site by editing the records and attaching a new picture to those records.  I’m also updating the taxonomy in the system to add in the new species I recorded.  There was also a few bits of feedback on the app itself that I’ve sent through to the team to look at in the next round of work, which will help with the future development.

The app itself has also just been tested out in the field by AJ with Rio Tinto staff up near Newman, as Rio Tinto now have a production BDRS server, twinned with this new Android based application, running for their botanical staff.  AJ was in the field last week while I was in Munich; his trip was a bit different than mine…

If you want to know more about our mobile applications or capabilities in that area, then feel free to drop either myself or AJ an email (me, AJ), or follow either of us on Twitter (me, AJ).